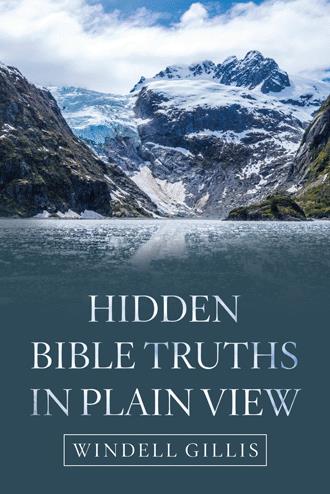 Challenged in his beliefs concerning the nature of God, the author began a thorough study of the Bible and history in an attempt to correct the challenger on the debated issues. Hidden Bible Truths in Plain View is the result of the author’s in-depth study and research.

His research began in Antioch where the Word of God was first published and proceeded through scriptures and Bible history to trace the path of the pure Word as taught by Jesus and his apostles. Jesus Christ, the greatest teacher who ever lived, taught the apostles who he was as well as all things concerning God. Today many believe that the apostles somehow remained confused. This could not be further from the truth as the author gives details of scripture and history that reveal information that has been hidden only because of the way the Bible has been taught. The author details how most of God’s greatest early leaders, such as Paul, Peter, Clement of Rome, Polycarp, and Ignatius were martyred by the Romans for their beliefs.

Satan made many attempts to destroy any trace of one particular group of believers who lived in the valleys of Northern Italy and Southern France during the first century. Taught directly by the missionaries from Antioch around 120 A.D., this group translated the scriptures into Latin by 157. Even though the Pope sent armies to destroy them several times, God protected them because they remained in obedience to His true word and free from the corruption of the Word by the Roman Catholic Church.

Only God can create as he created the true Bible path. The author discovered many great men in the true path, men such as John Wycliff, who translated the first handwritten Bible into the English language around 1388. Forty-three years after his death, the Roman Catholic Church dug him up and burned him.

John Rogers, in 1537, translated the Matthews Bible. Mary Tudor, known at Bloody Mary, the Catholic Queen of England, was determined to return England to Catholicism. In 1553 she had Rogers imprisoned and two years later had him killed. History shows that Rogers recited Psalms 51 on his way to be burned at the stake, where he washed his hands in the flame.

Early in the 16th Century Erasmus, a monk turned writer, challenged Christians to get back to the First Century faith. In 1522 Erasmus completed his Greek New Testament, which Martin Luther used for his German Bible. Seven years later Pope Paul IV placed everything Erasmus had ever written on the Index of Forbidden Books. The Roman Catholic Church branded him a heretic. All of his works were forbidden to all Catholic readers. Martin Luther’s Bible and Tyndale’s New Testament were also added to the Forbidden Book List.

Satan, with no power to create, could only pervert as he perverted the true path which became the false or corrupt path of the Word. This corrupt path of God’s Word was developing simultaneously in a school in Alexandria, Egypt. Pantaenus and his followers had begun to mix Greek philosophy with Christianity. Pantaenus’s greatest student was Clement of Alexandria, not to be confused with Clement of Rome who had worked with Paul and became known as the “First Father of the Church.”

In 1853 the British Parliament gave the English Revision Committee permission to revise the 1611 Authorized King James Bible version. They were instructed to make as few changes to the King James Bible as possible, but that is not what happened. Two men named Hort and Westcott, with their unbelief in God’s Word, would ensure that those instructions were not obeyed. It is almost impossible to imagine what was about to happen, but fortunately they left a very visible trail in their own words.

Quotes from their letters show exactly what these men, who were responsible for what would become the new versions of God’s Word, believed and did not believe concerning the Bible. For simplicity here, they both believed the Bible was full of errors. Their revision was not popular at the time, but soon with seminary support, these ideas of philosophy mixed with Christianity would become very popular. Satan had accomplished his goal. The corrupt path of the Word was established so subtly that few even noticed.

Today with only one letter from God, the Holy Bible, there are 40,000 different denominations who claim to believe the Bible. The author discusses some of the major ones and reveals which actually believe and obey the Bible.

Church leaders all over the world stutter and struggle to attempt to explain the Trinity doctrine. The most common explanation today is, “Trinity? You cannot explain it. You just have to believe it.” The author reveals why there has been so much difficulty in those attempts and identifies scripturally and historically the truth of the trinity doctrine in a most thorough way that many have not yet witnessed.

The author reveals in the final chapter the messengers to each Church age. The book of Revelation shows that the Church Ages are both historical and prophetic. Scriptures show that the messenger to this Laodicean Church Age was to come and exactly what he would do. His teachings were just as Paul taught. The Seventh Church Age messenger was so endowed with the Spirit of God that he proved to all that heard him that Jesus Christ is just alive today as when he walked the shores of Galilee. Millions were healed of all kinds of physical and spiritual ailments during and since his ministry. Revelation of the hidden mysteries and the manifested power of God came together in a very special ministry.

The history books are manmade. All of God’s Word is perfect. Only the history that completely agrees with the scriptures is true Bible history. This is that history.

Jesus Christ and the apostles, along with Polycarp, Ignatius, and Hermes, carried the true Word of God deep into the first church age. Yet Satan attempted to infiltrate the true path of the Word with help from unbelievers who were more than willing to do his dirty work. Because of this, the structural religious imprints left by ancient pagan civilization began to take a toll on the religious denominational world in such a subtle manner that it has gone unnoticed.

In Hidden Bible Truths in Plain View, author Windell Gillis explains how since the Bible is the only real and perfect truth, Christian history can only be real and true if it agrees completely with the Bible. This history does! Messengers to the seven church ages, who are revealed here, were able to turn the people back to God in each age, if only for a season.

With Philo having perverted the definition of the Logos, which changed the way people worshipped with respect to the Godhead, and with so much confusion in the religious world—as proven by the forty thousand different denominational groups today—something must happen! And it did! The revelation of Malachi 4 and Revelation 10:7 concerning the mystery of God is unveiled in Hidden Bible Truths in Plain View—to the shock of Christians worldwide.

Windell Gillis resides with his wife, Lawanda, on their Angus cattle farm in Dodge County, Georgia. They have been married for forty-nine years and have three sons and eight grandchildren. Windell was raised in a Christian home but had questions about God’s nature; by studying the direct Word of God in the Bible, Windell was able to have God’s Word become clear to him, changing his life forever.