The United States Constitution and The Bible Conflict or Compromise

Exercise Your “Rights” as a Citizen Christian Pursuing the American Dream 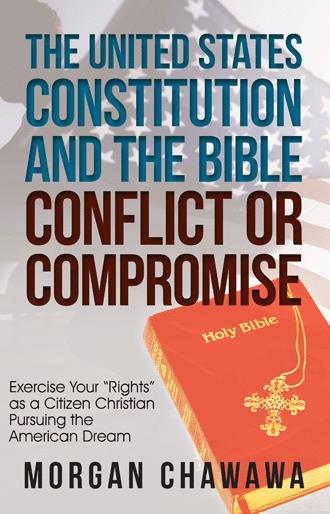 Kingdom of God or The Word demonstrates that Christians are citizens of two realms--the earthy and the spiritual--and they have rights and responsibilities in both spheres. As citizens of heaven (Phil. 3:20), Christians are commanded to be obedient to the Lord Jesus (Exod. 20:1-5). Our Lord’s instruction to “render therefore unto Caesar the things which be Caesar’s and unto God the things which be God’s” (Luke 20:25) means giving ultimate allegiance only to God. It means paying our taxes. It also means much more. The Apostle Paul instructs us that as Christians we have the responsibility to be good citizens of the state “for conscience sake” because God has ordained government to punish and restrict evil-doers and to reward and protect moral behavior (Rom. 13:1-7). Christians are to support the civil government unless the authorities require a believer to support or to do evil in direct contradiction to their ultimate allegiance to their Heavenly Father. Christians also are commanded by Jesus to be the “salt” of the earth and the “light” of the world (Matt. 5:13-16). This involves Citizen Christians in active engagement with the world, preserving as salt and illuminating as light. Thus, the responsibilities of Citizen Christians include not just obedience to the state, but involvement in society.

The Baptist Faith & Message confession of faith affirms this call to involvement with the world when it states that “All Christians are under obligation to seek to make the will of Christ supreme in our own lives and in human society.” The confession also says “In the spirit of Christ, Christians should oppose . . . every form of greed, selfishness, and vice,” as well as “seek to bring industry, government, and society as a whole under the sway of the principles of righteousness, truth, and brotherly love.” This statement clarifies our responsibilities as Christians, and our rights as citizens. When we bring our religious and moral convictions into the public marketplace of ideas and involve ourselves in the political arena, we are standing solidly within the best of our traditions as Americans and as Baptists. Far too often in recent decades we have allowed ourselves to be driven from the arena of debate by false understandings and misleading applications of church-state separation and religious liberty.

According to Kingdom of God, Jesus Christ is the King (Lord) of the Kingdom of God. “On his robe and on his thigh he has this name written: KING OF KINGS AND LORD OF LORDS” (Revelation 19:16). Kingdom of God goes on to say that when you receive Christ into your life as savior and Lord you are “born again.” That is, you are born into the family of God “a chosen people.”As such, you are, right now, a citizen of the Kingdom of God, “a holy nation!” “In reply Jesus declared, ‘I tell you the truth, no one can see the kingdom of God unless he is born again’” (John 3:3).

The Bible says this Kingdom of God is a real Kingdom with privileges for its citizens (a constitution of sort), statues, laws and a kingdom government (a monarchy). And Kingdom of God says this government, led by the return of Christ the King and His true disciples (those who obey Christ), will rule over all the nations on earth for a thousand years. “The kingdom of the world has become the kingdom of our Lord and of his Christ,” (Revelation 11:15). As a follower of Christ, you are expected to learn how to live here on earth in a manner consistent with your royal status and you are expected to obey your King and His teachings. “If you hold to my teaching, you are really my disciples” (John 8:31). “If you love me, you will obey what I command” (John 14:15). “If anyone loves me, he will obey my teaching” (John 14:23). “Remain in me and I will remain in you,” (John 15:4). “If you obey my command, you will remain in my love” (John 15:10). “And this is his command: to believe in the name of his Son, Jesus Christ, and to love one another as he commanded us. Those who obey his commands live in him, and he in them. And this is how we know that he lives in us: We know it by the Spirit he gave us” (1 John 3:23-24). Kingdom of God is (God’s handbook to humanity) that defines reality (principles of truth concerning the ways things really are). The Gospel of Christ was His teaching on 1) how you can be reconciled with God and restored back to the original nature man was created with (salvation) and 2) that the Kingdom of God/Heaven (the government rules Heaven and all of God’s creation including those living n America hence the need to put it first in all our decisions.

This book is a thought-provoking, deeply spiritual treatise containing a mixture of biblical and political research along with personal observations of the author regarding the lives of American citizens and Christians. Are the two identities compatible? Are they mutually exclusive? Can they work together?

MORGAN CHAWAWA is a lecturer at Botswana Open University, educated in the USA and became a Christian as a student at University. He taught the US Constitution at Perimeter College, (formerly DeKalb College), Atlanta Georgia. and was motivated to carry out a comparative study of the US Constitution from a biblical perspective. The social freedoms and political rights at the centre of the US Constitution can also be found in the Bible. In 1994, Dr Chawawa was one of the reviewers of the textbook “Government by The People in 1994’ published by McGraw Hill. He holds a BSc in Urban Government Administration and a Master of Public Administration from Georgia State University, and is an ABD in Political Science at the same University. He received a Doctor of Ministry from Immanuel Theological College, Georgia. He was an Adjunct Professor at Baptist Theological College, South Africa and Rhema College, Zimbabwe.