Even Broken Can Be Beautiful

A Story of Life, Loss, and the Hope of Heaven 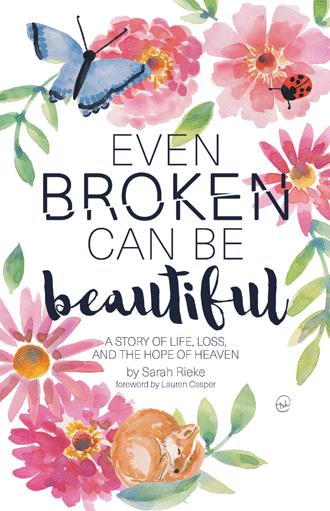 As my life became more and more acquainted with grief, I realized just how much of a conscious choice it was to surrender to the will of God. When life felt easy, it felt easy to surrender to God’s good will because His good will would yield good things. But when faced with the impending death of my baby girl, it became so much harder to see how surrender would yield good, and easier to want to run in the opposite direction.
One night, shortly after Evie’s diagnosis, I was kneeling beside our bathtub, adjusting the faucet so the water would be just the right temperature for Micah’s bath. As I swirled the water in a figure eight motion with my hand, I became fixated on this idea that there was no way in the world God would let my baby girl die. I mentally stomped my foot down, hard, and let God know exactly what I thought of His wretched little plan.
There is no way God! There is no way you are going to make me do this. I can’t. I just can’t and you can’t let it happen! And that is final. No further discussion necessary!
Immediately I began to break down and cry. I was sobbing so hard it became difficult to catch my breath. A reality crashed over me that I just didn’t want to face.
In my mind I saw a distinct crossroads. Both roads lead to the same result: the death of my baby girl. There was nothing I could do and nothing the medical professionals could do that would save her life. It was up to me which road I would take to arrive at that same dismal end.
Would I choose the road that would glorify the Lord? Would I choose the path of willful, albeit agonizing surrender, a path that would give weight to everything I ever said I believed about God and His word? Or would I choose the other path, the one where I rebelled against God in any way I could, turning angry and bitter at this story He wrote for my life and the life of my little girl?
I had a choice, a very distinct choice. Would I surrender to the good will of a good Father, even though it all felt so bad? Or would I go my own way and follow the darkness no matter how far it took me? The choice was mine to make.
While it was always evident from the onset of her diagnosis that Evie’s physical condition would not be healed barring a complete and utter miracle, it was a realization that took me some time to come to grips with. I wrote this in my journal just a few short weeks after her diagnosis:

Painful realization this morning ... one I think I always knew but didn’t want to face head on: Evie isn’t meant to be healed.
Since we heard the news, I have been so vocal about the journey. So many people are being reached for Christ. As [a mentor] said, I have a platform now and people are listening. Women are emailing me and finding comfort in my words. Even [family member’s name] has been challenged to rethink his faith abandonment. I really feel the Lord is using me and wants to see this to the end. (Phil 1:6)
I have prayed, begged really, for healing for my baby. Those prayers somehow seemed hollow compared to the ones for peace and wisdom and direction. I really think God is preparing my heart for goodbye.
I desperately don’t want it, but I think it is inevitable. When I pray for strength to say goodbye I can almost hear an audible voice say, “I will help you,” not, “You won’t have to.” I’m so, so afraid, but I am trusting.

I had been asking for God to use me and give me a place to really shine for Him. He gave one to me, I just didn’t realize how much it would cost. But I have sung, “Take It All,” and, “Take My Life and Let it Be.” Did I really mean it? If so . . . so be it, all for God’s glory.
Channels only, blessed Master, but with all they wondrous pow’r, flowing through us, Thou canst use us, every day, and every hour.

There is something sacred about surrendering our will to the Father even when it hurts. The Lord can be glorified in the place where surrender meets a heart actively breaking, and faith is most decidedly itself when we move forward, tears streaming and soul crushing under the weight of reality, and make the choice to praise the God of our salvation. When we choose to surrender to the will of God no matter how difficult things are, we build a strong and powerful testimony right before the eyes of a world begging to see.
Paul says that when we suffer in this life, we enter into fellowship with the suffering of Christ. We can understand Christ and His sacrifice of love on a different level when we enter into those hard things with eternal eyes, even if we must strain our eyes to see just a faint outline of what that deeper understanding might be. As Paul writes, “For it has been granted to you that for the sake of Christ you should not only believe in him but also suffer for his sake.”

“No human language possesses adequate words to describe what it feels like to watch as life slowly leaves your newborn baby. I have never felt so palpably and sickeningly helpless in my entire life. I was strong like wet tissue paper is strong. The moment felt like a horrible dream . . . except this bad dream was my reality.”

How can a good God let babies die? Does He really have my best in mind? Will He ever heal my broken heart? The Bible tells us that God is good and that everything He does is good. But what about when the pain of this life bristles against that definition of God’s undeniable goodness? It is in those times when the deepest questions of our souls emerge.

After learning that her unborn daughter would not be able to survive outside of the womb, author Sarah Rieke was pressed face-to-face with these difficult questions. Three years later, following the fatal diagnosis for her unborn son, Sarah was once again forced to reconcile God’s goodness against the brokenness of the world.

Even Broken Can Be Beautiful is the story of the author’s own personal journey to find purpose in the most difficult, confusing, heart-breaking moments of life. It is the story of learning to lean hard on the God who can bring good from even the most despairing situations, an honest story of deep pain redeemed by the beauty of the cross of Christ. In this book, you, too, will uncover the sacred truth that because of Christ, even our most deeply broken places can be made beautiful.

Sarah Rieke is a writer, podcaster, and bereaved mother. She has a heart for encouraging women of faith to walk well in the story that God has written especially for them. She also seeks to encourage fellow bereaved mothers as they seek beauty in the midst of their own grief and brokenness. Sarah makes her home in southeastern VA with her husband and three living children. She loves dark chocolate, rewatching her favorite shows, and pants with elastic waistbands. Find out more about her heart, her story, and her passions at sarahrieke.com.