and the reason we baptize 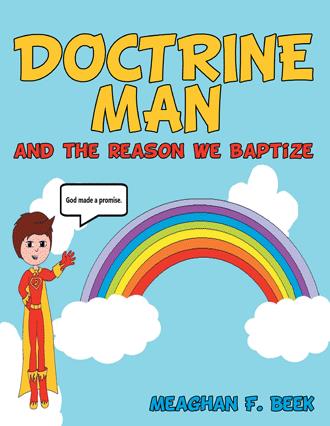 Part One: In the Beginning:

-Have your student repeat the scriptures as a memory verse.

It took God 6 days to create everything: (Turn to Picture Two)

Day 1: He made Heaven and Earth; He separated the Dark from the Light. (Genesis 1:1)

Day 3: He separated the dry land from the sea and He made the plants and the trees. (Genesis 1:9)

On the seventh day God rested and looked at all His creation and He liked what He saw. God then gave Adam dominion (the right to rule) over all things, and even created a woman for Adam called Eve.

Eve was created after Adam. She was made with the use of Adams rib, God gave Eve to Adam in Genesis 2:23: ‘And Adam said, this is now bone of my bones, and flesh of my flesh: she shall be called Woman, because she was taken out of Man’.

Eve was the first person to sin in the Garden of Eden. A serpent tempted her and Eve gave into that temptation and disobeyed God. Adam was the second, he disobeyed God’s only rule in the garden. Genesis 3:1-3:6. (Turn to Picture Three)

In the Garden of Eden where Adam and Eve lived, God said to Adam the one thing he was not to do, was not to eat the fruit of the Tree of Knowledge of good and evil, and if Adam did eat the fruit, he would die.

Eve was created after Adam she was made with the use of Adams spare rib, God gave Eve to Adam Genesis 2:23 KJV says ‘And Adam said, this is now bone of my bones, and flesh of my flesh: she shall be called Woman, because she was taken out of Man’. Eve was the first person to sin; in the Garden of Eden a serpent tempted Eve and Eve gave into that temptation and disobeyed God. (Turn to picture four)

Genesis 3:1-3:6. KJV “Now the serpent was more subtle than any beast of the field which the LORD God had made. And he said unto the woman, Yea, hath God said, Ye shall not eat of every tree of the garden? And the woman said unto the serpent, We may eat of the fruit of the trees of the garden: But of the fruit of the tree which is in the midst of the garden, God hath said, Ye shall not eat of it, neither shall ye touch it, lest ye die. And the serpent said unto the woman, Ye shall not surely die: For God doth know that in the day ye eat thereof, then your eyes shall be opened, and ye shall be as gods, knowing good and evil. And when the woman saw that the tree was good for food, and that it was pleasant to the eyes, and a tree to be desired to make one wise, she took of the fruit thereof, and did eat, and gave also unto her husband with her; and he did eat.”

When Eve gave Adam the fruit, it was not until Adam sinned, and ate of the fruit that Man had disobeyed What God had told them not to do. Both eyes were opened and Adam and Eve covered themselves with fig leaves which are very large leaves so they were well covered. When they heard the voice of God, they tried to hide but you cannot hide from God.

They disobeyed God and so they were punished. (relate to the person in whom you are giving this study to, discuss, how for every action there is a reaction, and how when we do something wrong there have consequences. For example, if we something wrong we get grounded or some sort of task, that is what happened to Adam and Eve). When Adam and Eve were in the garden, they did not have to hunt, grow things or do anything, for God supplied everything, but man was cursed and made to till (farm) the ground and hunt. Eve was cursed and told she would go through pain and give birth too many children; she was given the task of populating the earth.

Adam and Eve had to make clothes to cover up the sin of their nakedness, first they used fig leaves, because they are very large, then they had to kill animals. Killing animals provided coverings and food (Blood was shed to cover up sin).

Doctrine Man is a superhero who is dedicated to teaching the Word of God. He can travel back in time to witness the history of the Bible. In this Bible study, Doctrine Man moves through history, explaining the reason we baptize. This Bible study includes a teacher’s manual, a fun quiz (question and answer) section, a Doctrine Man picture chart, and a coloring in section with a completion certificate.

Meaghan, has taken a different approach to teaching children about God. The fun filled adventure’s of Doctrine Man teach in a relatable fashion, and keeps their attention.