The Fabric of our Faith

Through the Bible in One Year Devotional 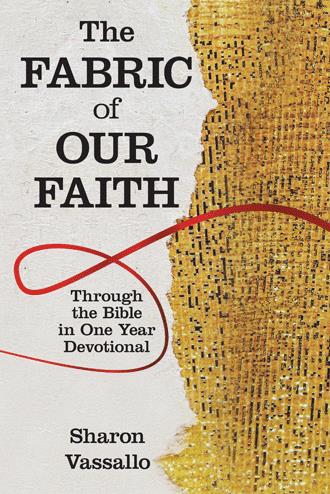 Genesis 1:26,17—Then God said, "Let us make man in our image, in our likeness, and let them rule over the fish of the sea and the birds of the air, over the livestock, over all the earth, and over all the creatures that move along the ground." So God created man in His own image, in the image of God He created him; male and female He created them.

In this beautiful account of God's creative powers, we see His ultimate sovereignty and limitless power. The perfection of the earth is just a reflection of our Creator's perfection and beauty. We are in awe of the vast array of magnificent vistas around the globe. In fact, we find beauty everywhere we look. How awesome is our God! If that is not enough evidence of God's worthiness of our undying praise and worship, God made man in His own image. Now that does not mean that we look like God, or that we can imagine God as a man. God is Spirit, and is triune in nature, consisting of Father, Son and Spirit. He cannot look like man, except in His appearance to men, such as when Jesus appeared as the Angel of God in the Old Testament and when He was born to the virgin Mary and dwelled among men for 33 years. What it means is that we are created with the capacity to think and reason, to love, to have compassion and understanding and to desire relationship with the Almighty God. We have a spirit that longs for relationship with Him. When the scripture states that God "created" man three times, this is a poetic emphasis on the fact that we are created beings, with a purpose, designed specifically by God. Every human being has dignity in that he/she was created in God's image. That is why murder, abortion, and abuse toward one another is so objectionable. We are to treat others with dignity and respect because they were created by God.

Then was the craftsman at His side.

I was filled with delight day after day,

rejoicing always in His presence,

rejoicing in His whole world and delighting in mankind.

The ultimate apex of God's creation was the creation of man. The whole heavens rejoiced in this part of creation. The angels sang praise as the Wisdom of God culminated in this final act of creation. As human beings we are extremely valued by the heavenly beings and by our Creator! We were created for purpose and have great worth. Let us treat one another with the love that Jesus commanded us to have.

Luke 1:31—"You will be with child and give birth to a son, and you are to give him the name Jesus. He will be great and will be called the Son of the Most High" ..."How will this be," Mary asked the angel, ” since I am a virgin?" The angel answered, "The Holy Spirit will come upon you, and the power of the Most High will overshadow you. So the holy one to be born will be called the Son of God."

For those who worry themselves about the virgin birth being something impossible, just think of the creation of the entire universe and of mankind. Nothing is impossible with God! Why did the birth have to be a virgin birth? Because Jesus had to be pure and holy with no sin in His life, even in His conception. This was to be the perfect sacrifice for the sins of mankind. Why couldn't He have simply descended from heaven and lived among us for a while? Because we needed a sacrifice, a priest from one of our own kind, to make the appropriate sacrifice. Jesus, the Lamb of God, had to be fully God and fully man for His sacrifice to be acceptable for the sins of mankind. We can rejoice in the birth of our Savior, who came to the earth to dwell among men and to teach us the ways of God. He made the ultimate sacrifice for our sins so that anyone who believes in Him can have eternal life.

The Fabric of our Faith, is a daily devotional intended to lead readers through the Bible at their own pace, or within a year if they so desire. Readers are encouraged to read all scriptures suggested for the day. She has picked certain scriptures for a devotional reading. The author’s intent is to show the continuity between the Old Testament and the New Testament. Jesus is the common thread that is woven through the entire fabric of the Holy Scriptures, with the promise of hope for all people.

Sharon Vassallo lives in Wesley Chapel, Florida with her husband Charles. She worked as a Mental Health Nurse for the greater part of her career, and retired to live on a sailboat with her husband. She and Charles spent ten years sailing and doing missionary work with Crossing Cultures, International. She currently leads a growth group in her church. Her heart is teaching Biblical truth and helping believers to grow in their faith and commitment. She also enjoys quilting and painting in her spare time.