Who’s at Your Table? 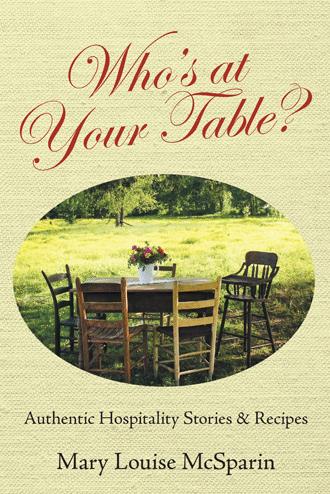 My childhood memories are somewhat different than these. I remember the meals not being varied much, as groceries were not abundant. Our main meals would most always contain fried potatoes, white beans, and cornbread. A lot of time there was no meat. Large bags of puffed rice cereal (an item I very much disliked then and now), as well as hominy, were plentiful, along with breakfast foods of oats and rice. My mother did things to stretch the food farther; like adding bread to the ground beef when making hamburgers and mixing powdered milk and water and then adding regular milk to it so that it tasted better. At the time, I didn’t know her reason for making those changes or, in fact, that these foods could be served any other way. She simply wanted to feed us all, given her very tight budget, and these were some ways she came up with to make that happen. She had a difficult time of providing for her five children, but even though food wasn’t in abundance, the memories of eating around our table are.

I’m thankful for government programs that helped put food on our table, like the one where a big truck would show up at this certain spot beside a local church in Rosiclare, Illinois, the little river town community in which we lived. My mother would tell us children “we’re going to meet the truck!” She rolled the little red wagon out from under the front porch, and we hopped in. It was a treat to take the ride across town, speeding along (in our opinion) in our small red wagon. I remember standing at the truck as they handed out peanut butter and cheese, along with other things, but my memory fails me as to what those were.

Not long before her passing, my mother shared a story with me about her inability to put food on her table. This story takes place over fifty years ago. We had no groceries. There was absolutely nothing to cook. She and my father (deceased in 1992) had separated, and she had three preschoolers to feed. I was the oldest, my brother Mike was 18 months younger than me, and my brother Larry was 13 months younger than him. While talking with her landlord in front of the old apartment building one day, about how she couldn’t pay the rent, a lady strolled by with two heaping bags of groceries. The bags were so full they ran over, leaving a package of hot dogs lying on the sidewalk. My mother’s first reaction was to pick them up and shout after the lady “you dropped your hot dogs!” However, the landlord told her to pick them up, take them upstairs and “feed those babies.” The picture of three little children sitting around the table, eating only hot dogs, brings tears; tears of joy for God’s provision, and tears of sadness for the hard life my mother experienced in those days. How delicious those hot dogs must have tasted! I can’t imagine not being able to feed my children at mealtime. The thought of not knowing if there would be a next meal is not on my radar as I have been abundantly blessed with provision for them. This story will always stick in my mind though, and serve as a reminder to my heart of just how difficult it was for my mother. Sadly this is a common story even today, as many face this same situation. Now here is the opportunity for us all; to help provide food for the hungry, or ask them to come to your table. Yes indeed, the table holds many memories. Are you making memories at your table?


It was Christmas time, around the year 1960. My mother and father were sitting around a fancy table, surrounded by my dad’s co-workers from the Fuller Brush Company. The men were dressed up; some with dress hats and jackets. As my mother looked around the room at the abundance displayed, she decided to do something very brave. Being at this dinner party was uncomfortable for mom, because her family was struggling financially. She stood to her feet, picked up a gentleman’s hat nearby, and announced to the whole group that her children would not have anything for Christmas that year. She asked if they would be so kind as to put some money in the hat for her “babies.” The hat was passed from person to person, and back to my mother. To her surprise, it contained a sufficient amount to get her “babies” their Christmas (mostly clothes, but a few toys also). I am thankful for God’s provision and that He used a fancy Christmas table moment to do it.

One cannot help but to be drawn in as they read the personal, heartwarming stories in Who’s at Your Table? A loving venue of hospitality and meals, this book highlights an activity that the author feels few people participate in today: real, authentic, community with those around us. Who’s at Your Table? shows how lasting memories and deep relationships can happen in the setting of table time with family, neighbors and friends. Recipes complement the stories, and help give insight to each tale itself. The author includes a section of her own unforgettable dishes in the last pages that will keep the reader returning to them again and again.

The shy, smart girl who loved books and grew up in rural Hardin County, Illinois, never imagined she would one day be an author. Since that time, Mary McSparin has raised a family, and completed her college degree while working a full time job. She considers retirement a blessing as it allows much time to spend with her sweet grandchildren and pursue her gift of writing. Mary writes about the things she loves; her saving relationship with Jesus, her love of cooking and family, and her God-given desire to use meals to show hospitality and meet the needs of others. Mary is active in her local church, teaching Bible study on Sundays and looking for opportunities in which she and her husband Tom can share life with people they meet.