A Study in the Book of Judges 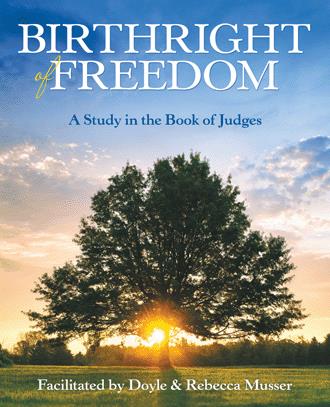 “All authority in Heaven and on earth has been given to

Me. Therefore, go and make disciples of all nations,

and of the Holy Spirit, and teaching them to obey everything

I have commanded you. And surely I am with you always,

Jesus’s closing words to the disciples in the above passage launched a revolution to establish the Kingdom of God on earth. With the cross as the mechanism of sacrifice, the sinless, wounded body and blood of Jesus-Messiah completely fulfilled the just requirement of the Law of Most High God so that the love of Father-God might be requited in “whoever believes in Him. . . (Jesus, Son of God) (John 3:16b). ” This was the overthrow of the usurper “who came to steal, to kill and to destroy, (John 10:10, NKJV). ”The authority Christ gained has been delegated to every blood-bought believer for the advance of His Kingdom.

But “we are not just soldiers of the cross, we are heirs to the throne . . . made to be vessels of His glory and vehicles of His light.” 1Jon and Jolene Hamill have written powerfully in their book, Crown & Throne, “In place of the darkness and bondage of the world systems Jesus commissions transformation of individuals and nations by a spiritual revolution that empowers freedom.”2 The apostle Paul said it earlier in Galatians 5:1a (NIV), “It is for freedom Christ has set us free.”

Two thousand years later, how do we fare? The reviews are mixed. China, one of the largest, most populous nations on the earth, continues to experience exponential Kingdom growth despite political oppression and persecution since the 1930’s. World missions experts forecast reaching the goal of every people group having a viable fellowship of believers in Jesus by 2020.

There are global prayer networks. Outbreaks of revival, accompanied by miraculous signs and wonders, are reported in various places on earth. At the same time, there are also increases in the works of darkness Jesus spoke about in Matthew 24: war, famine, persecution, hatred, betrayal, an increase of wickedness in the earth, and love-less-ness. Terrorist groups of men and women who are sold out to an agenda of violence, hatred, and death spawned from the master deceiver are at work in almost every nation. The fury of hell rages against Jerusalem, the seat of God’s throne in the earth, and against the Christ-followers who also bear the authority of that throne. Truly, the darkness is getting darker but, the Light is growing brighter.

Jesus’s promise, “Surely I am with you to the very end of the age (Matthew 28:20, NIV),” is both comforting and empowering. That He is with us brings confidence in the declaration of God that HE will accomplish His purposes in the earth. With Christ’s presence comes the release of His mind, His strategy, and His authority to carry it out. Fresh revelation about God’s commission for His people “to displace the evil principalities on the mountains (of influence in cultures) and occupy them with Kingdom citizens,”3 is emancipating a generation to pursue God-given birthrights with passion and excellence. A greater understanding of the Courts of Heaven is producing a paradigm shift in the Body of Christ which allows the plans of God to be activated in the earth realm. We pray, “Your Kingdom come, Your will be done on earth as it is in heaven (Matthew 6:10, NIV),” and Christ’s presence with us enables the Father’s answer. “The crown and throne movement God is now birthing into this world is foremost a progression from slavery to freedom,”4 and our mandate comes from Jesus’s own.

Luke 4:14-21 gives the account of the launch of Jesus’s public ministry. After His baptism and the testing in the wilderness, “Jesus returned to Galilee in the power of the Spirit (verse 14a, NIV).” One Sabbath He went to the synagogue, which was His custom, where He stood to read the Scripture for the day. He read from Isaiah 60:1-2, then sat back down. Imagine the pregnant silence as people fixed their eyes on Him. What would He say about what had been read? Verse 21 tells us, ‘He began by saying to them, “Today this Scripture is fulfilled in your hearing.”’ His reading revealed five purposes for the Spirit’s anointing: good news, release for captives, recovery of sight for the blind, emancipation of the down-trodden, and proclamation of the Lord’s favor. This was, and is, both amazing and wonderful! The good news is most simply spoken in John 3:16. God loves us so much He willingly gave His Son to redeem us and re-establish the way to intimacy with Him. More than that, this good news returns to the believer the access to birthright and inheritance. Freedom is the focus of the next three purposes: freedom from our captivity/imprisonment, freedom from our blindness, and freedom from oppression. The apostle Paul wrote in Galatians 5:1, “It is for freedom that Christ has set us free (NIV).” As we are set free and learn to live in the way of Christ, we experience the fifth purpose, the year of the Lord’s favor.

In this study we will explore seven specific areas that hold us back from the freedom God intends. After each lesson we will invite the Holy Spirit to apply the Word to our lives. Then, we will follow Kingdom protocol for dealing with any issues that affect and infect that area of our lives. May God bless each of you as you study, pray, and respond to this invitation to freedom.

No matter your circumstance, everyone is born with a birthright and an inheritance. God has promised this inheritance to each and every one of us, although many of us may not know how to access our birthright—and some of us may not even know what we will inherit.

Birthright of Freedom is an in-depth Bible study centered on the Old Testament book of Judges. It focuses on seven major oppressors of Israel during that period, explaining their origins and the generational sins that typified their relationship with Israel. The study looks at the importance of covenant, covenant blessings, and consequences of covenant violations. There is opportunity to discover contemporary manifestations of those same generational curses, using the biblical model to deal with generational sin. Alongside each curse, authors Doyle & Rebecca Musser look at the covenant blessings God has given us through the redemptive gifts and the redeemer himself, Jesus.

As Jesus proclaimed, we are all heirs to the throne of the kingdom of God, and he has given us the freedom to claim our place alongside him in this coming kingdom. By identifying the specific areas that hold us back from the freedom God intends, you too can apply the Word to your life and begin following kingdom protocol.

Doyle & Rebecca Musser are lifelong followers of Jesus, and they have a passion to see people set free from the generational bondage that so often holds them back from their birthrights. Both received formal education at a small Christian liberal arts college, and Doyle also has a master’s degree in psychology. While Doyle & Rebecca pursued traditional work in the social sciences and education, thirty years ago they began learning about spiritual healing and deliverance. Today they stand as a powerful testimony of personal deliverance, and they have also founded a small ministry, Harbor Shalom.