Women, Why Are You Weeping? 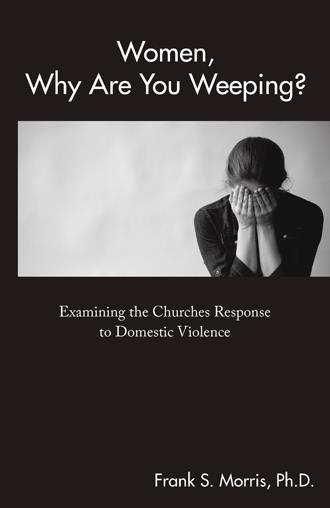 The influences of religious beliefs profoundly impact a woman’s decisions on whether to stay or remain in an abusive relationship. The reality is that correctly understood, religious beliefs can save lives; conversely they can contribute to the loss of life as well…

That some communities of faith continue to misuse scripture to keep women locked in abusive relations is evident by the results of the Alsdurfs’ survey of conservative Protestant clergy. Twenty-seven percent of the pastors surveyed felt that if a woman submits to her husband, God will eventually honor her and either the abuse will stop or God will give her the strength to endure it. According to the Alsdurfs, “To take such a stance is to acknowledge that the principle of wifely submission preempts other considerations, such as that of a woman’s safety. This was evident by the fact that pastors who stressed wifely submission were also opposed to victims using certain:
protective legal and medical resources and were inclined to discount women’s reports of violence.” …Pastors in the Alsdurfs’ survey were asked to rate just how intense marital violence would have to be to justify a woman’s leaving. One-third of the respondents felt that the abuse would have to be life threatening, and almost one-fifth believed that no amount of abuse would justify a woman’s leaving. (Wilson 2006, 204-205)

The faith community unwittingly lends support to the offender by the misappropriation of Scripture whose interpretation grants authority, power and control in a marriage relationship to the man.

Deceptive interpretations of and misuse of scriptures play a role in the subordination of women. Scores of women feel pressured by their faith communities and cultural values to remain in abusive relationships. Sadly, these women are frequently subjected to counsel that seems to suggest that they are in someway responsible for the abuse they are incurring. The advice these Christian women in crisis are given ranges from staying in their situation and being submissive to their husband to just praying harder. Although their lives are in danger, many feel that they would be betraying their religious beliefs if they left their marriages.

Those who distort Scripture claim this passage as normative behavior—that the husband is commanded to rule over the wife. Instead, this ruling is part of the curse of sin that is to be overcome in Christ. In Christ, the relationship between husbands and wives is restored to one of partnership. (Swagman 2002, 145, 146)

in marriage. In her book Responding to Domestic Violence, Beth

Swagman notes, “God does not demand that victims remain

in a covenant broken by abuse, but scripture does condemn

faith with marriage covenants but God’s love and grace are

piously committed against Christian women in our churches

with regularity and ignorance is no longer a viable excuse. There

ministries grappling with untold indignation. To the chagrin

of the Church, she not only fails to address it but, she purports

the problem as non-existent within the body of Christ. Given

the increased attention violence against women is receiving from

unredeemed entities such as the medical community, social

professions; including domestic violence and humanitarian

sports organizations (MLB, NBA, NHL and NFL), how can the

redeemed do any less?

It is our responsibility to explore ways to ask this question

“Woman, why are you weeping?” Once we have discovered the

cause of her sorrows, we must then act to eliminate them. We

inflicted by the callous and passively indifferent in the Church,

which has failed to acknowledge her predicament or intervene on

her behalf. Got it? Why is she crying? She says, “Because they

have taken away my Lord,” she adds, “and I do not know where

they have laid Him.” Christian women to this day are resilient in

their quest for Christ, although some would argue these women

are foolish to subject themselves to further insult and unscriptural

abuses within the church, that sadly and tragically mirror the

world’s view of women. They remain and persevere because, like

Peter, they know that the Lord has the words of life, where else,

fled our churches; rather they are persisting and resisting violence

in the name of Jesus.

Christian husbands are cursing, choking, punching, beating, kicking, and in some instances, using weapons to assault their wives. Women, Why Are You Weeping? describes how trust is broken and collusive alliances are formed whenever the church chooses to not get involved in family violence issues. When juxtaposed to Mary Magdalene’s traumatic discovery at the tomb that caused her to cry—“they have taken away my Lord, and I do not know where they have laid him”—this writing offers insight into ways Christ is poorly embodied when he is portrayed as complicitous in our unjust acts. Women, Why Are You Weeping? is an appropriate inquiry into the depth of disappointments our fellow heirs of the grace of life undergo. This question only appears twice in Scripture. In both instances, it is posed by divine beings looking into the affairs of mankind. Policy and practical change will occur when the church views the violence as a concern of all God’s people, particularly clergy. If the unredeemed can be there to listen to and comfort victims and have invested the money and time needed to give the victim/survivors the encouragement and hope they so desperately seek, how can the redeemed do less?

Frank S. Morris, is an ordained Baptist Minister who advocates ending violence against women. He has trained with the New Jersey Coalition of Battered Women, and A Call to Men, and earned post-graduate degrees in Biblical Counseling and a Doctorate in Philosophy. He is the recipient of Women Rising Inc., and Harambe Social Services Inc., New Jersey, “2016 Above and Beyond,” and “2017 UJIMA,” awards respectively. He promotes and encourages pastoral and congregational awareness of domestic violence, generating support for its victims. Frank is an advocate • counselor • educator • victim/survivor committed to ending violence against women.