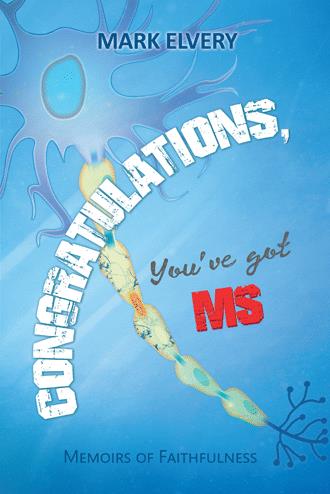 After a couple of years of abnormal feelings and unexplained behaviors from my body, I found myself sitting before a medical specialist. Between us, a large, spacious, solid wood desk. The year – 1993. After only a few minutes of listening and jotting the occasional note, he looked up. Wearily, he shuffled the papers on which he had scrawled those rough annotations, lent back in his antique leather office chair while resting his elbows on the armrests and clasped his hands on an overly distinguished stomach. Then peering over the desk, without further ado he pronounced those words which I would carry with me from that moment on, ‘Congratulations, you've got MS!’
We surveyed one another in silence for a moment, with neither of us prepared to open further dialogue. For me, it was a relief to hear why my body had been acting in such an erratic and unpredictable manner and as for the doctor, I once more received his normal bedside manner as I had first experienced years before.
I simply said, ‘Thank You’ as I rose to my feet. Without rising from the chair, he lent forward to reach out and dismiss me from his presence with a noncommittal wave of his hand. With that, my time was up and while he half grasped my outstretched hand with a faraway attention as he began to think about his next patient. I walked out, never to return.
When I got home, I immediately sourced another neurologist and booked an appointment. On repeating my history and the symptoms which I had observed over recent days, he confirmed the diagnosis and offered some advice at no extra charge. His simple suggestion was that I should withdraw from my dental studies, since I would inevitably never work in the dental field.
What did not add up to me, was the fact that I felt God had led me into this degree in the first place. A five–year degree of which I had completed three years. Yet here I was, coming to what seemed like an abrupt dead end.
This led to the inevitable question of what would I do with this information? Jumping off a bridge was not really an option. Becoming a recluse held only marginally more appeal. One thing I did know however - giving up was not an acceptable option for me. I reminded myself that if God had placed me in this course, He would not suddenly change His mind!
In that instant, the decision was made in my mind. ‘No matter how hard it gets, whatever is needed – persevere and never give up!’ An answer that had its origin long before.
Born in 1973, I had become fully committed to Christ at the age of 15, at which time I recognized that my life needed to be cleaned up and cleaned out. After inviting God to do 'whatever it takes' in 1989, the next 15 years, resulted in that life being torn apart allowing God to rebuild it in the way that He wanted. The onset of Multiple Sclerosis came 18 months later and was just the beginning. A confirmed diagnosis now had not given until three and a half years later with those words, “Congratulations, you’ve got MS!”
Meanwhile there had been relational breakdown in my family and then following that diagnosis, the downward spiral continued. With attempted suicide it was not until an escape to the Bush (wilderness), that personal restoration began when the reality of making Christ not just my savior but Lord with daily submission as well, became real to me. With life once more in alignment, marriage, academic fulfilment and children preceded full family restoration. Ministry despite disability followed, leaving one final block/brick missing in my life. And so, began the pursuit of healing.

When a doctor told Mark Elvery, “Congratulations, you’ve got MS,” he went ahead and did what anyone else would have done: He got a second opinion.
Confirming the diagnosis, a second doctor added something extra: “Withdraw from dental studies immediately, since no one with multiple sclerosis can work in the dental field in the long-term.”
But Mark felt that God had led him to study dentistry in the first place. After some thought, he decided giving up was not an acceptable option as God had placed him in this course. And, He would not suddenly change His mind!
In that instant, the decision was made. No matter how hard it got, and whatever was needed, he would not give up.
Now, whether you want to say that God sent the MS to Mark, or that his diagnosis was simply the result of a broken world, the Lord used this disease to help pull his life apart so He could rebuild it.
Join the author as he shares an inspiring journey of God restoring a broken life. A journey that reveals the true nature of salvation and why everyone should give their lives to our Lord and Savior, Jesus Christ.

Mark Elvery is a qualified dentist who specialized in dental anthropology and lives with his wife and two sons in Manly West, Queensland, Australia. Unable to use his legs, arms or hands any longer, he still enjoys music, writing, and reading.