Shelter from the Storm

A Divine Plan for Overcoming Strife and Division 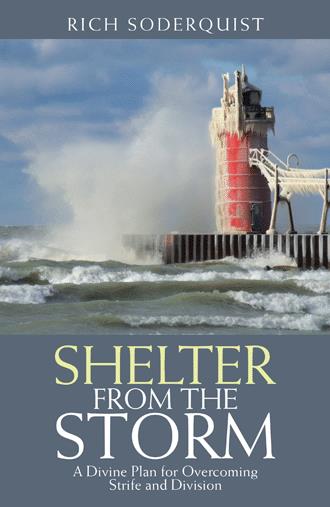 People are hurting, and the world needs love. In every nation in every corner of the earth, in every business, every church, and every home, someone is dealing with the effects of strife and division. Unfortunately, few escape the grasp of its harm. Stress and its effects have been the silent health killer in our society for many years now—ask any doctor. Marital discord is a leading cause cited for divorce. Church boards and businesses often struggle with difficult personality conflicts. Nations fight nations, and Congress can’t agree on much other than a pay raise. This book is an easy read with an emphasis on eliminating strife and division in our lives. The Word of God reveals many encouraging details that, when applied correctly, help eliminate these difficulties. God did not intend for you to struggle through life, constantly dealing with division. Thank you for joining me as we journey through a simple four-point process to define, explore, eliminate, and control strife and divisions in our lives. CHAPTER 1 Define It What Are Strife and Division? Bob and Mary had been married for more than twenty years and knew all the right buttons to push in an argument. This one was no different. Bob came home from work early; he was out of gas and needed cash quick, but they found none. They spoke harsh words, and soon the house fell silent to a couple divided. How many times have you been in a similar situation and thought, Why, Lord, did this even happen? It was over nothing. A young college student could not get along with one of her new professors; for one, she could not understand his foreign dialect, and it was hard to understand his lectures. Then there was the constant belittling of the American way of life. Unless something changed quickly, she feared failure. This is a real example of two cultures thrown together with differing opinions—maybe right or maybe wrong, but divided none the less. The church was everything Robbin had wanted in a worship experience since she had been a little girl. There was only one problem: the music—and it was too loud. Robbin had been raised on traditional hymns, and she so loved the older songs. Nana had already expressed her opinion about the loud music. Michelle, Robbin’s thirteen year- old daughter, loved it—and for the first time in her life, she was responding to the Holy Spirit in a worship service. But could Robbin ever get used to this noise? Her worst thought was to leave and do it quickly. How could she ever tell the pastor? The offense his brother had caused him years ago haunted him as he looked over his now dead brother’s casket. Forgiveness and reconciliation face-to-face were no longer options because he was gone forever. Words were left unspoken for too long. If he could only tell his brother one last time that he was sorry for the silly things said in anger that now seemed so pointless. The volleyball game was not that important—what was eating Carol was that her child had ridden the pine all year long while the rich kids played on. Could she ever forgive this coach for the negative effects not participating would have on her child? Bobbie was not surprised when he arrived home from school and his mom and dad were fighting—Mom was bleeding, and Dad was black and blue and passed out on the kitchen floor. Bob had seen it all before; he never even slowed down as he grabbed a snack and went straight to his room to watch old black-and-white Laurel and Hardy films. The TV was his only friend, and he wondered if he would ever escape. Bob’s parents had had a case-a-day beer habit since he was born; part of him wondered why he should even try differing from them. Sex before marriage never bothered Sharon; after all, someone had abused her since childhood and used her at every turn. This time was different—it was her third abortion, and she was wondering about how this would affect her later in life. Could she ever forgive herself or anyone else? Seeing yourself and others in these examples is easy; we’ve all experienced strife and division in our lives, and they leave no one out. The hard part is what to do about it and what we can change to make life better. The book you’re holding will give you four easy steps to handle division: • Defining it. (Understanding the situation.) • Exploring it. (Discovering what God’s Word has to say on the subject.) • Eliminating it. (Admitting, committing, and fully releasing our needs to God’s care.) • Controlling our emotions surrounding it. (Resisting negative thought patterns.) I base the upcoming chapters on what the Bible has to say about the subject of strife and division. Before we go too far, let’s define what strife and division are and are not. Two distinct definitions from Webster’s Dictionary (1828) explain it perfectly: Division: Disunion; discord; variance; difference. There was a division among the people. —John 7:43 Strife: Contention in anger or enmity; contest; struggle for victory; quarrel or war. I and my people were at great strife with the children of Ammon. —Judges 12:2 Here are several top definitions of division from a 1913 edition of Webster’s: The act or process of dividing anything into parts, or the state of being so divided; separation. That which divides or keeps apart; a partition. Disunion; difference in opinion or feeling; discord; variance; alienation. Divided opinions or interests, separation, disagreement, disunity, being divided, etc. No matter how you define it, the results are usually negative. The definition of division is something I studied for a very long time. To divide in mathematics is to split into equal parts or groups. Mathematics made me think that each time division takes place, you end up with less. Exceptions exist, but most division equals less of something.

Division is rampant, and eliminating strife and division in our lives can be an everyday challenge. So how do we weather the storms of strife in our lives, and where can we seek the guidance we need to find peace and harmony?

Shelter from the Storm explores a simple four-step process to define, explore, eliminate, and control our emotions when it comes to facing division and strife. Author Rich Soderquist takes you on a journey that explores what the Word of God has to say about division and creating a life of peace, love, and forgiveness. And using this simple process, you can better understand your situation, discover what God wants you to do, commit yourself to following God’s plan, and then control your thoughts and behaviors in the right way.

By applying and following God’s principles—as well as by controlling our emotions and thoughts—we can turn the strife and division in our lives into peace, love, and harmony. Faith and self-control are part of this divine plan, because God did not intend for you to struggle through life constantly dealing with division.

Rich Soderquist is an author, photographer, videographer and web developer. He holds an MBA in business management and several professional certifications. Rich works in a variety of forums including Christian business and financial leadership, electronics education, project management and continuous improvement principles. Active in the Church for over thirty years he strives to bring education, training and unity where there is division. Rich loves everything fishing and enjoys being in the outdoors as often as possible. Rich lives in South Haven, Michigan with his wife and two daughters.