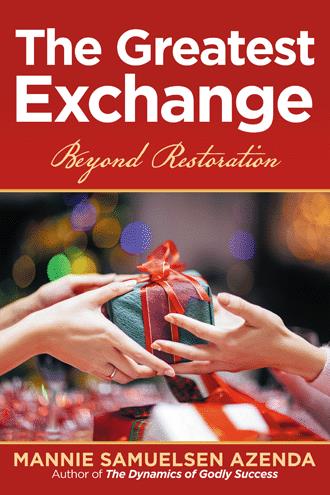 Exchange is a very important word. It is also a very important human activity. The idea of exchange involves parting with something and getting something different in return. Individuals, business partners, colleagues, groups and even sovereign nations exchange things such as ideas, real estate, and other types of valuable assets. In fact, we exchange things much more frequently than one may realize. Of all the exchanges that have ever taken place in history, and the ones that will ever take place in the future, it is that exchange which resulted in the redemption of humanity that I call The Greatest Exchange. In 2 Corinthians 8:9, Apostle Paul compellingly captures the essence of this monumental exchange this way: “For you know the grace of our Lord Jesus Christ, that though He was rich, yet for your sakes He became poor, that you through His poverty might become rich.” This is perhaps one of the most intriguing passages regarding what happened at Calvary about two thousand years ago. On its surface, it appears as if Apostle Paul is referring to financial and material riches. However, as I spent many hours studying and meditating on the passage, the Holy Spirit opened my eyes to what I hadn’t seen before: he revealed to me that, truly, the Lord Jesus exchanged his multifaceted wealth with our soul-crushing poverty, so that we would become rich. My spirit began to overflow with the following: First, the Lord Jesus did not give his life only for our financial and material well-being. With the guidance of the Holy Spirit, I have sought to demonstrate in the pages of this book that the scriptures have fully precluded any ambiguity that Christ’s death has completely and irrevocably addressed all the unfortunate consequences of the fall of man. Secondly, Christ did not die several times for each of the consequences of the fall of man. He died only once. His death was the only such event that resulted in erasing all of the unfortunate consequences of the fall. The Holy Spirit further revealed to me that to fully appreciate the essence of Christ’s work of redemption, we need to look at it holistically. Therefore, this book sets out to narrate the implications of God’s impeccable work that has redeemed man from the consequences of his fall. What led me to conclude that the death of Christ is in fact The Greatest Exchange, are the following four reasons: In the exchange that resulted in the redemption of humanity, Jesus gave away everything including his life. Our Lord Jesus gave his life, he suffered and died the most painful and cruel death. The exchange that happened at Calvary was unparalleled in that there has never been any other exchange so sufficient for every need and situation regarding man. It was the exchange that was necessary to take away all the attendant devastation that accompanied the fall of man. It was the exchange that was required to bring man back to his original state in which God created him to be. This fact was enunciated in Jesus’ last words on the Cross when he declared that “it is finished.” The implication of this three-letter phrase is that every word of prophecy about his mission on earth had been accomplished. Jesus also knew that he had completed everything that was required to perfect man’s redemption and his consequent reconciliation with God. We know that there was nothing desirable about the state of man after the fall. And so, when the Lord declared with his dying breathe on the Cross that it is finished, in the realm of the spirit the process of exchanging our deplorable state with his perfection had been completed.

The Greatest Exchange is written by a man who understands God’s love for humanity and the tremendous sacrifice of Jesus Christ for us and the benefits we are blessed with as a result. The book is well written, well organized, easy to read and understand, for Christians, Non-Christians and New Christians alike. The prayers at the end of each Chapter, are so appropriate they bear repeating or confessing during one’s daily prayer time. Excellent Book! —Ed Huculak, Springs Church, Calgary The Greatest Exchange takes readers on a journey that helps us to more clearly understand the implications of Christ’s death on the cross as far as the human condition is concerned. Using both insightful biblical interpretation and pertinent real world examples, the text shows us in detail the progression of God’s plan for the Redemption of humanity following the Fall of Man in the Garden of Eden. It poses very intriguing questions in ways previously not considered. And the book also leaves one with a renewed feeling of joy and hope as far as the God’s real intentions toward mankind. —Anne Carson, Founder and President of Scribe Assist

Mannie is a second generation minister of the gospel of Jesus Christ. He was the senior pastor at Foursquare Gospel Church Ugboroke, Warri Nigeria. Mannie is the founder and senior pastor at Royal Gateway Church, Calgary. He loves the Word which he communicates with such infectious passion and conviction. His teachings are well-blended with refreshingly rich illustrations, love and truth. Mannie is widely known for his love for family and the institution of marriage. His burning desire is to see Royal Gateway become Calgary’s destination of choice for strengthening marriages.