The Message of Galatians for Survivors of Cults and Spiritual Abuse

by Lawrence A. Pile 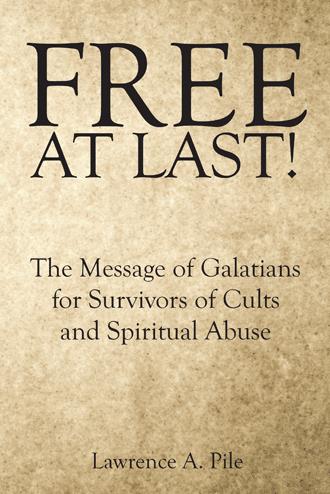 Galatians 3:3:
“Are you so foolish? Having begun by the Spirit, are you now being perfected by the flesh?”
The NIV translation reads, in the second question of the verse, “…After beginning with the Spirit, are you now trying to attain your goal by human effort?” The false teachers seem to have been saying something like this: “Yes, faith in Christ is necessary for salvation. But you still need to obey the Law of Moses. Faith in Christ gets you through the gates of the kingdom of God, but obedience to the Law gets you into the actual presence of God. Faith gets you justified, but works get you sanctified — and the more good works and Law-keeping you have, the farther you progress into the Kingdom.”
This is no different from what contemporary cult leaders and many abusive pastors teach. In cults the leaders and pastors tend to view themselves as God’s scorekeepers or God’s referees — they are the ones who let you know what you have to do, when and how often you need to do it, and when or whether you’ve done enough of it.
An episode of the TV show House that aired in November 2007 showed Dr. House using a scoring system allegedly to determine which two of four contenders for positions on his diagnostic team he would ultimately choose. However, the contenders did not know what the standards were or what suggestions they might make would either gain or lose them points. Dr. House graded them on a totally subjective basis that the contenders could not possibly know in advance, adding or subtracting points seemingly by whim. Many cult survivors can relate to this practice occurring inside their groups — being graded on a scale that they simply never get to see.
In 1971, I was privileged to travel for two weeks in Eastern Europe with the Director and two other men from a missions agency called Missionary Enterprises to visit Christians, provide financial assistance, and assess the needs behind the Iron Curtain. On one leg of the trip, we traveled by train from Bucharest, Romania, to Kishinev, Moldavian Soviet Socialist Republic, U.S.S.R.
Upon arriving at the border between Romania and the Soviet Union, we learned there would be a delay while workmen switched out (literally!) the wheels of every train car to fit the wider tracks in use in the U.S.S.R. It seems that Joseph Stalin had ordered that all rail-roads in the Soviet Union be constructed with wide-gauge tracks in-stead of the medium-gauge in use throughout all the countries to the west (and in North America). Stalin calculated that the wider gauge rails would impede any invading army as the U.S.S.R. was the only country to employ the wider gauge rails. However, when Hitler eventually turned on his ally, he simply ordered that new tracks be laid within the wider tracks!
This was our unexpected situation when our train arrived at the Soviet border. In order for the train to proceed on into the Soviet Union, the wheels had to be changed. This meant that workmen had to loosen the bolts holding the trucks to the cars, then the cars had to be raised about 6 feet so the trucks could be rolled out from under the cars. Then the wide-gauge trucks had to be rolled under the cars, the cars lowered, and the new trucks attached securely. A new engine even had to be brought in and coupled to the train in order for the journey to finally continue. Obviously, this all took a good bit of time, during which customs officers had all the time they needed to examine our luggage, our carry-on bags, and finally our clothing looking for anything forbidden. All contraband was taken away, and we never saw it again.
I tell this story simply to illustrate what the Galatian believers were being told they needed to do in order to progress in the kingdom of God. Having made it through the “border crossing” on the narrow gauge of faith alone, they were now being told that they needed the wide-gauge wheels of faith plus works to go any farther in their faith journey. Thus Paul asked the Galatians, “Having begun by the Spirit, are you now being perfected by the flesh?” (3:3) Were the original wheels of faith no longer adequate for travel inside the kingdom of God? Are wider ones actually necessary?

The book is a straightforward commentary on the New Testament book of Galatians, proceeding mostly verse by verse. I make frequent application to the ways contemporary cult leaders and teachers and spiritually abusive pastors misinterpret and misapply the teachings of the scriptures.

Lawrence A. Pile was a staff member and Director of Cult Education and Research for Wellspring Retreat and Resource Center initially of Albany, Ohio, and later of Athens, Ohio, from May 1988 to 2005. He is currently retired, and conducts workshops for Wellspring as needed on a voluntary basis. His duties have included preparing and conducting workshops on a wide variety of spiritual and practical issues and topics designed to help people who have suffered abuse as members of high-control, destructive organizations and relationships, including spiritually abusive churches. The type of abuse suffered was always emotional and spiritual, often physical, sexual, and financial. The goal of the workshops is to help victims/survivors come to an understanding of what happened to them, how it happened to them, and how to move on with their lives. Larry has written for Wellspring’s newsletter and journal (now no longer published), as well as other periodicals. He has written an on-line book about Great Commission Association of Churches (Marching to Zion – accessible through www.gcmwarning.com).