If I Could Create a Tree Today

How Old Will It Be Tomorrow? 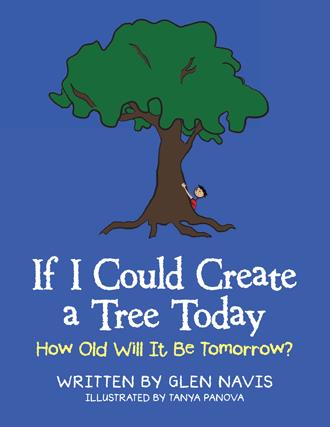 If I Could Create a Tree Today

(How Old Will it Be Tomorrow?)

I had a chance the other day to hear once again

The age of this old mighty earth proclaimed by learned men

The depth of mountain canyons the height of cinder cone”

Then, I mused, what does this prove? Can Creation not belong?

Has science proved beyond a doubt the Bible must be wrong?

But, what if for, just one prayer, I had God’s power to create

A simple tree with branches wide and height of sixty-eight

And, next day, a scientist, on a quest its age to know

Cut down the tree to count the rings - just what would that show?

Would he declare “the tree is one day old” - as I, its creator, - knew

Or count the rings and state beyond a doubt - “the tree is fifty-two.”

And what if, to carry on this thought, when God Creation designed

Had created a sky looking just one day old, would we ever call it sublime?

PEORIA, Ariz. – Author Glen Navis discusses the creation of the universe and “Creationism vs. Darwinism” in his new children’s book featuring illustrations titled “If I Could Create a Tree Today: How Old Will It Be Tomorrow?” (published by WestBow Press).

Navis believes the biblical account of creation is correct and that approximately 6,000 years have passed since the creation of the earth. Navis also believes scientists are correct when they say there is evidence the earth and universe appear to be billions of years old. He presents the question, “How can I hold both of these views simultaneously?” and explains that he believes that when God created the universe, he created it “immediately full-grown” as being billions of years old. While the book is intended for children, the meaning behind it will also challenge adults and the way they think about these topics.

The book intends to challenge readers to think about the beginning of the world in a different way. “There is no need for Christians to continue to fight to disprove scientific theories about the age of the earth,” Navis says. “And no need for Christians to be embarrassed about their Christian beliefs in the Creation story. I am simply offering a different possibility. I think science and the Bible are both right. ”

An excerpt from the back cover of the book reads:

And to emphasize that this “instantly full-grown mature” method of creation was His chosen method, in Genesis 2:22 God created Eve “right before our eyes”. It says He caused Adam to go into a deep sleep and then created Eve from Adam’s rib – instantly.
When Adam awoke there was Eve – a full-grown, mature woman.
So this little book is trying to illustrate this idea with a simple childlike story: Imagine a tree created full-grown one day and then cut down the next day by a scientist trying to investigate how old it “really” is. Using science’s most sophisticated technology (counting the rings) the scientist determines the tree is “positively” 52 years old.

Glen Navis is a retired CPA turned musician. He lives in Wisconsin with his wife LaVerne and her dog Shirley.