The Two Faces of the Church…Get Right With God 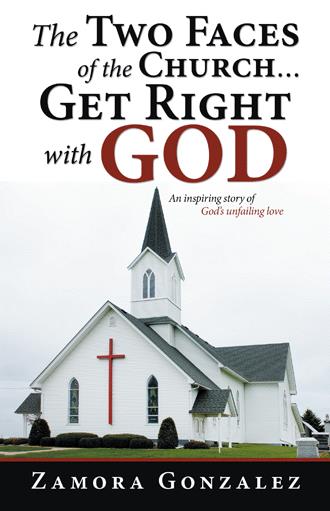 I have written this book because someone has to tell the truth. To live righteous means to have a moral compass that reflects God. I will share first-hand accounts of the church member’s indifferent and the heartfelt pain I endured. There were times that I thought I would leave the church and go back into the world. But because of my love for God I held on. I realize there is still hope for the church and I plan to do something about it. I apologize to the readers if the content of this book offends you but ‘truth be told.’ “For we must all appear before the judgment seat, so that each of us may receive what is due us for the things done while in the body, whether good or bad” (2 Cor).

I honestly can tell you that it’s not my intent to judge anyone, it’s not my job, and I leave that up to God.

Judgments are very difficult to stray from when making distinctions about certain people, places, and things. For the point I am trying to convey in this book judgment may appear a bit too harsh but only if the reader sees him/herself requiring a mirror into their behaviors and attitudes and can appreciate some “constructive criticism.” Author and Psychiatrist Scott Peck explains, “We will see that it is both impossible and itself evil to totally refrain from making moral judgments. …The fact of the matter is that we cannot lead decent lives without making judgments in general and moral judgments in particular.”

I would rather have my own Christian family judge me now then to be judged by God on the Day of Judgment because it would be too late to make amends.

In recent years, I have noticed that some of the church members have made a shifted from holiness to carnality. I have observe a number of those once faith-believing people drifting away from the doctrines of the Bible. They are living semi-godly life if there’s such a thing and are listening to the dictates of their own conscience. Pastor and theologian R.C. Sproul had this to say about the matter of the conscience that alarmed me. “… the conscience is capable of change. [When] the hardness of the heart [has] set in the conscience, the conscience becomes callous.” Religiosity and the culture have come into the church and has created confusion in the minds of the people, and they have become unsure of who to serve, God or the world. “…If your conscience merely echoes the standards of the society in which you live, and your conscience is not informed by the word of God…then you better not let your conscience be your guide because your conscience can guide you to hell.”

It was my personal experiences that prompted me to write this book. It disturb me to think that church people were going to Hades. I don’t want my Christian brothers and sisters to spend eternity in Hades because of their callous behavior. I thought that if I wrote my story, we can all learn how the conscience if not supported by Scripture and God’s truth can guide us into a secular way of thinking that will only lead us into the inferno fire. The Apostle Paul in his Epistle’s to the churches understood this type of behavior all too well, “I fear that there may be discord, jealousy, fits of rage, selfish ambition, slander, gossip, arrogance and disorder.” I also have something to say about the 21st Century church and their callous behavior. It’s unacceptable to be treated with such callous and indifference by church members.

I will walk you through tears of disappointments, and brokenness I experienced throughout the years in the church as a new convert as well as a veteran Christian. Through my own experiences, you will understand the different characteristics and behaviors that I was confronted with in the church. T.D. Jakes admonishes us to be free of everything that is toxic in us through the redeeming Blood of the Son of God, “The world doesn’t care about what you say but what you do. The church should be known for love and compassion. Some of us have been in a spiritual prison. God is in the business of redeeming, restoring, and renewing. Our God is a liberator.”

God is looking for the church without spot or wrinkle. We need to make some changes in our attitudes and behaviors and be transformed to reflect His love.

The truth as I witnessed it throughout the years is that the church had begun to lose its vision and purpose in the midst of a changing ideology from the polluted minds of the secular culture.

I know that church people are multifaceted in their personalities. Some members have one foot in the church and one in the world. Pastor John Hagee believes that this type of callous behavior is only the beginning of the one-government order to deceive the people of the church, “…That the immorality infiltrating the church today is to oppose the doctrines of the Bible inclusively Jesus Christ. The Church of Christ must be careful because they are the target of this mass-movement to create a new heathen nation...”

God gave the believer free will, and we are not forced to do anything we don’t want. I believe that there is still hope for the church in this century. Robert Sayers Sheffey spoke about the church and the path it was taking in the nineteen century, “[God] calls them unto Himself, but if they will not follow Him, then they have to go their own way. Every time we give up part of our faith to try to fit in the ways of the world, we lose it forever. …And, God is driven from our schools, and our government, and our homes then God’s people can look back and know that our religion was not taken from us it was given up. Handed over bit by bit until there was nothing left.” The Christian believer will either serve God in every sense of the Biblical word or choose to serve the world

If I had not experienced what I did in church how else will the leadership of the church know what some of their members are experiencing. I am not the first, but I hope to put an end to it. What I have to say will make a difference. My hope is that when you read this book, you also will be made whole and join me in making a difference for the sake of the new generation...

Don’t lose hope all is not lost. Let us believe in the saving grace of our Savior who will never leave us nor forsake us. When God calls us, He does not walk away and leave us. You and I were saved not by our own volition but by God’s pursuit to save a wretch like you and me. Take my word for it I am still here and so will you when it’s all said and done. Together we will hold on and not give up. But let us continue to pray for one another. I love you, my brother, I love you my sister and know that God loves you more. We are here because God has extended our lives.

Frustrated and angry with members in the church and discouraged by their behavior? Ever felt betrayed and treated like a stranger by the church family? Struggling to stay in the church and fearful about the future without God in it? In, The Two Faces of the Church…Get Right With God, Zamora shares with transparency about the church shortcomings and how to stay connected to God and worthy of Him.

Zamora shares her struggles to remain faithful to God as she noticed a shift in the church from holiness to carnality and the drifting away from Bible doctrines and the life-changing moment that brought her inner peace. Through her own experience, vignettes, and Biblical tips, she guides the way to healing and repentance that will draw you nearer to God – as you discover,

You can stand up and do what you were called to do for the church.

You will not allow the problems of this world and the ungodly behaviors of the church members to affect you anymore.

You will encounter many trials and tribulations but will remember that God remains faithful and true to His word. He will not walk away and leave you.

You were not saved by your own volition but by God’s pursuit to save you, and you are still here because God has extended your life for His purpose.

If you who have been emotionally injured and experienced grave disappointments in the church and have questioned your walk with God; this book is for you.

Zamora Gonzalez has been attending church for more than 30 years and it was her love for the people in the faith and unfaith that she wrote her story. Zamora Gonzalez attained a Bachelor of Science degree from Sacred Heart University and a Master of Social Work degree from Southern Connecticut State University. She worked for the Department of Mental Health and Addiction Services for twenty years. She is passionate about people’s salvation and deliverance. She is the mother of three children and lives in Connecticut.