The Gifts in the Struggle 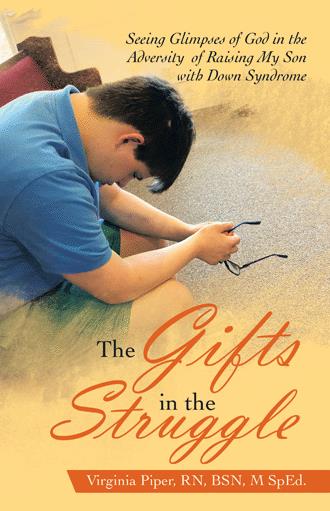 “You’ll need to come into the office to get the results of your tests”, the faceless woman on the other end of the line said. These were the words I heard that bleak December day that would end up changing my life forever. Little did I know then just how much.

I was 44 years old and pregnant. I had always heard that statically the chances of having a baby with Down syndrome dramatically increased with age. My doctors referred to me as someone with “advanced maternal age”. I didn’t care much for the label. Regardless, I didn’t really dwell on the fact that having a baby with Down syndrome would actually happen or if it did, would it really be all that different from having a typical baby? There has always been some-thing on the inside of me gravitating toward those that society deems as weaker. It did make me pause and wonder.

Thinking about the possibility of a baby with a disability didn’t seem out of the ordinary. It actually brought up memories of my childhood and young adulthood. I had been surrounded by family and friends with disabilities my entire life. My mom taught school with students who had intellectual disabilities. She would come home entertaining us with funny and touching stories of her students. As a young bride my grandmother had her right leg amputated due to osteomyelitis. That was long before the days of antibiotics. I never knew her without crutches or later on in her life a wheelchair. I can still see her in my mind’s eye rushing around her kitchen making dinner. Nothing much slowed her down. My dad describes his memories of her going up stairs two at a time on crutches! He has always been amazed at her strength and determination. My grandmother would walk with crutches at least two blocks from her house to the bus stop. She would somehow get up the steps of the bus un-aided except with her crutches. She would then ride downtown, shop all day and then meet my grandfather at his office when they would ride home together in the car. My best friend in junior high school had brittle bone disease and wore braces on her legs to walk. A wheelchair was for long distances. At home she either rode a tricycle or crawled from room to room. In my early thirties I had dated a man with paraplegia. Disabilities were just a part of life.

The phone call I received, which had prompted all of these memories, forced me to reflect upon that week. Things were moving so quickly. The hours had seemed to fade into one another creating blurry lines between the days. What seemed like just minutes ago, I had gone through some routine prenatal testing. The triple screen results could indicate either Down syndrome or Spina bifida depending on whether the value was elevated or decreased. My test result revealed a value possibly indicating Down syndrome. I was also aware that there are often false positives with those tests so part of me had dismissed the value of even getting the results. But then, surprisingly, an appointment had been made with a high-risk OB who had recommended an amniocentesis. The suggestion of a needle being put through my abdomen made my mouth dry and caused me to feel a little dizzy and weak in the knees. This began to feel a little too real. I felt like I needed to just slow down and catch my breath. Was it really necessary? After hearing the convincing arguments and for the sake of some elusive diagnosis I reluctantly agreed. The days that followed while waiting for the test results dragged on like watching the clock on a Friday afternoon in high school. I was ready to hear the proverbial dismissal bell ring.

Forty-four and pregnant coupled with divorce proceedings. Things couldn’t get more complicated….until I received a prenatal diagnosis of Down syndrome. How was I to take this journey alone? A single mom, a fulltime job, an eight-year-old at home, and a new baby with a disability. I knew so little and felt so unqualified. Yet, each step of the way brought me closer to seeing glimpses of God as He worked in the everyday.

USAF Med Tech to Registered Nurse to Special Education. Advocacy in the disability community began with her son Andrew and grew when her son George was born with Down syndrome. In 2018 Virginia began a ministry to women struggling to understand who they are in Christ. Ashes to Beauty is based on Isaiah 61:3.