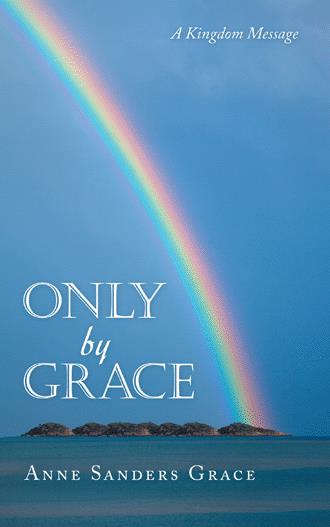 Chapter 3: Rainbow of Grace
Several years ago I stood in my kitchen watching the colors of a rainbow appear on the white cabinet. I realized it came from a sun-catcher in the powder room window. It made me happy, so I danced around the room, and a song burst from my mouth:
“I’m dancing in the rainbow of the Lord,
Dancing in the rainbow of the Lord.
He pours out His grace when I look on His face,
I’m dancing in the rainbow of the Lord.”
Fun, frivolous, and free to enjoy God’s love and grace!
In Genesis 6:8 we read, “Noah found favor [grace] in the eyes of the LORD.” Noah and his family were the only righteous people found upon the earth at that time! Before God flooded the earth He told Noah, “I will establish My covenant with you; and you shall enter the ark” (Genesis 6:18).
One of the reasons I chose a rainbow for the cover of this book is because of the promise God gave to Noah after the flood. “I set My bow in the cloud, and it shall be for a sign of a covenant between Me and the earth. I will remember My covenant which is between Me and you and every living creature of all flesh” (Genesis 9:13-15).
New York Times Journalist David Brooks wrote in a recent column in our local newspaper, The Island Packet: “A covenant exists between people who understand they are part of one another. It involves a vow to serve the relationship that is sealed by love.” The dictionary defines covenant as “a binding agreement made by two or more individuals.” (11) God gave the rainbow to Noah as a covenant of grace and a promise. Years later, God gave His beloved Son Jesus as a Covenant to all who would believe in and follow Him.
When we were children we were told there is a pot of gold at the end of the rainbow! I suppose it is an Irish tale because a leprechaun is usually pictured sitting on the pot of gold. Anyway, we childishly dreamed of finding the gold wherever the rainbow touched the ground following a rainstorm.
God’s Rainbow
Today the purpose of God’s rainbow has become distorted. For some reason the LGBT community has adopted the rainbow as a symbol for their liberated causes. The lesbian-gay lifestyle goes against the natural order of God’s creation of male and female.
In the beginning “God created man in His own image…male and female He created them” (Genesis 1:27). God put the man to sleep and took one rib from his side, forming a mate compatible for him, enclosing her with the same kind of flesh as his. God created humans both masculine and feminine within, although their body parts are different. The fall of man in the Garden of Eden caused a distortion to arise where men began to prefer men instead of women. Satan was behind all of this, perverting God’s plan for men and women to multiply and replenish the earth with children, who would mature and do likewise. When two of the same sex cohabitate, it is physically impossible for them to reproduce, thus wiping out a whole new generation of humans.
God created us the way we are, not necessarily the way we perceive ourselves. He loves His creation! When we get to Heaven, we will no longer be sexual beings, but spiritual beings, more like the angels.
Choices
God wishes that all people would love Him in return. But some choose to walk in a different direction—away from God’s Presence. God gives us a choice. We are not puppets. He asks that we believe in Him and receive the promise of salvation through Jesus, who came to shed His blood and die on a cross in our place.
God loves the people who choose to become attracted to ones of their same sex. He will always love them. However, according to God’s Word, they will not inherit the Kingdom if they choose to remain in that lifestyle. In the book of Leviticus (18:22) God warned: “You shall not lie with a man as one does with a woman. It is an abomination” [loathing or odious or degrading habit or act]. (12) The apostle Paul wrote to the people of Corinth, “Do you not know that the unrighteous will not inherit the kingdom of God? Do not be deceived. Neither the sexually immoral, nor idolaters, nor adulterers, nor male prostitutes, nor homosexuals, nor thieves, nor covetous, nor drunkards, nor revilers, nor extortioners will inherit the kingdom of God” (I Corinthians 6:9-10). I realize this list includes more than the LGBT. However, God is serious about what offends Him. If anyone is included here, consider how much God loves us to warn us to change our ways while we still have time.
We must understand that God is holy, and His Kingdom consists of righteousness, peace and joy in the Holy Spirit. Those who choose to be in right-standing with God, who are in harmony with Him and fellow believers, and who take delight in joyfully doing God’s will are free to enter His Kingdom.

Down through the ages, songs have expressed the feelings of people forever. We have the same hopes and dreams, fears, and longings. Only God can meet our needs by His grace, so we must rely upon Him.
In this Only by Grace, author Anne Sanders Grace has chosen to highlight five songs that express God’s love and grace: “Amazing Grace,” “’Twas Grace,” “Rainbow of Grace,” “Marvelous Grace,” and “Only by Grace.” Some are familiar hymns, and some are new ones God gave to her. It is her desire that as you read this book or sing these songs, you will come to realize what a great, amazing, marvelous, loving God we serve—a God who wants to have a relationship with each of us.
God is the instigator and the provider of love and grace. But first, we must believe Him and receive His Son Jesus’s forgiveness and salvation. And we can only do this by His grace!

Anne Sanders Grace is a writer, and she has written inspirational articles, devotionals, and books. Her books include Grace upon Grace (2000) and three devotionals: The ABCs of Grace, Drippings of the Honeycomb, and Gleanings of Grace. A former religion columnist for the Bluffton Packet, Anne participates in Aglow International, is a member of the Hilton Head Island Writers’ Network, and attends the Christian Renewal Church on Hilton Head Island. She is also a former elementary school teacher and has four grown children and nine grandchildren.