The Keys of Noah 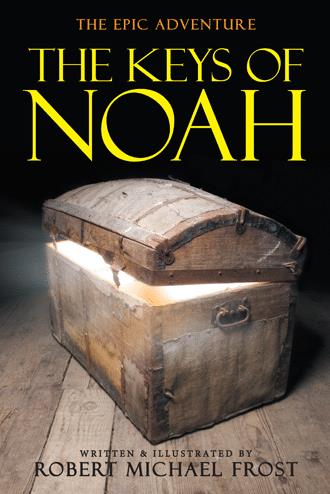 On Board the Battered Ark

The massive wooden Ark creaked and moaned as it rode through the rough, rising waters of the storm outside. The sound of the pelting rain was almost deafening inside the structure. It came down harder and seemed like it would never end. Then there was the lightning. Since the large boat was the highest structure above the water, it was hit frequently, each time startling the occupants inside. Over the constant noise of the storm, the travelers could hear the occasional cries of animals in the bowels of the floating sanctuary.

Despite the deafening rain pelting the outside of the massive structure, Noah preferred it up on the top level of the Ark. He had constructed a small area for himself near the roof rafters, a small place that was special to him. It was his personal place of refuge and contemplation. It was also the place where he could be alone, to talk to God and pray for his family and their safety. The other reason he liked this place was that there was a window. It was closed most of the time by a heavy wooden cover, but he enjoyed the fresh, damp air that made its way past it. He so looked forward to the day he would again see the sun shining down through it.

Noah was praying, on his knees. He was thanking God for His goodness to his family and for sparing their lives in the flood. Noah finished his prayers and tried to stand. An instantaneous flash of lightning and clap of thunder shook him. At the same time, a massive wave hit the side of the Ark, knocking him off balance. To stabilize himself, he grabbed for a nearby polished, metal handle. It protruded from a tall, shiny metal box that was built into the structural columns of the Ark. Noah looked at it briefly and then looked away, shaking his head. The metal box had been a thing of contention while they were constructing the Ark. One of Noah's sons was a brilliant alchemist and metallurgist. He had built a strongbox out of combined metals—or "alloys," as he called them—and he also had invented a complicated locking mechanism. Noah had not wanted this strongbox, nor what it contained, in the Ark. He'd felt that God would supply all their needs, and he was not sure that God approved of its presence within the Ark or their future reliance on its contents.

Over the past few hundred years before the flood, Noah had amassed great wealth. Noah's sons had convinced him that they should bring the family wealth and valued possessions with them. His sons had argued that they at least could be used in the first temple they would surely build once they started their new life on the other side. The large metal strongbox had proved quite handy at times during the Ark's construction. Certain nasty and ungodly people, who had continually ridiculed Noah and his family during the building of the Ark, had wanted to steal all his tools to prevent Noah from completing his divine calling. Good tools were very hard to find and time-consuming to remake. Noah had kept the tools in the strongbox at night. No one was able to open it except the person who held the key. This key was made from a special gold from a faraway mysterious land. The thick metal sheets that made up the sides, top, and bottom of the strongbox were over half an inch thick. The metal alloy was indestructible, and the edges were riveted together and the corners reinforced with the same extraordinary metal.

Noah could hear a commotion down in the lower decks of the ship. He looked down over the rail and saw his son making his way up the steps toward him. He was bringing some tea, steaming in a large earthenware cup. "What is happening down below?" Noah asked, slowly but firmly, as he tenderly greeted his son.

"Oh, it is nothing, Father. The large spider monkey we call Ben-Gally has escaped once more. He is a master of evasion. His name means mischievous one," Shem replied excitedly and with a hint of admiration. "Here, I brought you your evening hot drink."

Noah accepted the drink. It was his favorite tea, with a little honey. "He is well named, that mischievous one." Noah hesitated as he carefully took a sip from his steaming cup. Then he said thoughtfully, "I know of this monkey." Another clap of thunder sounded in the distance. "He is not in the animal tally, you know. I believe he is a stowaway and has no purpose nor place on this vessel. Have you not noticed that all the other animals are quiet and peaceful, as if they understand that they are here for a special purpose? Each one of them was sent here for this." Noah slowly waved his free hand in the air. "They were all sent here by God in their selected pairs. This monkey, he is different in his ways. I think trouble follows this creature, or maybe it leads him." Noah looked over the railing, down into the ship's dark interior. Then he looked back at Shem and said, "We need to keep a close eye on this one. We must find a way to keep him out of trouble, for he does not belong here." Noah pointed at the large steel box, which also did not belong, and gave his son a big smile and a corresponding wink. Noah reached over and handed his son a dried sweet fig as he affectionately patted his shoulder.

"See, Father, another good reason to have the alloy box on board," Shem said as he smiled back. "You haven't felt the key today, have you?"

Noah shook his head and walked over to the covered window. He pushed the cover open and propped it up with a wooden arm. The rain was intense, and they were getting splashed. It was refreshing, though. Fastened to the bottom of the windowsill, on a narrow ledge, was a small, lead-lined silver box. Noah opened it up and reached inside. He pulled out the golden key and felt its effects waft over his being. He then playfully tossed it to his son. Shem walked over to him and placed it back in his father's hand. "This is your key, and this is your strongbox. It is my gift to you," he said softly and affectionately.

Noah stepped forward and embraced his dear son while holding the shiny golden key in his right hand. They had not noticed the slight movement of something creeping stealthily in the shadows. There was another flash of lightning, this time much closer. The light pierced through the open window and glistened off the wet, polished golden key as Noah placed it on the ledge. Without warning, the large spider monkey shot forward, jumped down, hit the floor, and leaped up past Noah, landing on the windowsill. The key that seconds earlier had been in Noah's hand was now gone. Before Noah or his son could speak, Ben-Gally was gone into the darkness, out on the Ark's roof in the driving rain.

The huge boat groaned when it was hit with another massive rogue wave as the storm raged on. Then another blinding lightning strike hit, but this one was instantaneous and right on top of them. Noah and his son were knocked back by the sheer intensity of the thunderclap. They got up and looked at each other, partially stunned, as the smell of ozone enveloped the upper deck. "I believe that is the end of our Ben-Gally," Noah stated. He stepped up onto a wooden chair and looked out onto the Ark's outer roof.

Another flash of lightning revealed the golden key lying only a few feet from the edge of the roof. The way the Ark was pitching in the storm, Noah knew that it would not be there long. Just then another huge wave hit the Ark broadside and rocked it hard. Noah braced himself against the windowsill as the ship pitched to starboard. The wave broke hard over the side and even made its way halfway up and across the roof section. The water flowed down off the top and back into the churning seas. With the next flash of lightning, Noah could see that the golden key was no longer there. It had been swept off the roof and into the churning, murky water below.

FOR CENTURIES, it has been told that the Holy Ark of Noah rests hidden high on the magnificence of Mount Ararat. Unknowingly within it, a five thousand year old mystery awaits to be discovered, a secret which throughout time has only been realized by a chosen few. Through dreams and prophecies, a geologist becomes entwined in the oldest and greatest mystery of all time, plunging him into a series of amazing adventures.

The Keys of Noah follows Justis Burwell on his perilous quest towards the near impossible task that is innocently bestowed upon him. He becomes aware that in ancient times, Noah possessed two keys: one made from a unique special gold and the other a thing of wonder! As Justis wades deeper into the lake of fascination and intrigue, he comes to the realization that there is possibly something on the Ark that wasn’t supposed to be there.

Will it be Justis’s destiny to be the one who solves the intricate age-old puzzle that has eluded everyone else for millennia—or will it be the one who seeks to destroy him who prevails and fulfills the Hope of Shem? Will divine providence allow Noah’s ancient secret of the keys to come to light in today’s world, and does the phantom secret within the inner sanctum of the Ark have a secret of its own?

Robert Michael Frost earned his bachelor degree in geological sciences from the University of Saskatchewan. Robert worked as a professional geologist in western Canada in mineral and petroleum exploration. His wife, Roxanne, a published author, home schooled their four children, who all successfully earned professional degrees in law or medicine. Watching the story unfold while writing it is Robert’s delight and passion. His goal is to have readers feel that they are standing in the story alongside the characters. Robert and Roxanne presently live in Regina, Saskatchewan, Canada. Robert enjoys fishing, gold panning, kayaking, sculpting, and travelling. Please connect with Robert at www.robertmichaelfrost.com.