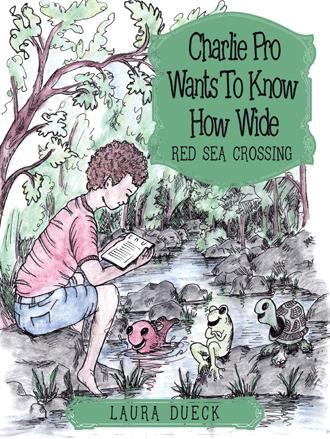 Can we help Charlie figure it out?
Do you know what his questions are all about?
Perhaps if he knew how wide each moving row
He might realize what he is really wanting to know.

But there is more he needs to know…
Like, how fast do people walk?
Do they walk as fast as a grouse?
Or as fast as a scampering mouse?
And how much space do folks need when walking fast,
so, they would not bump into someone
carrying glass?

Perhaps if I told a story from a time and place far away,
and of a night quite dark and gray,
He could figure out for himself
how wide such rows could be.
He would probably end up feeling
like a tiny little flea.

And, while feeling like that tiny little flea,
he would see
how much God cares for him
even when things look rather grim.

He’d see how wide a way
God makes for His children each day.
That His way is wide enough
when things around us get really rough.
With such hope on his mind
he could leave his fears far behind.
And would know that he was not alone
if big problems did come, in a crowd or at home.

So here is the story. Now let me begin.
Open your eyes wide so you don’t miss a thing
as I give this history a little spin.

There once were many people in a land across the sea.
Some say two million people in that extended family.
For years they suffered hardship and so frightened they would be,
Till one day the wicked ruler told them all to leave.
They packed in quite a hurry, with no time to really grieve.
Hugs and tears and gifts they were many;
Neighbor to neighbor, such goodbyes were plenty.

Hushed in the nighttime air -- the multitudes grew.
They all took their places before the morning dew.
Six hundred thousand armed slave-men
standing hand to hand;
Guarding the people as they began the move
out of that land.

Family by family.
Clan by clan.
A new day had come.
Would their slavery be done?

They left that land walking, at first it was slow.
Side by side and row by row.
They were trusting that none of their plans would unravel…
There was swishing of skirts and feet crunching on gravel.
Children were quiet as they hurried along,
away from the danger and all that was wrong.

Could anything go wrong
in that orderly-leaving throng?
Like,...

So, you are eyeing this book!
Are you ready to have a look?
Its pages came from a file
about the Red Sea crossing, not the river Nile.

Its about falling and calling,
about fears and tears.
About a way that is wide enough
when things around you get oh so tough.

So, curl up in a quiet little nook
with this Charlie Pro book,
or find a caring friend
to read it to you to the end.

The author/illustrator has a college level writing course from the Institute of Children’s Literature, in West Redding, CT. to her credit. Her writings, drawings, oil paintings and murals have found a place in churches, homes, businesses and at weddings. Three of her paintings have been given a special spot in the Jake Epp Public Library in Steinbach MB, Canada, where she worked for a time.

Some other things that have made her life rich and meaningful include her years of teaching Sunday School. She also often sat in on classes for the teachers in the private Christian school where her husband was on the board. Together with her husband, she raised their three sons. Each of them in turn brought a lovely woman into the family. “And then came the joy of grandchildren!” she says.

Hers has been a life-time of loving God and His Word. She approaches the re-telling of the miracle that happened at the Red Sea, from a very unique perspective. An approach that can be traced back to the influence of her story-telling mother and her poetic father. Also her ten older siblings. It is her desire that children understand the vastness of what God can do. She adds that she was a child once, surrounded by big problems and a bigger God! A much bigger God!