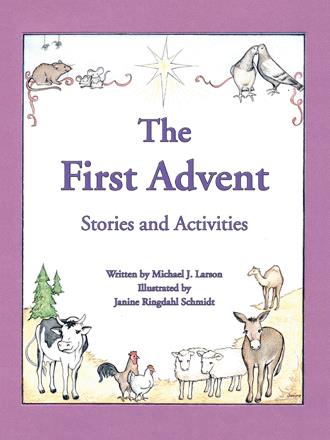 The old stable stood on the edge of Bethlehem. It was built against a wall of rock. The mouth of a cave opened in the back of the stable and the cave offered an overflow space for the stable's livestock.

It was dusk and the animals were quiet. Sleep would soon be over taking many of them. However, Roger Rat and his pals were just waking up and preparing to search out a snack of grain.

Suddenly the darkened stable was filled with a bright light. In the center of the light stood a huge figure. Over eight feet tall and wearing a scarlet robe the figure smiled with kind eyes.

"Attention animals of the stable. I am Andrew the angel. I have come from Heaven with important news."

The stable animals stared wide-eyed at the enormous figure.

Andrew continued, "In twenty-five days God's own son will be born in this stable. He will be named Jesus and is destined to become the Savior of the world. His mother's name is Mary and His earthly father is named Joseph."

Together the animals of the stable murmured, "Baby Jesus, God's own son! Wow!"

"Use the next days wisely to prepare the stable for the arrival of Heaven's royalty, Baby Jesus."

The cow, whose name was Cow, stared up at Andrew as she asked, "We are living in a dusty, smelly stable. How can we make it a worthy place for a king to be born?"

"You all have gifts. Take some time and think. I'm sure each one of you will come up with a way to prepare the stable for the arrival of Baby Jesus."

With that the bright light dimmed and the angel was gone

Darkness returned to the stable. However, it took several hours for calm to return. The excited animals discussed the assignment Andrew had given them to make the stable a worthy place for the birth of the King of the world.

But now the animals faced a difficult task. Each animal had to determine what gift they were going to give to Baby Jesus.

If you were living in the stable awaiting the arrival of Baby Jesus what gift would you give? 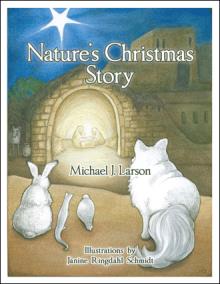 Designed to prepare children’s hearts and minds for the arrival of baby Jesus, The First Advent contains stories and activities for each of the twenty-five days of Advent.

On the first day of Advent, Andrew the angel appears to the animals living in the stable in Bethlehem. He encourages them to use their gifts to prepare the stable for the arrival of baby Jesus. David, the stable boy; One Hump, the camel; Cow, the cow; Roger Rat; Anna, the milk maid; Wooly and Fuzzy, the sheep; and a host of other stable residents must first recognize their own gifts. Then they use their unique talents to prepare presents for that special day.

As the days of Advent pass, the excitement builds, and the animals’ gifts prepare the stable for the arrival of the savior of the world.

Michael J. Larson spent forty-two years educating students about God’s beautiful world as a biology teacher. He and his wife, Kathie, have three children and eight grandchildren. They live on a small acreage in western Minnesota, where the author blogs, gardens, plays golf, reads, and enjoys the peace and quiet of the outdoors. Visit Larson online at www.authormichaeljlarson.com. Larson is also the author of Holiday Adventures for Kids and Nature’s Christmas Story.