The Day the Angels Came to Dunning

Where Heaven and Earth Meet Through a Tear in Time 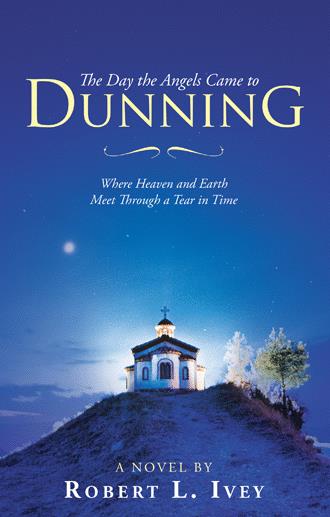 In the dim-colored light of the morning, she saw figures. These figures were above the exposed beams which crisscrossed the ceiling of the sanctuary. Not birds, not animals and, certainly not the painters who were supposed to come and repaint the faded ceiling this week! These were figures like none she had ever before seen. Figures bathed in a soft light standing and sitting quietly, floating and almost shimmering in the top of the room. Without looking up, one would have missed them. But there these figures were, quietly occupying the rafters of this small church as if they were resting birds after a long flight. It was as though an invisible force was separating them from Doris. Were these figures in a separate dimension? For a few moments Doris stared in amazement not sure of what she was seeing, not even sure if they were really there. She closed her eyes and then opened them again slowly. The figures were still there! "Oh, my stars! They're angels!" Doris quietly mouthed the words.

A host of heavenly visitors appear unexpectedly at St. Michael’s AME Church, and local news stations are immediately contacted. Rival reporters Chad Simmons and Cynthia Davis cover the story, where each become involved in life-changing experiences. Is this incredibly unbelievable event a message from God or, as one apocalyptic figure sees it, “an end to his perceived plan of God”? Thousands of people descend upon Dunning to witness firsthand the “visitors,” including the president of the US and other world and religious leaders.

Robert Ivey was born in Southeast Alabama and raised as a "military brat." After having lived across the states from Virginia to California, his family settled in Northwest Florida, where he furthered his education at colleges in Florida and Alabama. The author taught high school for twenty years and has been a college professor for twenty-five years, enabling his love of story telling.