“I Am with You Always”

A True Story of a Supernatural Encounter with JESUS 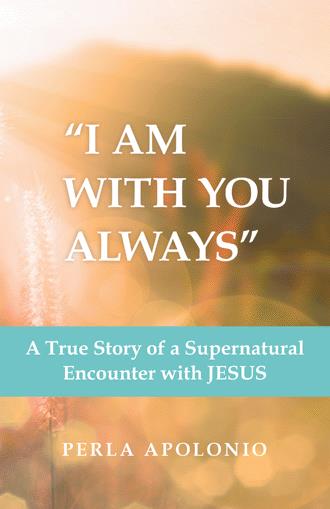 Have you ever wondered if God is real?

Have you ever asked questions like, “If God is real, who is He? Where could He actually be? How far is heaven? Does God see me? Does He know me? Does He like me? Do I matter to Him?”

You might have heard of things like “God is real,” “He loves us,” and “The Bible contains God’s words.” But are these really true? Or is “having a God” a concept that humanity just created in an attempt to give hope to a hurting world?

You may call me Perla. I am an ordinary woman who lives an ordinary life. I am not perfect, nor anything close to it. I have always believed in and loved God, and I have also seen countless miracles in my life. But I never imagined that in one blessed day, I would have the privilege of seeing the Lord Jesus Christ Himself, in person—an event that would confirm with me that indeed, God is real and that He loves us very much.

Jesus appeared to me on June 8, 2014, one fateful dawn when I was not expecting Him. After that event, I started to receive revelations through visions and dreams, which I would also be sharing in this book with you.

Just to introduce myself, I was born in Manila, Philippines. I’m the eldest of five kids who were raised by loving parents. When I was fourteen years old, my dad suffered from a stroke and was in a comatose state for almost a month. After being prayed for by my mom one day, my dad suddenly woke up from coma—an occurrence that the doctors couldn’t explain at that time. That was the first of God’s miracles that I have ever seen with my own eyes.

Starting that day, I had the privilege to see countless miracles from God—only I got to see them by going through a journey with God, faced with storms that only He could tame. Even though my dad woke up from a coma that day, there were still countless times when we had to rush him to the hospital after that event. I remember that we would pray that God would spare my dad's life and that we would have enough money to pay for the hospital bills and other expenses.

Those were tough times, days when we didn’t know if there would be food on the table and moments when every single coin mattered. It was a journey of going through a difficult season yet seeing impossible situations turned around. I could no longer count the number of times when dad was revived miraculously. God would also always send us angels in the form of doctors, nurses, and strangers who would hurriedly drive us to the hospital, along with friends and relatives who would help, encourage, and pray with us.

I now look back and thank God for this season, which may have been difficult, but caused our family to become closer to each other. And most of all, it was through this season that I had the opportunity to get to know God as a living, active, and faithful God, who is also our very loving Father. My dad had just gone home to heaven, but I’m so grateful that God gave us the chance to still be able to spend twenty-six more years with him here on earth, counting from the day when I saw that first miracle.

I now live in Sydney, Australia.

I have worked in the fields of accounting and IT for the past twenty years. I am an accountant and an SAP-certified professional. My job then was a little technical and not of a religious nature.

In February 2019, I left my role as an SAP billing specialist to study full time at a Bible college in Sydney. Please take note however that I am writing this book, not as a Bible scholar, but as a witness—who intends to share with you my supernatural encounter with Jesus and the revelations I have received after this encounter, which I learned afterward to be in line with what’s written in the Bible.

I love my family, and I have friends whom I consider as family as well.

Basically, I live an ordinary life.

I am an ordinary, imperfect woman who loves God and who has always believed that He is at work in my life even though I don’t see Him. I never expected that one fateful day, June 8, 2014, the Lord Jesus Christ would appear to me.

I was caught by surprise when I saw Jesus that day. I wish I could tell you that I was in my holiest self at that time. But the sad thing is that Jesus appeared to me at a moment when I was contemplating sinning against Him. And thinking that what I was about to do was not a huge sin anyway, I still continued to do it even after already seeing Him.

That was the day I realized the meaning of “God’s grace”.

About fourteen hours after Jesus appeared to me, I suddenly found myself having access to seeing the spiritual realm. I never asked for it, but my spiritual senses were suddenly opened. Having witnessed what happens in the spiritual realm, I then realized the truth about sin, its consequences, and the depth of God’s love for us—a love so great that is beyond words and even far beyond our sins.

After that night, I started to receive messages from God through supernatural means. At times I heard God’s voice audibly, and in my spirit, and at other times, He spoke to me through visions and dreams. You could not imagine how shocked and amazed I was when I started seeing these revelations. I couldn’t believe that I was actually witnessing these miracles before my eyes.

This book contains the testimony of Perla Apolonio—a true story of her supernatural encounter with the Lord Jesus Christ.

Perla was blessed to see the Lord Jesus Christ on June 8, 2014, at a time when she was about to give in to temptation. And sadly, despite meeting the King of Kings, she still yielded to sin.

At such a time when she deserved to be punished, she was blessed to personally experience the love and grace of our forgiving God. Instead of condemning her, God has used this event to explain to her the truth about sin and its consequences, and the depth of His love for all of us that He chose to die on the cross to save us from suffering for it.

After this event, she also then started to receive other revelations about God’s love for us, which she also shares in this book.

Perla Apolonio was born and raised in Manila, Philippines, and now lives in Sydney, Australia. She has worked as an accountant and as an IT professional for the past twenty years.

Perla grew up believing in and loving God. She was fourteen years old when she witnessed how her dad miraculously woke up from a comatose state, just after he was prayed for by her mom. Even though her dad woke up from coma that day, there were still countless times when he was rushed to the hospital in the years thereafter. These years were not easy for their family, but it was through this season that allowed Perla to know God as a powerful and living God who never leaves us or abandons us.

She has always believed that regardless of the ups and downs in life, there’s an amazing God, whom we may not see, but has been faithfully looking after us. She never expected that one fateful day of June 8, 2014, she would be blessed to have a supernatural encounter with the Lord Jesus Christ. This experience has taught her that indeed, God is real, that He loves us very much and that He is with us always. She shares her testimony in this book.

In 2019, she took up and completed a course on Bible, Mission and Ministry in a Theological College in Sydney.