I Am Sarah’s Daughter 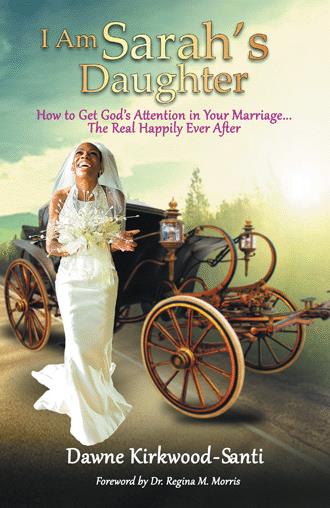 When I was a little girl I wanted to go to ONE place, “H appily Ever After!” I saw this place as not just a happy plac e but a peaceful place. I pictured it as a place where I wod feel safe and loved. I desired to go to the ball in that beau ul dress. I desired to be chosen by the prince and to be  given the glass slipper. I wanted “Happily Ever After” and everything that went with it. I would sit  and daydream about that love that lasts forever. I knew exactly how it would feel. I would imagine  meeting the prince and having stars in my eyes. I’d imagine him sweeping me off of my feet and swinging  me around in circles. I imagined that we would get along and we would never ever fight. I wanted the  love that lasts forever and I didn’t just want it for me I wanted it for my parents too. Even though  we went to church twice a week, memorized scripture and prayed there was discord in our house. It  made no sense. I prayed and asked God to make my parents get along. I begged God to fix my parent’s  marriage but instead they got a divorce. I was left confused but somewhat relieved, thinking that God  did not care about marriages, so I turned to Walt Disney. I knew that Mr. Disney cared about marriages  because he would take the couples where I wanted to go, to “Happily Ever After.” I watched every fairy  tale, Snow White, Cinderella, and I was determined to get to that destination. “Happily Ever After” was  the goal.  As I grew up I realized that I was not the only woman trying to get to “Happily Ever After.”  I watched as women found the “prince” married him and did not live happily ever after, and I joined them.  I watched blissful happiness turn to divorce but I couldn’t understand why. I did not know what it took  to get to the “Real Happily Ever After” I began to doubt that it was real.  Like many women I had  the butterflies and I couldn’t wait for him to call. I would tell friends about this amazing man and  then something happened after I would say I do. I went back to God and He told me that he wanted me  to write a book, but He said, “You have to live it first. I knew that it would not feel good.  I had no idea that He was going to show me how to get to “The Real Happily Ever After.” God took  all of my questions, frustrations and broken dreams and led me to Sarah. He began to show me that my  focus was on the prince instead of on The King and He showed me that it was possible to live in The  REAL Happily Ever After”, now through this book He’s showing you how.

Ever since she was a little girl, Dawne Kirkwood-Santi wondered if she would ever find her prince and live happily ever after. Even though she knew exactly what she wanted, Dawne still found it difficult to get there. It was not until God eventually led her to Sarah, the wife of Abraham, for inspiration that Dawne realized her focus needed to be on the King rather than the prince before she could ever attain her real happily ever after.

In an inspiring spiritual guidebook, Kirkwood-Santi relies on the Bible for guidance to explain all the ways in which God provided direction in Sarah’s life while inviting believers to use Sarah as their own example while leading lives dedicated to trusting God. Interspersed throughout her spiritual wisdom are practical tools that provide a roadmap for wives interested in enhancing their marriage. Included is Kirkwood-Santi’s personal testimony as well as decrees and declarations that invite wives to pledge to become Sarah’s daughter and claim all the benefits in the name of Jesus.

I AM Sarah’s Daughter shares wisdom, scripture, and personal testimony to teach wives how to attain everything they want in marriage—without changing their husbands in the process.

Dawne Kirkwood-Santi is a prayer warrior, speaker, and wife who is madly in love with her husband, Jim. Their love for each other is featured in a forty-seven-second video that has been viewed by over 15 million people and featured on Good Morning America’s Facebook page. Dawne is also the author of Giving Birth to Me: The Guide to Success in Birthing Your Dreams. She currently lives in Houston, Texas.