Where Are the Davids?

Dare to Become the Leader That God Created You to Be 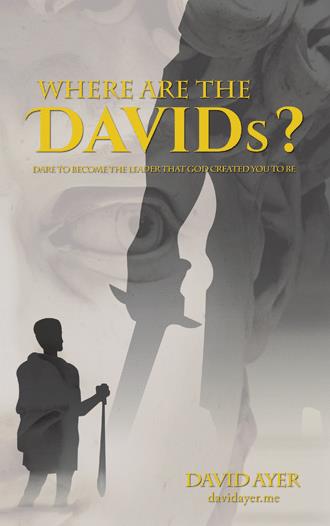 and the people you lose along the way

1After David had finished talking with Saul, Jonathan became one in spirit with David, and he loved him as himself. 2From that day Saul kept David with him and did not let him return home to his family. 3And Jonathan made a covenant with David because he loved him as himself. 4Jonathan took off the robe he was wearing and gave it to David, along with his tunic, and even his sword, his bow and his belt.

In the Bible Jonathan is a man torn between two kings. He was David’s best friend but Jonathan was also King Saul’s firstborn son. Torn between allegiances to his father and his best friend, Jonathan ends up a casualty of his father’s selfish ambition to continue his legacy and in one day both father and son died in battle.

If you are like most “Davids,” you may feel like people are always leaving your life. Like a turnstile on the subway, people often come into your life in a flash and then are gone as quickly as they arrived. So many times we wonder, “Why?” “Is something wrong with me?” “Why is it that everyone I love seems to leave?” The reality of the life of a David is that you are going to lose people along the way as you walk with Jesus. There’s a few reasons for that. I’ll unpack a couple here but you need to remember one thing:

God is taking you somewhere.

Everything that He brings you to in your life is to guide you to your destiny in Him. Our relationships are part of that molding. People can choose paths contrary to God and His will, and they often do, but He will play the cards He’s been dealt to bring you where you were created to be if you stay faithful to Him.

Three People You Lose Along The Way

the people you have served, admired and loved

The relationship between Saul & David is one of the most complex in scripture. Saul loved David and David loved Saul but Saul is trying to kill David. This love becomes clear in their two meetings after David fled from Jerusalem to save his life from the King’s jealous rage.

When David finished saying this, Saul asked, “Is that your voice, David my son?” And he wept aloud.

Saul loved David. He had faithfully served Saul. David had been Saul’s peace in times of spiritual torment (1 Sam 16.23). David had been Saul’s armor bearer (1 Sam 16.21). Most importantly, David won victories that Saul could not. So long as Saul felt relatively secure in the Throne, he allowed David to thrive and win victories, but once he realized that David was created to rule Israel, that all changed. From that point on he tried relentlessly to kill David.

If you are a David, you will have “Sauls.” “Sauls" are fearful of so many things. They are fearful of your anointing. They are fearful of losing their throne/position. They are fearful of losing the opportunity for legacy through nepotistic succession. “Sauls” keep you down, suppressing your opportunities for fear of your success. At times they send you to do a job that they know they can’t do for the purpose of advancing their kingdom but upon your triumphant return they quickly send you back to your corner as they take credit for your accomplishments… that is, until you can’t be hidden any longer. As your fame grows so does the threat to “Saul’s” security and throne. After a while he begins to throw javelins. Confused, you make excuses for him saying it was unintentional or that something was “misunderstood” but soon you realize that you’re the only one misunderstanding. Saul is trying to kill you. This is both terrifying and deeply saddening. You have loved and served this man. You have risked your own life and future to protect and advance his kingdom. Through the hurt of betrayal and the deep wound it leaves, you know one thing:

You need to let Saul go.

Letting “Saul” go can take a lot of forms in different situations. You might need to set new boundaries for the relationship. You may need to disassociate with them socially. Sometimes you may in fact, have to run somewhere where you can be safe from thrown javelins. Whatever it looks like, this is not something done quickly or in the heat of the moment. The men in your life aren’t always throwing javelins when they hurt you. There will be times that you will need correction and redirection. That is part of growing into spiritual maturity. Your anointing doesn’t give you all the answers. Be patient. Find the heart of the person you are serving and determine, are they for you or against you? It was only after a long time of increasingly obvious attempts at his life that David determined to leave Saul’s court.

There is a part of the human soul that cries out for justice. It is part of the image of God in each of us. That cry for justice, though right, must be left behind. We must forgive as David forgave if we are going to ascend into our kingdom assignment as he did. How do I know David forgave Saul? Because he didn’t kill him. David had two clear opportunities to kill Saul but he never touched him. Even after all that Saul had done to David, when he found out the King was dead, he tore his clothes and mourned for him. If you allow your hurt to become bitterness, you will abort the character God that God is trying to shape in you through this experience. Remember, you are in the Wilderness. God is shaping your character through the process of trial. Don’t let the enemy steal your victory.

Deep in our souls we all want our lives to count—but do you know why? Because God made you. He crafted you with purpose. Inside your DNA is not just the code for your hair color, height, athletic ability, intelligence, or any other such things. Those are just the things that we can see and measure. No, in your very makeup are the seeds of greatness that God intended for you to cultivate and grow to bring his light into this dark world.

In Where Are the Davids? author David Ayer challenges you to become more than just a casual liver of life, observing the ordinary and experiencing the average—because that is not what God intended. Where Are the Davids? is the key to unlocking the door of destiny in your life. This book is the culmination of years of study and over twenty years of ministry experience. Understanding King David’s life as the spiritual model revealing how God raises His warriors from obscurity to reign, this book will show you how to become the champion that He created you to be.

Do you want to change the world? Do you want to escape the ordinary and achieve the greatness that God has intended for your life? Then let the original giant-killer, David, show you how. For more information go to: davidayer.me

David Ayer has been involved in ministry for over twenty years. After an incredible salvation experience he became addicted to the presence of God in prayer, and the miracles began to flow. Soon David and his wife became part of an international evangelism team, preaching in several nations and seeing thousands both saved and healed by the power of the name of Jesus. Since then he has served God as an evangelist, youth pastor, assistant pastor, lead pastor, and church planter, also mentoring several ministers across the country. David is married to his beautiful wife, Denise. His two daughters, Gavrielle & Moriyah, are his pride and joy. He holds two Master’s degrees in Theology; he is currently completing his Doctor of Ministry.