The Legend of the Christmas Dachshund 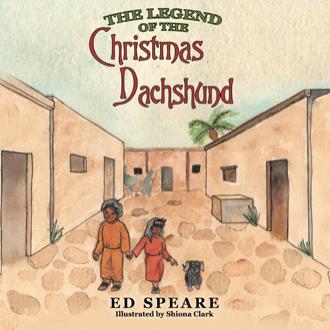 ...Just as Jacob was about to bark to relieve the tension, the stable filled with a great light, so bright he had to shut his eyes. The smell of something new and wonderful wrapped around him like a blanket, and he heard an unusual noise. In the woman’s arms he saw a brand new baby human crying loudly. The radiant light had gone, but the stable remained bathed in the glow of the moonlight and the light of a very bright star that seemed to be right overhead! All the animals in the stable gathered in a hushed silence. Perhaps, like Jacob, they sensed that they were in the presence of more than a human baby. The baby, so new to the world seemed older than the world itself. Jacob crawled into the circle of light cast by a few small oil lamps set near the family.

Jacob rested against the woman, putting his head between his front paws, and looked deeply into the child’s face. He knew in his doggie spirit he was in the presence of the Holy family...

...By the time the visitors left, it was well after midnight. The stable fell quiet and the exhausted new mother drifted off to sleep in the arms of her husband. They placed the baby in a small manger filled with straw. Jacob yawned wide and long.

Perhaps I should go into the inn, pick up some crumbs off the kitchen floor and catch a nap by the warm hearth before daybreak.

As he rose to go, he sensed something bad. It made the fur on the back of his neck stand straight up. Staring into the darkness, he spotted several gleaming pairs of beady red eyes in the flickering light of the last oil lamp burning. Jacob quivered with excitement!

They were all around the edge of darkness that lay just beyond the human family.

Jacob’s warning—which usually sent the rats scattering—had no effect. This group seemed determined to creep closer, showing no fear of Jacob or the humans. He sensed evil in their midst, but could only smell rat, a scent he hated a thousand times more any other! ...

Jacob is a brave little dachshund who, after a long journey to the Middle East, finds himself part of a family of Bethlehem innkeepers. Besides being a companion for the innkeepers’ children, Jacob’s main task is to keep mice and rats out of the stable. One night after his curiosity and nose lead Jacob into the stable, he encounters two new humans and an extra donkey. Although he is alarmed at first, Jacob soon realizes that the humans are not threatening and settles in a corner to keep watch. It is not long before a bright light fills the stable and a special baby is born. Under the watchful eyes of Jacob, shepherds and wise men visit from afar. But when rats attempt to attack baby Jesus that night, Jacob chases them away, only to become injured. As he limps to the manger, Jacob receives a miracle that creates a special memory for the little dog—and a timeless Christmas legend. In this inspirational children’s book, a little dachshund who witnesses the birth of Jesus receives his own miracle after he saves the baby from danger.

Ed Speare is a retired military officer, husband, father, and grandfather who was inspired to write his first children’s book, the Legend of the Christmas Dachshund, years ago. Ed and his wife live in Woodbridge, Virginia.