The Isle of Fire and Ice 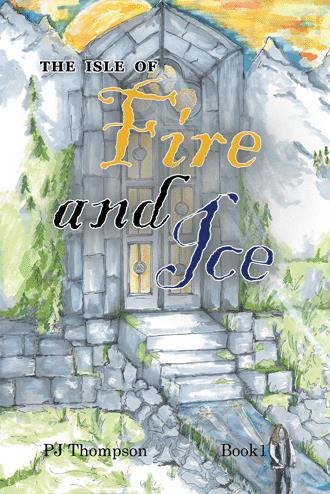 Once, long ago, on an isle of fire and ice there lived
a prophecy of hope in a land darkened with despair ~

"One shall come who will have burned in his flesh a triangle of blue.
Beside him shall stand the wolf-marked and together they herald
the beginning of defeat for a great evil."

Dare shivered with cold in his short tunic as he fled down Rave's back stair. The frigid stone of the ancient keep was slippery from last night's storm and he tried to be careful.
From the portal at the top the stair Ursul screamed, "Dare! Return at once! Do you hear me? At once!" The fleeing serf heard both disbelief and fury in his master's voice. Startled, he stumbled on the slick stone and crashed hard on his right hip and elbow. Panic and alarm raced through him. He ignored the sickening jolt of pain, pushed himself up and raced down the remaining steps.
I won't turn back! I won't! Still, he was sick with fear at his brash, foolhardy act. I've decided to run and now I must escape. The alternative is--unthinkable.
Perspiration trickled down Dare's face and body as he dashed toward the outer ward. It lay outside the keep but remained within the confines of thick stone walls. Yet it was closer, much closer to freedom. His breath came in quick, short gasps. Pain from his fall pulsed in sharp agony through arm and hip, causing him to limp.
If I starve in the forest, it will be better than the misery I've endured these last few years. He held tightly to this idea and made an effort to think ahead. Will Ursul send someone after me, or will my master continue the chase himself? Dare decided Ursul would do neither. Josata, the overseer, would be waiting for him. The old servant was extremely irritable because important guests of the Duke's were coming. Dare knew Ursul could not spare any of the other drudges from the frantic preparations for their visitors' arrival. Anyway, not many of them are big enough to bring me back, he thought with a grin. His face brightened and, for a moment, his spirits lifted.
This is a good time to run, what with the swarm of activity all through the keep. I did not plan this. Bore's bow, I wish I had! However, the preparations for important folk coming will keep Ursul busy--for a time at least. Another possibility occurred to him as he threaded his way through a maze of stacked goods, barrels and lumber. Will he send a message telling the guards at the main gate to be on watch and take me prisoner? Will he go to all that trouble for one clumsy, insignificant drudge? The prospect made his stomach cramp. The main gate was his only chance to get free of the fortress! All the others were locked.
He forced himself to stop and think clearly. It will not occur to Ursul that I'm leaving for good. He'll think I am running from a beating. Chances are good that he has not called a general alarm. Why should he? Where can I go? Drudges are not allowed out of the keep. These thoughts calmed him.
There were no sounds of pursuit as Dare broke into the bright sunshine and the bustling commerce of the outer ward. He needed to stop, to rest and plan--but where? A small stable was close by, dark and out of the milling traffic and noise. He slowed his pace and casually grabbed an armload of hay from a deserted wagon. He carried it, with a shuffle and a half-witted expression, to the small stable. Under Ursul's brutal apprenticeship, Dare learned to feign slowness and ignorance. He hid his quick mind and wit behind a fabricated dullness that became second nature. The young drudge found that when he played the half-wit, Ursul and others as well, didn't suspect him of thinking much less planning. Often they didn't even notice his presence…he became invisible. He smelled the distinct odors of horse and hay as he entered the stable's cool shadows. Once inside, he tried to devise some kind of a workable plan. First, he needed different clothes. The gray drudge's tunic identified him as a castle servant. Going outside the keep was one of the many things drudges weren't allowed to do. Then he must find food, water and if possible, a knife. Once he reached the forest, he would need them to survive. Dare began to search the small structure.
He heard a sound outside the stable door that suspended his thoughts and made his heart race again. With a new cunning born of desperation, Dare quickly found a place to hide.
"Bring the Healer's horse over here, Raff. That's right, this be his stable--him leaving at all hours and not wanting a stable hand."
Dare scooted back, into the dark corner of the first stall. He quickly pulled armloads of hay over himself with a silent plea. Don't put him in here.
"Put him in the far stall and do get some fresh hay from that wagon out there," the kindly old stable hand ordered, as he puttered and muttered to himself. He and Raff rubbed the horse down and finally left.
Dare breathed grateful thanks to the Maker. For a time he did not move, but when all seemed quiet, the anxious runaway quickly searched the stall he was in--nothing.
He decided to chance disturbing "Ollif," as Raff called the horse, and search the rest of the small stable. As he softly talked to the animal, Dare went through the saddlebags on the rail of the stall. He hoped his voice would reassure the animal. No need to worry; Ollif snorted softly and then ignored him as he munched his hay. 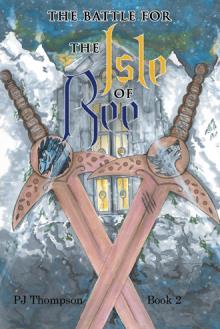 The Isle of Fire and Ice is a fantasy tale about two young men, Dare and Bar, who are caught in an exciting adventure that sweeps them toward the fulfillment of an ancient prophecy. Once, long ago, on an isle of fire and ice, there existed a prophecy of hope in a land darkened with despair. “In that time when wickedness holds full sway, two shall stand in evil’s way. Uriisis and wolf marked this pair; ancient marked swords will bear. Their appearance will display the Maker’s mercy in that day.”

P J Thompson lives with her husband of 52 years in Denver, CO. They have three married children and eight grandchildren. She and her husband are retired and enjoy traveling to see their children, friends and our wonderful country in their RV. She has BA degree in Sociology, Psychology and Social Work from Oklahoma University.