To Stir Crazy and Back 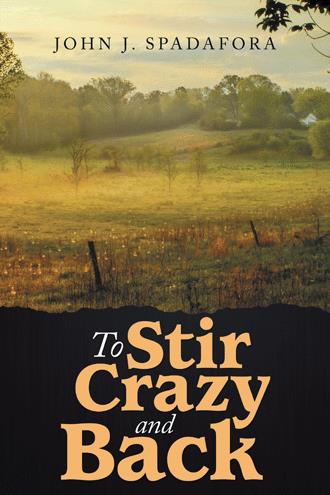 I knocked on the screen door and could see Bill sitting inside. It was an old farmhouse with a very dark living room. Bill told me to come in, so we walked in and sat next to him. I looked around, wondering why it was so dark. As I scanned the room, I noticed what looked like a Beretta handgun between me and Bill. I immediately looked at him and saw him gazing at the ceiling. Just then he reached over, grabbed the gun, and shot at the ceiling, scaring me out of my skin.
Overjoyed, he shouted, “Got him.”
I looked up at the ceiling and realized he had shot a BB pistol at a fly. It was now embedded in the acoustical ceiling, which was full of black specks. It then occurred to me that the black specks were prier fly executions. I immediately excused myself, grabbed Kerry, and went home as fast as I could. I told Gloria about the incident and said our neighbor was crazy and that we must be too for having moved into this place of never-ending surprises and calamities.

John J. Spadafora is at the peak of his financial career when his wife – distraught that he’s forgotten the meaning of life – plans a vacation that changes their lifestyle and drives her husband stir crazy.

The city boy ends up buying a 213-acre dairy farm along with five cows that he spends three months trying to track down after they escape.

His new life becomes a nightmare, and his huge barn catches fire. He gets lost on his own property – and the fact that his neighbors have to find him is the least of his embarrassments.

Local residents are convinced that the author is part of the Mafia because he pays for everything with crisp hundred dollar bills – and they always ask what he’s doing.

After five months of catastrophes, he begins talking to the trees, and by the sixth month, the trees start talking back. Finally, his wife realizes he needs to return to the city to regain his sanity.

Join the author on a hilarious journey that proves that you can go stir crazy and come back again.

After Graduating from the University Of South Florida and entering the sciences world as a Chemist John was faced with a major turning point in his life. American Cyanamid, his employer, faced with government resolve to update its Florida Chemical plant or shut it down decided to layoff this Chemical Plant location. NASA also had a very large layoff and it became very hard to stay in the science world. Redirecting his efforts to Pharmaceutical Sales became monumental in having him realize he was a people person and cloistered lab life would never again enter his radar. Enjoying sales and investing became his new efforts, earning him enough money to undertake this unbelievable adventure as portrayed in this book.