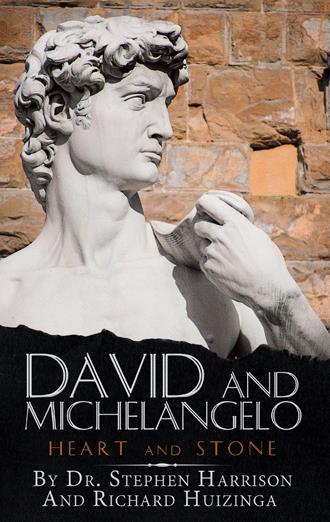 We may not see the heart of God in all the stories of David, just as we may not admire David from all angles. We may have to overlook some imperfections in order to see the man who once had a heart after God’s own image. In our case we began chipping away at the image of David that most of us have had in order to find that heart of David that is a man after God’s own heart.

If we examine what the purpose of the story of David is or his symbolism without becoming too enmeshed with the idea that the symbol represented by the statue signifies perfection, only then can we reconcile the good of David's life with the less than fulfilled. For a symbol to be useful it must point to something beyond and be stripped of the pretension that it is the perfect reflection of the ultimate meaning of life. David may indeed be a foreshadowing of the Christ or true perfection, but in order to do so he needs to die to self. David, of course, did not sit down and pose for Michelangelo. Arguably, though, David did pose for the court historian, so to speak, who recorded much of David's life-flaws and all. As such he is a broken symbol much along the lines that Paul Tillich describes in his book Dynamics of Faith. This symbolism is still quite useful in that we see even our flawed symbols reflect a certain image of God. It is Michelangelo who depicts David’s physical image. It is David himself who projects the heart of God through glimpses in the Psalms etc., but it is God who shows his heart through some of the projections that leave a lasting image.

The beauty of the historical David is that unlike the statue by Michelangelo, his flaws are very much exposed. God can use those flaws to show that even seriously flawed symbols can reflect a certain image of God and point beyond itself. The details of Michelangelo’s statue reveal such perfection as does a scrutiny of David's life reveal his fatal flaws. David may well have run as was some custom, stripped into battle, but he is stripped here figuratively speaking for our forensic battle that searched for the heart of God. God is in the details and able to be discovered amidst an imperfect world full of flaws and flawed people. God sees some of himself in each individual after our own illusions have been shattered. We are no Michelangelo. We are not the first to chip away at David nor will I complete the picture. Just as others started the David project before Michelangelo so too will others come along and finish the project for us. Some will look at this work and see just a crude stone. Others will see something more. Others will look and see in this picture the same stone that David used to kill Goliath and continue to see the admirable warrior hero. Others will see the stones that David’s own men were going to use to kill him with his imperfections when they attributed their loses to his strategies. In our title we have the fusion of heart and stone in David and Michelangelo. Sometimes the heart and stone images will come together in David’s heart of stone, which he exhibits at times for no glorious image. For example, he has the classic heart of stone when he rejects Michal after her return from the enemy captivation. David also has this heart of stone when he rejects Absalom and the opportunity to fully connect with him.

A rare individual will perhaps see both of these symbols as one in the same along with a fusion of other elements. They will no doubt add to our crude sculpting and make a better picture. David wanted a dynasty that would last forever. We can argue how that dynasty may continue, whether through New Testament lines or through his own Psalms, but we can be sure that whatever does endure must be consistent with the heart of God. After we have shattered the image of David, his moral impact does remain.

We all need a hero. Accordingly, many people will pick up the pieces of our shattered image of David and reconstruct the hero that they wish to see. However, if we are going to have the whole image of David we need all the fragments, including those which don’t reflect as well as we would like to. The point is that God still uses David, even with his imperfections. He doesn’t stop him from worshiping, he only readily notes that David is not prepared to worship God on David’s terms, because even a good heart after God’s own may be a good starting point for something enduring, but it is not by itself enough.

The heart after God’s own is that portion of ourselves that remains attracted to God despite our flaws. It recognizes our image of God that is at our core of being, but yet has not achieved perfection in its daily manifestations. The heart points to the perpetuity of opportunity for fulfillment. Our flaws may take us from complete realization of that heart, but the heart brings us back to perfection-God’s perfection, not ours. The heart of God seeks its fulfillment in a wide range of symbols that cannot be confined to a building or any one credo. When we look at Michelangelo’s David we are made to feel as though we are looking at David himself. As we look at the biblical David we realize that we are looking at ourselves with all of the potential to reflect the heart of God or to reject the cornerstone that redeems us from our deeply embedded and sometimes hidden imperfections. The first time David is a symbol for purity is in I Samuel 13:14. The last time is Michelangelo’s David. May these bookends help you find your own angle of inspiration.

In David and Michelangelo: Heart and Stone, authors Dr. Stephen Harrison and Richard Huizinga seek to identify the traits that justify the “heart of God” as an early descriptor of David. By exploring the life and trials of David—his successes as well as his failures—we can get a complete picture of this man after God’s own heart, learning in the process how we too can always seek God despite our imperfections.

The heart after God’s own is that portion of ourselves that remains attracted to God despite our flaws. By exploring the enduring image and character of David, we can begin to chip away at the image we had in order to find that heart of David that is man after God’s own heart.

Dr. Stephen Harrison is a preacher’s kid with nearly forty years of medical experience, and Richard Huizinga is a retired health-care executive who enjoys explaining the motivation of our complex social situations. The authors enjoy reflecting and meditating on biblical stories, discussing them in small-town restaurants and then writing about them in a way that will draw believers back to the original stories to uncover new meaning.