The Derry Boy and the Egg 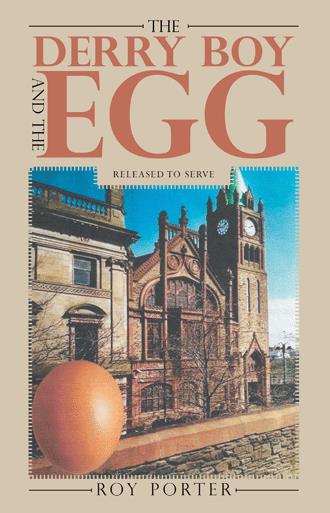 To say that the Derry Boy was born in the Bogside would cause consternation to arise among his Unionist minded relatives; indeed, some of his ancestors would—well, figuratively speaking—turn in their graves. In a Derry newspaper of a few years ago, however, the author of an article on the city had classified Foyle Road as part of the Bogside.

(For readers less acquainted with the term, the Bogside is an area of Derry City located outside the famous city walls. A majority Catholic/Irish Nationalist/ Republican area, it shares a border with a Protestant/Ulster loyalist enclave known as the Fountain; at times grounds for sectarian violence.)

The Derry Boy and was born in No. 53 Foyle Road on the twelfth of March nineteen-thirty-nine in the home of his aunt Lizzie and uncle Charlie (after whom he was named). My name is Robert Charles Porter, but my mother, for reasons which she never explained, decided to call me Roy.  I am the author of this book and I am –  The Derry Boy!

This wonderful city of Londonderry where I was born is a divided city. In my young years, the city was only divided by the mile-wide River Foyle, but now it is divided by names. Let me explain.

The original name of the city was Derry and is an anglicisation of the Irish name Doire, meaning Oak Grove. In 1613, the city was granted a Royal charter by King James the First, and it gained the prefix London to reflect the funding of its construction by the London guilds.

While the city is more usually known colloquially as Derry, Londonderry is also commonly used and remains the legal name. The old walled part of the city lies on the west bank of the River Foyle, which is spanned by two road bridges and one footbridge. The city now covers both banks (Cityside on the west, and Waterside on the east). Both areas are joined by the two tiered, now iconic, Craigavon Bridge. The top deck of the bridge has a road for traffic and two footpaths for pedestrians. The lower deck of the bridge, which originally carried a railway line for freight wagons, was made into a road in 1968. The city is also known by its affectionate nickname the ‘Maiden City’ by virtue of the fact that its walls were never breached despite being besieged on three separate occasions in the 17th century, the most notable being the ‘Siege of Derry’ of 1688/89. The second bridge, the ‘New Foyle Bridge’ was opened in 1984 and a footbridge named the Peace Bridge opened in 2011. I must admit, at the time of writing, I have not crossed the foot bridge.

The City was also given another nickname, ‘Stroke City’ by a local broadcaster, Gerry Anderson (now deceased and missed by many). This was due to what became the ‘politically correct’ use of the notation Derry/Londonderry; the name which is widely used today by the media and by public transport.

As stated in my introduction, I was born in No. 53 Foyle Road on the West side of the River Foyle, at the home of my aunt Lizzie (my mother’s sister) and uncle Charlie. My father was a seaman in the Royal Navy, trained in Gosport, England. It was here he and my mother lived, and where she gave birth to a son, my brother Kenneth. Prior to his overseas posting my parents decided to move back to Londonderry, where they lived for while with mum’s sister Lizzie. During a period of extended leave, my father purchased a house at number 7 Dervock Place in the Waterside area of the city. My parents moved there when I was just nine months old, but I spent a lot of my early childhood in my birth home. During those war years, while my dad was away in the navy, mum would walk at least once a week to Foyle Road with my older brother, Ken, and me. I don’t remember much of the war years, being too young, but I do remember my ‘Mickey Mouse’ gas mask—and the banana!

Once, when dad was home on leave, Ken and I greeted him warmly, but with our eyes firmly focused on his kitbag. After the initial hugs and kisses, we waited eagerly for him to show us his treasures. What Ken got I don’t recall, but I was given a banana. I had never seen a banana before, so I began shooting everyone with my new ‘gun’. I was so surprised when, laughing, my mum took the ‘gun’ from me and peeled it. How I enjoyed eating my ‘gun’!

With the Second World War virtually over, as a child of five, I found myself sitting in the infant classroom of Ebrington Primary School. I was not, however, being taught my three R’s (if you can’t remember, they were reading, ‘riting and ‘rithmetic. How sad was this destruction of the English language?). No, it was Sunday, and as a cradle roll member of Ebrington Presbyterian Church, whose hall and rooms were used on weekdays as a school by the Education Authority, I was being taught about Jesus. This was a very special Sunday in my life because, as I watched and listened to my teacher, Miss Jean Colhoun, teach about Jesus, I saw her face glowing, and as she spoke of the love of Jesus, which she obviously was filled with, I wanted to know her Jesus. So, in that small classroom, as a little child, I gave my life to Jesus. I, of course, didn’t fully understand what salvation was all about, but as I grew older, As I grew older I realized that my Ebrington classroom experience was my release from the penalty and the power of sin. I became very aware of the presence of Jesus with me at home, at school and at play.

The Derry Boy and the Egg

The Derry Boy is primarily the story of the author, and it tells of his childhood years, his salvation, and the faithfulness of God through the later ups and downs. The book includes items of historical interest that may be new to some readers. The story also records the involvement of the Porter family in the lead-up to the Christian ministry in which the author and his wife eventually became involved.

The Egg is the story of a memory that took Roy and Anne Porter on a journey to Switzerland in order to become part of a ministry that would see thousands of children and young people and, indeed, many adults come to faith in Christ. The egg was Anne’s memory; the ministry came about as a direct call from God to Roy. The book not only tells of the role of Roy and Anne Porter in this ministry, but it also tells of how their family also became involved. The Egg is written as an encouragement to other Christians in ministry and, most importantly, for the glory of God.

Roy was an engineering supervisor with a large American synthetic fibre company, his wife Anne was a midwife. They both then resigned from full time employment to become missionary directors with Child Evangelism Fellowship (CEF)®. Their ministry was to children and teenagers in Northern Ireland, Inishown, Co. Donegal, and in the Isle of Man. Now retired, Roy is the author of children’s short stories, Christian novels and devotionals. Anne supports him as reader and distributer.

Contact Roy for details on 07484765866 or by email robertroyporter@aol.com