A nonverbal son, his art, his mother’s faith and family’s bond 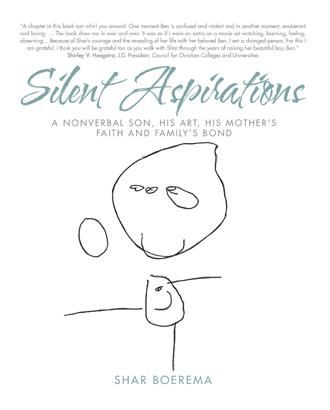 Ben joined me at that pre-eighteenth birthday IEPC (Individualized Educational Planning Committee) meeting, drawing faces with a new pen - a gift from his principal, always finding ways to celebrate hard and important things. His team (all of the professionals in his life and I) talked guardedly about his attitude, his handsome, beautiful smile, and... his behavioral problems. We all left out trigger words like timeout, pulling hair, attacks, and biting, with Ben in the room. We changed some goals for the next year, then together we signed all the papers – he, carefully, with his distinctive “B.
Insert Image12-1

“Adulthood” and all that it meant was too much for the two to four-year-old brain inside that 6’2”, 200-pound body! My husband and I often lay awake wondering what had happened to our smiling, dimpled boy. Phone calls, emails, and letters from the school came as fast and furious as his increasingly hostile moods. The first ring of the phone made me feel anxious and sick.
Attacking someone – a teacher, an aide, a bus driver, a small boy - became daily occurrences. Often, I was called to come and drive him home because he wasn’t safe on the bus. Tears coursed down my face as I read a written report detailing every moment of Ben’s attack on a substitute bus driver – repeatedly; wildly!
Ben’s tears and remorse usually followed each episode, but we were all miserable - together. These outbursts had been rare and almost manageable throughout his life, though I know Ben's siblings took much more abuse from him than they revealed to us. Now they were no longer safe in our home when Ben was around. I wondered how badly he could hurt someone with the superhuman strength he exhibited at those times, but quickly dismissed those thoughts as disloyal… wrong somehow; angry at my shame. I gained a new empathy for parents of wayward children, or those having run-ins with the police.
Ben’s behaviors had blown way out of control. Our last solution, so he could continue riding the bus, was strapping him into a bulky, industrial-like shoulder and waist harness - like a dangerous animal - each morning - and unbuckling him each night so that he could ride the bus to school and back.
We began the pharmaceutical journey that has continued to this day, very probably for his whole life. After two unsuccessful tries, and several scary months in this strange new world, we found the right medication - we thought. He was diagnosed first with schizophrenia, changing more correctly to a bipolar mood disorder along with severe separation anxiety. That process of diagnosis, with medication, would take much longer, and included an added diagnosis of severe attachment mood disorder.
A formal hearing was set. Dad, Ben, and I walked into the old brick courthouse, standing at the groaning elevator, watching policemen and handcuffed individuals arriving for their hour in court. We stood for a bit in the hallway before we were ushered into the judge’s chambers – together. Smiling, Ben's attorney welcomed him, asking him to sit directly in front of the judge's bench. We were given seats behind the rail. We gave Ben lots of smiles and thumbs up, praying he wouldn't have an incident right there.
The judge asked me to rise and ‘take the stand.’ (Then I prayed I wouldn't have an incident in court!) I raised my right hand and swore to "tell the whole truth and nothing but the truth, so help me God."
“Yes,” we wanted to become his legal guardians. “Yes,” we promised to do the best we could for him. Inwardly I screamed, Haven’t we been doing that for 18 years of sleepless nights, bedwetting and therapies, educational meetings, phone calls, canceled plans, ruined dreams, and tears? He thanked me and said I could sit down. Then he questioned Ben’s caseworker.
“What would you say his mental abilities are? In your opinion, will they ever change?” Tapping his pen against his computer screen, eager to get to the end of his day, the judge asked for a short, concise answer. “No, your honor, his mental ability will remain between two to four years of age. That will not change.”
He then addressed Ben, telling him of his rights. Ben, of course, understood nothing, turning around repeatedly to be reassured by us, smiling warily. I knew it was just a formality. But the cold list of black and white facts and the magnitude of Ben’s lifetime needs along with the responsibilities we agreed to bore down like a lead gavel. I fought my emotions, but tears had surfaced and would not stop.
The black-robed personage asked Ben if he agreed to the guardianship as it stood. Don’t go crazy now, Ben! He continued to smile and turned to look at us again, puzzled by my tears. I grinned and waved assurance I didn't feel. Leafing through his papers, an electronic recorder received his verdict: "Let it be noted,” he droned in his five o’clock voice, “that he did not respond.”
“No!” I nearly screamed. He cannot respond in words until we open our eyes in heaven. Do you have any idea of what that means for us? For him? But a judge’s job is one of facts and signatures, not feelings and emotions. We were ushered from the courtroom then, wearing our new title: Legal Guardians. “Ben’s Parents”: no longer enough. We had just become Ben’s legal voice.
As we were walking out to the parking lot, Ben’s attorney reminded us of the many families who break up over the stress of raising a child like Ben, and how good it was that Ben had such a stable family. Ed and I squeezed each other's hand, knowing what we had promised. We drove home in silence – all three of us – still together.

“For seven years, I worked very closely with Shar Boerema, encouraging ministry wives. …Often Shar’s life experiences with Ben helped people in our meetings who also had disabled children. Shar’s love and hope for Ben made it a transformative experience for the women. This is why I’m so pleased Shar has given herself to the arduous task of putting her life with Ben in print. Shar’s faith and depth of love will delight any reader.” Gail MacDonald, author, wife and ministry partner to Gordon MacDonald.

Benjamin’s siblings became extremely vulnerable for this book. Shar has included letters and articles they wrote honestly about life with a brother who broke all the social rules.
AND, you’ll find resources for siblings of special needs persons inside!

“Even when he's being facetious he will bring smiles to strangers and friends faces, something I certainly don't do, which makes me smile just thinking about him poking someone with a scowl, declaring "bubbee," and turning away. Exactly what I want to do to people sometimes."
SPC James Boerema, United States Army

“I’m shown how to say hello by his bear hugs, sloppy kisses, and loud “Hi!” I was taught how to dance by the silly moves he’ll make when his favorite song comes on the radio. I know to be myself at all times because Ben isn’t afraid to be himself.” Aubrey Boerema, CTRS

“…a woman started weeping [at the rehab hospital where Rachel works] and repeating in distraught and soul wrenching tones, “No, no, no, no, no …” She has had few other words since her injury... I couldn’t handle hearing what I had heard so clearly when I was little: when Ben came to the end of his rope to feel his inability to communicate or be understood, he would cry with words and sounds that only his tongue could form.” Rachel Boerema,OTR/L

“Loving a Benjamite means carrying a thousand little coffins and never knowing when a new one will open up and lay a piece of your heart to rest. … No one imagines motherhood as a distant gaze from their toddler’s gorgeous eyes and the emotionally draining attempts to connect with them all day. Little girls don’t grow up thinking that their big brother won’t have a conversation with them, ever. Grandparents don’t expect to counsel and console sons and daughters … exhausted, angry and heartbroken. Dads don’t expect to try teaching their sons to shave while knowing that it will always be someone else’s job.” Jen Boerema Miller

A winner of Guideposts Writers Workshop, Shar uses the artistic sketches of their nonverbal son, Ben, with her journal entries and very personal thoughts to bring light to his silent life of global encephalopathy and mood disorders. During seven years as a worship leader for Focus on the Family, she met with many ministry moms of special needs children, all around the country. Those women inspired her to encourage all families who feel ostracized by life-altering diagnoses.

“My aspiration is to shine a bold beacon on the Bens in our world, while allowing my readers to laugh out loud at his sparkling humor and resilience. I pray our story will inspire others to mine deep for the beauty often found in the middle of a tragedy. I also hope many young people, or older persons searching for a meaningful vocation, find this book.”

Shar is a mom of five adult children, one son-in-law, two grandchildren, and is a grateful wife of over forty years to Ed. To fund her writing habit, she teaches piano and voice at a great music studio in Spring Lake, Michigan.

Thank you! A percentage of profits made from the sale of this book will be donated to MOKA.org, the foundation that houses and cares for Ben.