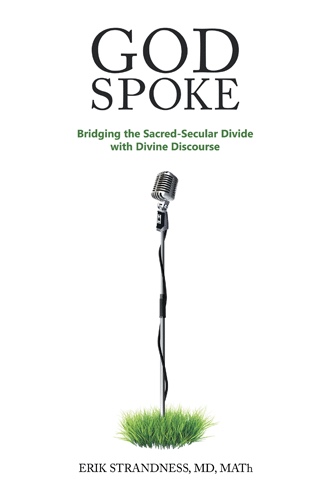 God made it clear that His words would not return to Him empty, so He created beings that would be mouthpieces of praise for the planet. God was not content to just have His words heard; He also wanted a response. Humans are God’s first responders. The traffic across the bridge of divine discourse is therefore a two-way street. God speaks, humans hear, and then they offer back praise and worship. Interestingly, God declares His creation very good only after He has formed beings in His image. As I mentioned before, it may be that what takes the planet to this “very good” level are creatures capable of responding to His spoken word. God’s speech isn’t an algorithm for automatons but interlocution with an image bearer. Free will, therefore, becomes the choice between dialoguing with the divine or loving the sound of our own mutinous murmurings.

For my thoughts are not your thoughts,

neither are your ways my ways, declares the Lord.

For as the heavens are higher than the earth,

so are my ways higher than your ways

and my thoughts than your thoughts.

For as the rain and the snow come down from heaven

and do not return there but water the earth,

making it bring forth and sprout,

giving seed to the sower and bread to the eater,

so shall my word be that goes out from my mouth;

it shall not return to me empty,

but it shall accomplish that which I purpose,

What does the Bible mean when it states that God’s words shall not return to Him empty? Does He want to hear a transcript of His inaugural creation speech, or is He more interested in listening to the analysis of the human press corps? If He just wanted to hear an echo of His own words, He would have created an empty world with better acoustics, but instead He chose to fill it with sound-absorbing creatures capable of offering His words back in an astonishing array of human aesthetic. We have all engaged in divine word detailing, but sadly most of us fail to postmark our gifts back to God and end up hoarding His praise. Thinking we are collecting rare pieces of human genius, we end up bottling up the human response to the sacred. Instead of worshipping the Creator, we venerate the created, and our art exhibits become studios of self-adulation rather than galleries of godly gratitude.

When we return God’s words to Him, they can be in the form of worship, work, art, or education. When we think of all the ways humans make this planet unique, we quickly realize that when confronted by God’s words, we actually have a lot to say back. I believe that God created each of us unique so that when His voice goes out, the words we subsequently offer back to Him are uniquely embellished with our own personal interpretations of what He has said. He gives us a natural lexicon and then bids us to write Him a love letter; a cow becomes a latte, a tree becomes a boat, and a plant becomes a cure for cancer. Just like we love to see the world through our children’s eyes, I believe that God loves to see His world through our eyes.

In the beginning, God created … The first words of the Bible reveal a God who is at heart a Creator. He is a painter, potter, and performer. He hovered over His easel and raised His brush, and a dark canvas exploded in a big bang of Technicolor. He took a formless lump of clay, spun it on His potter’s wheel, and sculpted a planet. He spoke a majestic monologue into the empty void, and His voice returned a dialogue full of life. In order to make sure His symphonic soliloquy didn’t fall on deaf ears, He created beings equipped with divine voice recognition software. He filled the planet with image-bearing art patrons capable of creatively embellishing His divine words and returning them back to Him in a chorus of praise.

Beauty is in the eye of the beholder not because beauty is relative but because it is experienced uniquely by every being created in God’s image. He delights when image-bearing artists-in-training embellish His creative words and offer them back in a dizzying array of imaginative praise. Our individual responses to God’s world are like unique pieces of art adorning His Edenic sanctuary, adding inimitable optical nuance to the heavenly feng shui. As He walks the hallways, He sees familiar pieces of His own work embroidered with a distinctively human touch and smiles because He knows that imitation is the sincerest form of flattery.

The light God first called into being served as stage lighting for the unfolding universe, but once it lit upon His image-bearing prisms, it was refracted into a rainbow of praise. We have a choice: we can stand in the spotlight and take a bow, or we can offer back a performance of image-bearing wonder. We can let His spoken words pile up like junk mail at our doors, or we can artistically respond to every word, repackage it, and mark it “Return to Sender.”

I cannot conceive the necessity for God to love me, when I feel so clearly that even with human beings affection for me can only be a mistake. But I can easily imagine that he loves that perspective of creation, which can only be seen from the point where I am. (Simone Weil)

Studies consistently show that 90 percent of all people believe in a god of some sort or another. Spirituality, therefore, is not a demographic outlier but rather the statistically significant air we breathe. It is not a hobby for the scientifically illiterate but one of the basic elements in the periodic table of human experience. The real question before us then is not whether god exists, but rather, Who is this god in whom most people believe? We, therefore, need to begin our apologetic project by helping the majority identify their god rather than arguing with the minority about whether or not such a being exists.

Most people prefer to live with a hazy notion of spirituality because they don’t want a world where God is in control, yet they also don’t want to be forced to robotically dance to the tune of their selfish genes. A vague understanding of spirituality gives them a culturally acceptable opt-out clause from a dreary world ruled by chemicals while simultaneously allowing them to define the terms of divine engagement. We are united by the fact that we all have a spiritual hole in our lives, but it is the odd ways in which we fill it that divides us. All paths do not lead to the same God, but they do begin with the same spiritual void. It is here that our journey must begin.

In God Spoke, Dr. Strandness makes the case that our spiritual nature is the result of our hardwired human longing to rethink the thoughts of a God who has already spoken his mind. The divine discourse that fills the universe inspires us to bend our ears to hear his creational words, open our eyes to his written Word, and have our hearts transformed by his incarnate Word.

Erik Strandness, MD, MATh, practiced neonatal medicine for twenty years before his life was radically transformed by a passion to thoroughly understand his faith. He has a master’s degree in theology and is a fellow in the Colson Center for Christian Worldview. He currently practices neonatal medicine and serves as a Christian worldview educator in Spokane, Washington. Dr. Strandness is also the author of two other apologetic books, The Director’s Cut: Finding God’s Screenplay on the Cutting Room Floor, which was featured on, In the Market with Janet Parshall, and Cry of the Elephant Man: Listening for Man’s Voice above the Herd. You can visit his website at www.godsscreenplay.com.