Sewing Up Some Love 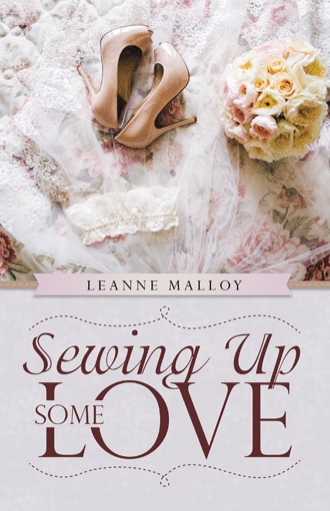 Despite herself, Lauren had a good time sharing her dinner with Doug. He seemed less egocentric than in the past, asking questions about her job and Jenny's upcoming wedding. She surprised herself by telling the story of designing Jenny's wedding gown and how it had helped her get past her lonely depression.

"I'm sorry you've been down, baby, and I admit I'm a part of that. You have to believe I would never be unfaithful again. It's not who I am anymore."

Lauren was about to tell Doug not to call her "baby" when the doorbell rang. Since Doug was ready to launch his rationale about why he was a new man worthy of a second chance, she welcomed the interruption. She was shocked to see Bryan at the door with two creamy, pink-tipped poinsettia plants. In contrast to Doug's sophisticated outfit, Bryan was dressed for the weather, wearing a black parka over faded jeans, and hiking boots.

"Uh, I thought I'd come by with these after you told me how much you liked them at dinner last night. But I see you're busy."

Doug's response was smooth. He acted genuinely pleased to meet Bryan. "Hey there, Bryan. Lauren didn't tell me she was seeing anyone else. She and I have quite a history and we were just catching up over her great cooking."

Bryan was equally pleasant. "Lauren and I are in my cousin's wedding on New Year's Day. So we've been thrown together a lot lately."

Thrown together? Evidently Bryan didn't think their dinner last night, complete with her revealing the pain Doug had caused her, meant anything more than filling his stomach.

Both men faked a chuckle and Bryan said his good-byes. After Bryan was out of earshot, Lauren looked at Doug with daggers.

"Could you have been more misleading? You implied we were getting back together!"

"So I do have some competition," Doug said smugly. "Believe me, Lauren, we have something real between us, and I'm not going to let Bryan ruin it."

"We have nothing between us, Doug. It's time for you to leave."

After Doug exited with a confident smile, the house was quiet. Lauren looked at the dirty dishes and half-eaten roast. So much for giving it to God. How was she going to deal with this mess? And she wasn't referring to her kitchen and dining room.

Bryan was livid. What was Lauren doing with the man she referred to with pain in her eyes each time she mentioned his name? They seemed very cozy; he had heard them talking quietly, almost intimately, as he approached Lauren's door. Her description of Doug's cheating must have been a lie, because he could never imagine her chatting with a man who betrayed her that way. And her subsequent depression must have been proof that she wasn't over him, despite her protests to the contrary.

Well, it was good that he knew, before he really fell for her. She wasn't the stable, grounded woman she appeared to be. Bryan had a sudden memory flash of a fight his parents had when he was around twelve years-old. They'd argued about Sally's friendship with a banker in town. At the time Bryan thought they would divorce, but within a few weeks, the atmosphere at home was calm again. Not that his parents were ever close, but they seemed to go back to their pattern of living separate, but amicable, lives.

Was there really such a thing as a happy marriage? His brother Jeff, and his wife Mandy, seemed to be good together, but they lived too far away to know for certain. Even Lauren's parents had a lot of trouble when her dad was laid off. That line of thinking eventually led Bryan to turn on the Colts game and have a supper of microwaved popcorn, while half-reclining on the couch.

"Doug Mathas sure had a better meal than this," he said aloud to the television. 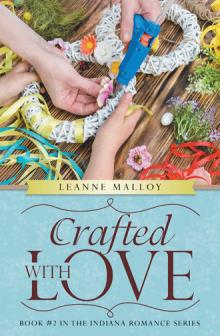 Lauren Gardner has been sewing, partly out of necessity, since her teens. Now the busy social worker supplements her income with her unique handmade clothing. Designing her best friend’s wedding gown, however, has been her hardest project to date. In addition, her cheating ex-fiancé, Doug, is back in town just as Lauren is becoming reacquainted with Bryan Dawson, a friend from high school. Juggling her growing attraction to Bryan, dealing with Doug’s manipulations, and meeting the challenges at work and at her beloved local food pantry are stretching Lauren to the limit. The usually composed counselor is implementing the anxiety-management techniques she advises her clients to use!

The flagship in Bryan’s family business, Mohr’s Department Store, is in desperate financial trouble. He wonders if Lauren’s designing talent could be the key to rebranding Mohr’s as a destination for women’s special occasion clothing. But Lauren bristles when she feels Bryan is courting her with the goal of using her to save the store. Other life complications are also in play for Lauren—a troubled young client is keeping secrets, the food pantry is at a crisis point, and a management shake-up results in a new supervisor with little regard for Lauren’s clinical work.

Bryan comes to realize that Lauren’s devotion to her family, friends, and profession makes her the most attractive woman he’s ever met. Her dark good looks don’t hurt either. As they work together to deal with their obstacles, will they discover that helping the one you love can create a team that will last forever?

Leanne Malloy worked as a psychologist for over twenty-five years. She writes with a firm belief in God’s love, grace, and provision. Leanne and her husband live in Indiana, near their daughter and grand-dog. A homebody at heart, her life is full as long as there are family and friends in frequent contact, opportunities to travel, and books to be written.