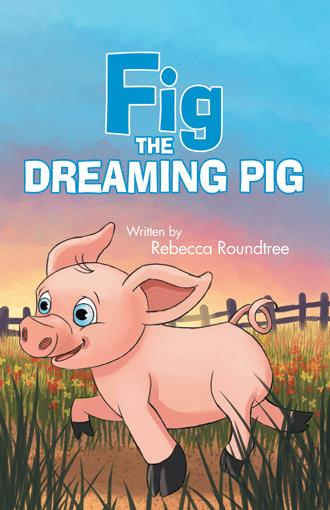 Chapter 1
Have you ever heard of the pig who dreams of running in a race? His name is Fig, and he is eight years old. Fig lives on a farm in Woodpine Hollow with his mom, dad, and sister, Amelia. Every spring when the Annual Race of Champions comes to town, Fig wishes he was in the race. If only Fig had running shoes, then he could be in the race. But that hasn’t happened yet. You see, Fig’s left foot is twice as large as his other feet. No store has shoes in his size! This hasn’t discouraged Fig, though. He still believes that someday he will find the perfect shoes.
One Saturday morning, Fig and his sister Amelia are outside watching their friends practice for the race. Fig is chosen to be the official referee. His favorite part is saying, “On your marks, get set, go!” As he kept watching everyone having fun, Fig looked at Amelia and said, “Gosh, I really wish I could be in the race, too.”
“I heard there is a new shoe store opening in Hopeville this weekend. Maybe someone there can help you,” Amelia suggested.
Fig’s eyes brightened as he replied, “That’s a great idea! I’ll go there tomorrow.” The next day Fig went to Hopeville in search of new shoes. When he got there, he saw a sign for the grand opening of Cappo’s Shoe Store. Balloons and streamers were everywhere! As Fig walked inside, he heard a voice say, “Welcome to Cappo’s Shoe Store! What can I do for you?”
Fig turned around and saw a horse standing behind the counter. It was Cappo himself. Fig had never before seen a horse so tall. Cappo stood as high as seventeen hands put together!
“Hi, my name is Fig and I need some running shoes. Can you help me?” he asked.
“Sure,” Cappo answered. “Let’s see what we can do.” Cappo looked behind the counter for some tape, a pencil, a ruler, and a sheet of paper. He measured all four of Fig’s feet and started drawing many different styles.
“I’m going to be in the Annual Race of Champions in two months, and I’ll have to start practicing soon,” Fig stated. “When do you think my shoes will be ready?” He was sure Cappo would laugh at him, but Cappo didn’t laugh at all.
“That sounds very exciting,” Cappo responded. “Your shoes should be ready in one week. Then you can start practicing for the big day.”
Fig smiled and said, “That’s great! I’ll be back next week.” After he told Cappo goodbye, Fig hurried home to tell his family the good news. As Fig walked out of the store he saw Conrad standing across the street. Conrad is a pig who always makes fun of Fig’s foot.
All of a sudden, Fig heard Conrad shouting, “Hey everyone, look at the biggest foot in the world! Watch out or he may step on you!” Then Conrad started singing, “Fig, Fig, your foot is so big! Fig, Fig, the funny looking pig!” Fig ignored Conrad and kept walking, but that didn’t stop Conrad from singing even louder! Fig began to feel embarrassed and sad. However, instead of fighting with Conrad, Fig decided to take a deep breath, count to ten, and keep walking.

When Fig got back home, he told Amelia about meeting Cappo.
“I’m so happy for you,” Amelia said. “That is just wonderful news!” Fig also told her about Conrad’s mean song. Then his eyes filled up with tears.
“Maybe if I looked different, no one would make fun of me,” Fig cried.
Amelia tried to encourage her little brother as she said, “Always remember that you are special to God. He loves everything about you and has great plans for you.” Fig wiped away his tears and thanked his sister for being so nice.
Amelia happened to look at her watch and said, “Oh goodness, it’s four o’ clock! It’s almost time for church and Mr. Tom will be speaking soon. We better go now so we’re not late.”
“Okay, let’s go,” Fig said excitedly.
Everyone always looked forward to hearing what Mr. Tom had to say. Mr. Tom is a horse who is owned by the local pastor, and he enjoys encouraging the other animals. Everyone was gathered underneath the big maple tree near the church waiting expectantly for Mr. Tom’s arrival.
“Hello and welcome,” Mr. Tom said as he greeted everyone. “Today I want to talk about forgiveness. Can anyone tell me what forgiveness means?” All the animals looked around at each other, but no one spoke.
“Is forgiveness when we choose not to be mad at someone anymore?” Amelia asked.
Nodding his head, Mr. Tom answered, “That’s correct, Amelia.” Then he asked everyone, “Have any of you ever been mad at someone who hurt your feelings?”
Fig replied, “I have.”
“Me too,” others said.
Looking at the crowd, Mr. Tom asked, “Are any of you still mad at someone?” No one said a word. “Well, today I want to talk about asking God to help you forgive.”
After church was over, Fig told Mr. Tom about Conrad making fun of him. Mr. Tom reassured Fig that it is normal to not like being teased. He also encouraged Fig to ask God to help him forgive Conrad. Fig began to understand that he needs to forgive others just the way God forgives him. Something special happens when a heart forgives, and Fig’s heart was already starting to feel different.
Mr. Tom could tell Fig needed some more encouragement, so he said, “Always remember that God made you unique and He loves you very much. Did you know that no one else has the same footprints as you?”
Fig quickly looked at his four feet and said, “I never thought about it that way. That’s really neat! Thank you for listening to me, Mr. Tom.”

When Fig the pig hears that the annual race is coming to town again, his heart wishes he could be part of it. If only he had running shoes that fit his oversized left foot. Determined to find a way of making his dream come true and be in the race, Fig begins a search for new shoes. Will Fig’s dream ever come true? Join author Rebecca Roundtree for some valuable lessons about faith, perseverance, self-esteem, and forgiveness in Fig the Dreaming Pig, the story of a pig who never gave up!

Rebecca Roundtree lives in Metairie, Louisiana where she enjoys spending time with family and friends. Rebecca also enjoys being a sponsor with the Christian Child Advocacy Ministry, Compassion International. She attributes her imagination to a desire to live by childlike faith and seeks to offer hope and encouragement to others through her writing.