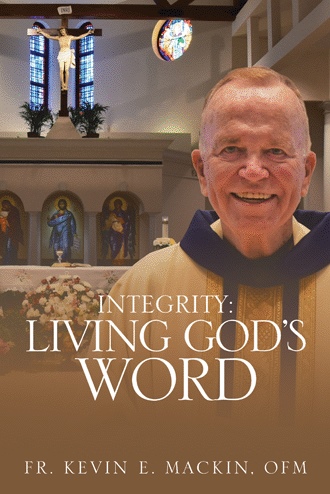 from Fifth Sunday of Easter:
Many of us as youngsters had to memorize lines from Shakespeare's plays. Lines such as: “to thine own self be true”; or “all the world's a stage, and all the men and women are merely players: and one man in his time plays many parts, his acts being seven ages:” from infant to schoolboy and so forth.
Someone compared the seven ages to seven stages of prayer: At 20 we pray we will wake up romantic; at 30 we pray we will wake up married; at 40 we pray we will wake up successful; at 50 we pray we will wake up rich; at 60 we pray we will wake up contented; at 70 we pray we will wake up healthy; and at 80 we pray that we will wake up. How many can relate?
The word of God takes us back to the first missionary journey of Paul and Barnabas (Acts 14:21-27). They proclaimed the good news about the Risen Christ, made disciples of many despite threats to their own lives, encouraged these new disciples to stay true to their faith, established structures and went back to report what God had done. The circle of disciples gets bigger and bigger, going from the Jews to the Gentiles.
Paul and Barnabas challenge us to live lives of integrity. They didn't compartmentalize their lives: for example, Sunday we involve God; Monday through Friday we exclude God. Our personal and professional lives form a single whole life. We are called to live and act with integrity wherever we are and whatever our profession and relationships.
Life can't be divided into compartments. That was the “Titanic's mistake.” When the Titanic set sail in 1912, it was declared “unsinkable.” The ship's hull was divided into 16 watertight compart-ments. Tragically, the Titanic sank. When the wreck was found in 1985, what they discovered was that damage to one compartment affected all the rest.
Many people make the “Titanic mistake.” But a person who tries to live a life of integrity, honesty and truthfulness doesn't divide his/her life into compartments. We try always to be true to our inner best selves.
The author of the Acts may be asking whether we, like Paul and Barnabas, try to live lives of integrity.
In the Book of Revelation, the author describes a visionary experience of the future in which he sees a new heaven and a new earth, a new Jerusalem, a universe in which we will experience the presence or glory of God. God will live in us and we will live in God. (Rv 21:1-5)
The author may be asking whether we're aware of God's presence in our lives.
The Gospel according to John takes us back to the farewell address of Jesus. (Jn 13:31-35) Judas, the betrayer, has left the Passover meal. The die is cast: the arrest, trial and execution are about to begin. The death/exaltation is near. Yes, Jesus will be lifted up on the cross, only to be lifted up into glory. And his message: love one another with the same self-sacrificing love I have shown you.
During this Easter season we meet different biblical personalities: the questioning Thomas, the impulsive Peter, the purpose-driven Paul.
Today I would like to highlight Mary Magdalene or Mary of Magdala. Mary is depicted in literature as a repentant prostitute; Daniel Brown's novel The DaVinci Code depicts her as Jesus' wife. But Mary Magdalene was neither. She was from Magdala, near the Sea of Galilee. Only Luke's Gospel describes how Jesus exorcised Mary from seven demons. Tradition associates these demons with the seven deadly or capital sins: pride, avarice, gluttony, lust, jealousy, laziness and anger. The great thirteenth century Italian poet Dante Aligheri describes these deadly attitudes in the concentric circles of the Inferno in his classic “The Divine Comedy.” So too does the English storyteller Chaucer in The Canterbury Tales. Their opposite are the seven heavenly virtues: living a life of dependency upon God, generosity, self-discipline, a chaste life, a simple life, a work ethic and forgiveness.
Mary Magdalene and other biblical women supported Jesus. She was at the crucifixion; she was the first witness of the empty tomb; she was the first to recognize Jesus in the garden. She is called “The apostle to the Apostles” because she rushed to tell them the good news.
Mary Magdalene is a model of discipleship....

When the living Christ communicates his life to us, this bread we eat and this cup we drink from should not only form us into a community of deeper faith but also should empower us to reach out compassionately to the people around us. Yes, the Eucharist is a going forth. We must go from the church to “wash the feet” of our brothers and sisters in daily life. In giving ourselves to others, we will live God’s Word and act with integrity wherever we are and whatever our profession and relationships are. This collection of homilies by Fr. Kevin E. Mackin, OFM, reflects on living God’s Word with integrity.

A priest in the Order of Friars Minor, Province of the Most Holy Name of Jesus, Fr. Kevin was born in Brooklyn, N.Y. He served at Siena College in the 1970s as an assistant and associate professor and chair of religious studies. In 1982, he was appointed president-rector of Christ the King Seminary, a graduate theological school in East Aurora, N.Y. He was assigned in 1988 to direct development/public relations for his Franciscan Province. From 1996 to 2007, he was president of Siena College and is President Emeritus. While president of Mount Saint Mary College in Newburgh, N.Y., from 2008-2014, he also served as Professor of Religious Studies. He has taught Christian Theological Tradition, Catholic Tradition, Intro to Biblical Studies, Modern Search for Jesus, Contemporary Catholic Thought, Contemporary Protestant Thought, and The Gospels. He has also published numerous articles and books including A Spirituality for Sunday People (WestBow Press, 2017).