From Ashes to Glory

THE TRUE STORY OF A FORMER MUSLIM FROM IRAN

by Ramin Parsa & With Nonie Darwish 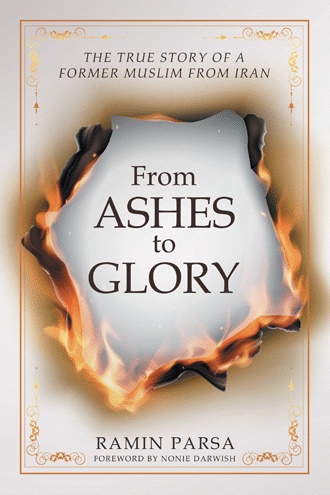 Amidst fleeting episodes of quiet enjoyment with family, outside the walls of our home, the government went about its sordid business of using Islam to bring society to its heels. Public displays of Islamic practices ruled the day as the entire country became rabidly religious. I would see people on the streets beating their chests and shoulders to mourn their deceased religious leaders that were killed by other Muslims centuries ago. Wailing mourners were touted as “holier,” especially those who wounded their heads with daggers and swords.

In From Ashes To Glory, Ramin Parsa, a former devout Muslim describes his supernatural encounter with Jesus Christ that consequently led to his dramatic conversion from Islam to Christianity after he learned that Jesus Christ died for him on the Cross, was buried and rose from the dead on the third day. Ramin describes life under rigid Islamic sharia law in Iran which he once thought was the way to Allah. Until he became a victim of the unjust Islamic law himself which devastated his life. That caused him to investigate Islam more closely which resulted in discovering devastating truth about Islam that caused him to reject and abandon Islam entirely. Leaving Islam was not easy for Ramin because his entire life he endeavored to please Allah through keeping harsh Islamic laws and rituals. Although Ramin left Islam, but he couldn’t ignore the fact that there is a God. His hunger for truth sat him on an exciting journey that led him to find the only true and living God whom he never knew but was desperately seeking. In this engaging and thought provoking book, with depth and clarity, Ramin compares Islam vs. Christianity and their respective impacts on the world around us. This book reminds us to take heart because the simple but powerful message of the Gospel is healing and transforming the lives of people everywhere including the Muslim world. In this book you will learn about Ramin’s story, his dramatic escape from Iran, living as a refugee. You will also learn about the rise and fall of Ancient Persia, the birth of Islam and its dark History, the truth about the Islamic sharia law, Islamic Jihad and the plan of Islam for the West. Redemptive Love Ministry International P.O. Box 2595, LANCASTER, CALIFORNIA 93539 www.raminparsa.org info@raminparsa.org Phone:1-805419-0177

Ramin Parsa was born and raised in Iran as a devout Muslim. Ramin Parsa's dire search for Allah fueled his stringent practice of Islam. However, a series of events and revelations led him to doubt and ultimately reject the harsh, unjust, and empty religious practices and teachings of Islam that he had embraced since childhood.

Disillusioned and deeply troubled, Ramin questioned his own life’s meaning and purpose, and contemplated suicide.

Ramin was 19 when he first heard and accepted the gospel of Jesus Christ, which transformed his life. Immediately after, he felt the call to pursue and serve the God of the Bible in a meaningful way.

From Glory to Ashes and From Ashes to Glory beautifully recounts Ramin’s unassailable faith journey. This book speaks to how a man’s faith, identity and reason for being were diminished to ashes, but restored and raised up by God to a different kind of glory.

Ramin shares jarring details of the severe persecution he has endured since becoming a Christian, and the price that Christians continue to pay for living out their faith in dangerous Muslim-majority countries.

In his book, Ramin courageously unveils the true face of Islam and its oppressive mindset and culture in stark details. You will learn about his first-hand experience with the disquieting realities of Sharia Law and Jihad. this book is as much a powerful testimonial as it is an urgent plea for resistance against the Islamic invasion of the West, and for protection of the Judeo-Christian freedoms and principles that we love and cherish in America.

comparing and contrasting the world impacts of Islam and Christianity over millennia, Ramin makes the case that Christianity is the only demonstrable solution to humanity’s ills.This story attests to the living hope and restoration that humanity can only find in Jesus Christ.

This book is an invaluable tool that provides insight into the hearts and minds of Muslims and lays out practical advice for reaching out to them in Christ’s love.

Your hearts will be stirred and your passion for the Gospel re-ignited by Ramin’s story of hope and redemption.

Ramin Parsa is a world-traveling evangelist, Bible teacher, and pastor of The Good Shepherd Church in Southern California, where he currently lives.