An Unconventional Love Letter to the LGBTQ Community

Redefining Love. Exposing the True Enemy. My Journey to Freedom

by Jessica A. Newsome 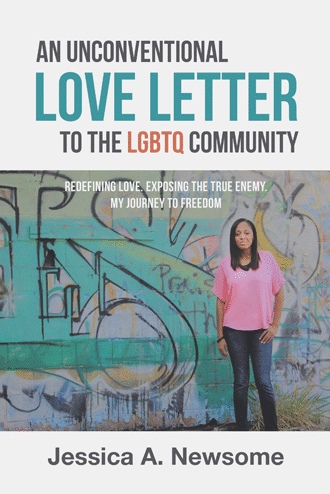 Many in the body of Christ have strayed from one of the most important characteristics of our Father: love. One person’s hate and condemnation will never bring another to a place of genuine repentance and desire for God. Too often, this approach is used in an attempt to do just that, and it doesn’t work. Treating people as outsiders, or lesser than oneself because they are different, is not Christ-like.

What about the woman at the well (John 4)? Not only did the Jews look down on her because she was a Samaritan, she was also an outcast because she had been married five times and was living with a man who was not her husband. What did Jesus do when He encountered this woman? He showed her love. In spite of her wrong thinking and sinful life, He offered her something that would finally quench her thirst, filling her with wholeness, genuine love, and salvation through Christ Jesus. He showed her a new way that would lead to true happiness, fulfillment, and an eternity in Heaven.

What about Rahab (Joshua 2)? She was a prostitute and everyone knew it, but God looked past her sins and saw her moldable heart. Jesus had mercy on the lost and hurting. He met them right where they were. It was those who were in desperate need who came to Jesus—messed up, sinful, confused, and lost—and He delivered them.

It is in those moments of crying out to Jesus that the blinders Satan has placed on our eyes begin to fall away. In the movie The Matrix, Keanu Reeves’s character Neo was given a choice: he could take one pill and wake up to everything being just the way it was before he met the individuals offering him freedom, and his world would go on exactly as he had perceived it before he was offered the truth or reality. But he could also choose the alternate and wake up. He would become aware that the world, which he had perceived to be reality, was in fact, a false reality that forces beyond his current comprehension wanted him to believe was truth. If he chose to wake up, life would never be the same. This is what it’s like to walk with Jesus. If we choose to follow Him, believing in our hearts and professing with our lips that He is the Savior and Lord over our lives, He begins the process of opening our eyes to the truth, and life as we know it is forever changed.

As I lay in my dream state, paralyzed, and unable to speak or move yet knowing what was going on in the natural, I tried my best to say, “Jesus.” As I fought for words, and before I could get his name out, I felt something like a wave go through my body that came from the demonic spirit. Right after that happened, I got the name of “Jesus” out of my mouth. Immediately, the paralysis broke, and I was able to move.

It is uncomfortable for many to speak about the things that go bump in the night. We would like to believe that Satan and his demons do not exist or that because one may follow Christ, demonic attacks do not exist in our lives, but that is not true. In order to overcome the things that plague us, we must know what we are facing and how to become an overcomer.

This book will walk you through my personal experiences and struggles:

Jessica Newsome, founder of Love at the Cross Ministries (www.loveatthecross.com), seeks to share the love of Christ and his delivering power from strongholds through her testimony of having been set free from homosexuality. Graduating from University of Maryland Eastern Shore in 2006, she continued her education there and completed two years in a masters program before entering the workforce. After six years in federal law enforcement, Jessica began full-time ministry with her local church.