A Summer to Remember 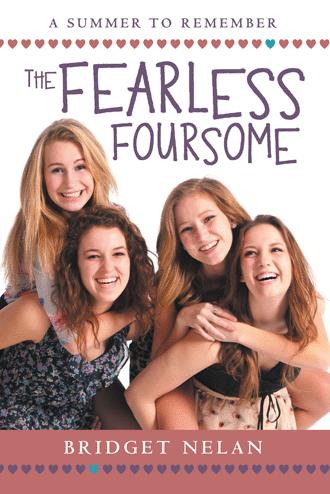 “Okay. You can tell me all about your first Fearless Foursome outing in the morning. I’ll pick you up about nine, after I drop your brother off at soccer. Thanks for calling and letting me know I can trust you.”

Ouch. Sara was glad she was in the bathroom because she suddenly felt sick to her stomach.

“You okay, Sara?” Ella asked as she returned to the porch. “You look kind of pale.”

“I don’t feel too hot,” Sara said. “Maybe you guys should go without me.”

“Not a chance, party pooper!” Laurel retorted. “We’re in this together. No wimping out. You can be in you sleeping bag by 12:30 a.m. if you need your beauty sleep.”

“Exactly! Just responding to their dare will show the Warriors what we’re made of,” Ella added.

The girls passed the next fifty minutes doing makeovers.

The neighbor’s dog barked, but he was known for barking at everything from cars to mosquitoes. No lights came on as they stared at the dark houses. Once they reached the corner, they picked up the pace, adrenaline pumping.

“Oh, what about umbrellas?” Sara said, nearly tripping as she stopped.

At least I know Ella and I are still thinking alike,” Sara thought.

Sara and Ella were back in minutes with the one umbrella they could find.

“Since I brought the makeup, I get the umbrella if it rains,” Laurel instructed.

Hearts pounding from anticipation and fear, the girls jogged the rest of the way to Laramie Park. The entrance to the park was narrow and heavily wooded. The silence was almost as loud as the crickets. The Fearless Foursome passed the playground and wound their way back to the pool.

Except for the reflection on the crystal clear water from the poolhouse spotlight, it was pitch black. No Warriors.

“I can’t believe they stood us up,” Laurel whined.

“Shhh. I think I hear something,” Adalynn whispered. “Maybe it’s them.”

Surely no one else was stupid enough to stand outside a fenced-in pool at midnight with a big storm brewing, Sara thought.

As they held their breath, three figures emerged out of the darkness from behind the concession stand - Luke, Matt, and Kyle - the heartthrobs of their grade. This was worth every bead of sweat.

“Hey, girls, how was your pizza?” Kyle said with a big grin, smiling at Laurel.

“Just fine,” Laurel said, taking a few steps to be sure she was standing where the light was shining on her. “How’d you pull off the note-in-the-pizza-box trick?” Laurel asked, crossing her arms.

“My brother works at our uncle’s pizza joint, Delaney’s,” Matt said with a smile. “We were helping out tonight because they got swamped with deliveries and needed some extra hands. I took the call from Mrs. Taylor and heard you girls in the background. Looking back, it was probably a stupid thing to do because Ella’s parents could have found the note. I take it they didn’t?”

“No, no, it wasn’t a stupid thing to do. Well, it probably was, but what I mean is that we’re glad you did it. And, no, we were the only ones who opened the pizza,” Sara said, fumbling over her words.

“You girls up for some fun?” Luke asked.

“Crazy enough to go for a midnight swim on an eerie night,” Luke added proudly.

“Actually, we just came to say hello and need to head back to the Taylor’s soon,” Sara spoke up.

“We want to beat the storm,” Adalynn said. “We may not even make it back before it rains. The sky looks weird.”

“We wanted to live up to our name, so we decided to respond to your request,” Laurel said flirtatiously.

“We thought for sure you’d chicken out,” Luke said, “especially with the storm coming. We’re glad you didn’t.”

Why did she melt every time he spoke? Sara felt her face getting hot again and wondered if anyone could tell.

Laurel interrupted the stare and said, “Maybe the guys are right. Let’s just take a little dip. You must’ve been ready to get wet, Sara, with that silly umbrella you’re carrying.”

Who was this popular girl, Laurel, anyway? Sara thought. Why did everybody think she was so cool? She was the one who wanted the umbrella if it rained! The rose in her cheeks darkened with anger and embarrassment. “I’m heading back, alone if I have to,” Sara responded coolly.

The sky lit up with a flash of lightning and a deep rumble of thunder from the west.

The Fearless Foursome tells the story of four young teenage girls who start their summer break with the formation of a new club. Their first adventure is a sleepover that turns into a night of trouble when they sneak out to meet a group of boys. A complex chain of events begins when one of them is involved in a serious accident.

The main character, Sara Hawthorne, learns some valuable lessons over the summer about friendship, trust, and honesty. In the midst of a web of friendship issues, a boy named Matt Thompson enters the picture and captures Sara’s heart.

This fast-paced novel grabs the reader until the turn of the last page.

Bridget Nelan became a freelance writer after fifteen years in the financial services industry. She has written dozens of articles for various publications and the book, God’s Handprints: A Story of Faith, Hope, and Love. Bridget lives in Germantown Hills, Illinois with her husband Mark, and sons, Joe and Jake.