Should Women Be Pastors and Leaders in Church?

My Journey to Discover What the Bible Says About Gender Roles 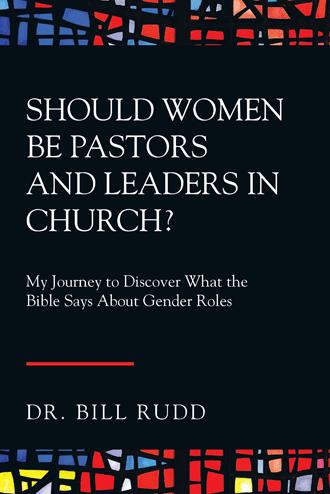 From the Introduction (page 1)

This book is about a journey—a very personal journey. It’s about my journey to discover what the Bible teaches about gender roles—primarily in the church, but incidentally, though no less important, in marriage. Why I went on that journey, how it unfolded, and where it led me—those subjects fill the pages of this book. The journey has been wonderful and terrible. It has been fun and gut-wrenching. It has been challenging and rewarding. It has brought me grief and given me hope.

Even if you’re totally convinced that you already know what the Bible says and would never change your mind, I really hope you’ll join me on this journey. Perhaps you’ll enjoy some of my stories. Perhaps you’ll be surprised by what you read. Perhaps you’ll be shocked, as I was, by some of the things I discovered in the Bible. Perhaps you’ll be challenged to think Biblically in ways you did not anticipate. After all, a closed mind is a dangerous thing. If you love God and the Scriptures, whether or not you agree at every point, I believe that you will appreciate how seriously and reverently I have attempted to unpack what the Bible actually teaches on this crucial topic.

Beginning at the beginning is a good thing. Therefore, turning to the opening chapters of Genesis to search out God’s intention for His creation is an essential starting point.

The significance of the themes introduced in the opening chapters of the Bible (Gen. 1-2) is elevated by the realization that many of them will reach their fruition in the new creation as beautifully portrayed in the concluding chapters of the Bible (Rev. 21-22). These Genesis/Revelation themes are like beautiful bookends for God’s unfolding story which develops between.

The answers to three questions are foundational in order to construct a Biblical view of gender roles in the home, church, and society today:

• What was God’s original intention for gender roles as revealed in the Gen. 1 and 2 accounts of Creation?

• What was the subsequent impact of the Fall described in Gen. 3?

• How are gender roles portrayed in their future actualization in the New Creation?

The two primary passages used to teach male authority over women and consequent female role restrictions in the church are 1 Cor. 14:33–40 and 1 Tim. 2:11–15. Without these two passages the hierarchical position in the church gender role debate would be greatly diminished or more probably would disappear. Unfortunately, the unclear and/or misleading way these passages are translated in most English Bible versions has exerted huge influence on their interpretation as well as on how other Scriptures have been understood and applied. The complementarian position in the Western church hangs on a slender thread of how four Greek words have been translated into English.

How one understands these two passages is really the tipping point in the gender roles discussion. These are control texts. All of the Bible is inspired, but there are some Bible passages which dominate the formulation of our beliefs and practices and influence our understanding of the rest of the Bible.

The following three observations suggest that gender restrictions in the church cannot be supported by the two key gender role passages when they are properly understood. Each will be carefully unpacked.

(1) If one assumes that the Scriptures, rightly interpreted, do not contradict each other, then comparing these key Scriptures with other Biblical passages makes it clear that they cannot possibly be understood as an absolute prohibition of women from speaking or from teaching men in the church.

(2) In these passages and their contexts, distinguishing between what was addressed to first century local issues and what was intended to be universally applied beyond the first century significantly impacts how they should be interpreted and substantially undermines using them as timeless requirements for gender hierarchy in the church.

(3) Correcting or enhancing the inadequate, misleading, or incorrect English translations of key Greek words in the two primary prohibition passages absolutely undermines the traditional complementarian understanding. A clear and correct translation of key Greek words erodes support for traditional gender restrictions in the church as well as brings the passages into harmony with the themes of their immediate and extended contexts. These corrections or improvements in translation support an egalitarian rather than a complementarian position.

In anticipation of that more exhaustive discussion, perhaps it would be helpful to preview the implications of a corrected translation of haysuxia in 1 Tim. 2. Used three times in the chapter (2:2, 11, 12), haysuxia means “quiet,” not in a verbal or auditory sense as in the absence of talking or sound, but in a peaceful and tranquil sense as in the absence of conflict, fighting, argument, or debate. This meaning of haysuxia is patently obvious and indisputable in 1 Tim. 2:1, 2: “I urge, then, first of all, that requests, prayers, intercession and thanksgiving be made for everyone—for kings and all those in authority, that we may live peaceful and quiet [haysucion] lives in all godliness and holiness.”

Without question, Paul is not asking for intercessory prayer on behalf of kings and rulers so that God’s people can live in verbal silence. That would be ludicrous! His call for prayer was so that they could live in a state of tranquility and serenity, free of war, conflict, disruption, and persecution. This indisputable meaning of haysucion in verse 2 strongly suggests what its meaning should be only a few lines later in the same chapter. In verses 11 and 12 Paul does not call on women to not talk or to not teach men, but rather he commands them to not be argumentative and disruptive—to not disrupt the peaceful calm (haysuxia) in the church by the manner in which they learn, lead, and teach. Paul’s goal was not silent women, but rather was peaceable women who contributed to an orderly and conflict-free atmosphere for worship.

What if you had been deceived about an important Bible teaching that has huge impact on peoples’ openness to the gospel and on the reputation of Jesus’s church? Would you want to know?

What if your church could double the number of teachers and leaders and experience revitalization by implementing one Bible teaching? Would you want to know how?

An interpretive key with transformative potential for every marriage

How a major emphasis of scripture has been stifled or ignored

How to implement a game-changing Bible truth in your church

Dr. Bill Rudd has been a pastor in four churches for a half-century. He has been an adjunct professor in two seminaries. He has spent years intensively studying the Bible regarding gender roles. In retirement he serves as a consultant, does pulpit supply, is a workplace chaplain, and is a joint-founder of Pastor Partner, an organization facilitating retired pastors serving alongside solo pastors. He is Pastor Emeritus at Calvary Church in Muskegon, MI, where he served for 32 years. He and Gloria have been married for over 50 years. They have four children and ten grandchildren. www.pastorbillrudd.com