A Sufferer of a Cruel Degenerative Condition Finds Her Voice 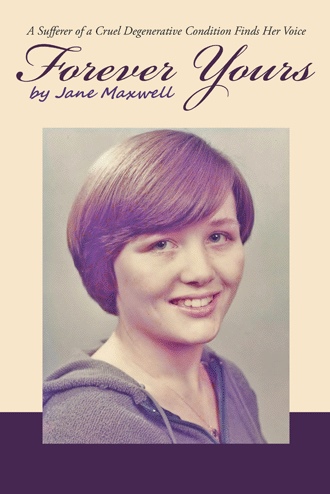 Forever Yours is based on my life story as I remember it. I thought it might be encouraging to people with progressive conditions and maybe interesting to others. I would like to dedicate it to my darling, longsuffering husband, Alan, without whom I wouldn’t even be here at all. I am very grateful to Helen Day, my speech therapist, who devised a method by which I can write, using assistive technology (the Grid 2).

It was a cold, wet February evening in 1969. Thirteen-year-old Jane had spent most of the day watching ambulances being unloaded in the courtyard below. She wondered about the people on the stretchers. Had they been in an accident? Or, like her, were they there to undergo tests and for observation?

Although she was on the fifth or sixth floor, Jane occasionally thought she saw a covered stretcher, presumably carrying a dead body. Jane had always had a morbid fear of being buried alive, ever since she’d seen a recent Sherlock Holmes episode on TV in which a woman was drugged and placed in a coffin on top of a corpse. Jane also had a morbid curiosity about morgues, and when she put this together with how she enjoyed her dad giving her spoonfuls of blood from the Sunday roast, she amused herself with the thought that she had in fact been a vampire in a previous existence!

Jane’s parents had brought her to the hospital about a week before for tests to try to find out why she had become so unsteady. She’d been to see a couple of consultants earlier, and an orthopaedic surgeon had referred her to Great Ormond Street because they thought her problems might be neurological.

Jane enjoyed all the tests, except the EEG (or brain wave test), which involved attaching electrodes all over the head with a most unpleasant sticky substance which messed up her hair.

Originally, Jane had been admitted to a children’s neurological ward, but because all the other children were so young, she had been given a private room.

At 13, Jane was already becoming a woman. She was beginning to develop physically. In fact, one of her first periods had arrived during this hospital stay, which was very embarrassing for her. Jane loved reading romantic stories and was starting to dream about becoming an actress (or perhaps a brain surgeon!), and about boys, falling in love, getting married, and having children of her own. All of this made what was to happen next all the more cruel.

It was already dark when Jane’s consultant and his registrar came into the room with her parents. She had had no tests for several days as they were working out a diagnosis. The doctors had obviously told her parents about it already. It was not good news. Jane could see that immediately. When the consultant spoke to her, everyone else looked at their feet. “I’m afraid you’ll never walk again,” he said, “and you may only live for another three years.”

Jane was absolutely devastated, and all of her dreams were shattered in a single moment.

Having been effectively silenced by her illness for many years, Jane’s ability to communicate was restored in 2011, through technological advances that enabled her to ‘speak’ via a computer, using very slight movements of her chin. The assistive technology Jane received changed her life dramatically and gave her real hope for the final five years of her life. Being able to communicate again in writing, after so many years, meant everything to Jane. In the midst of losing her voice, her hearing, and the use of her arms and hands, Jane decided to write a memoir: her story, in her own words. Forever Yours had been the inscription Jane and her husband Alan had chosen for their engagement rings back in 1977. Jane’s book was to be “a love story but with a twist”. Together, and in faith, Jane and Alan were to learn that the deepest joy can come from the darkest of places, including in times of trial and pain.

Jane Maxwell suffered from a progressive neurological condition known as Friedreich’s ataxia. Unable to walk and confined to a wheelchair as a teenager, her condition worsened, slowly but cruelly, as each year passed. In spite of her problems, Jane graduated from university, married, had a baby, and travelled the world. The painstakingly slow nature of the deterioration, over decades, made each successive loss all the more devastating as Jane’s ability to walk, stand, dress, wash, push her own wheelchair, hold a pen or cup, type, feed herself, speak, hear and communicate all went in turn. Losing speech and hearing were, for Jane, the most isolating and distressing symptoms of all.