And Its Scientific and Rational Pretensions 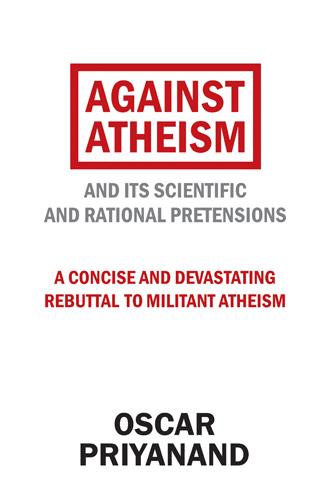 Trivialize and dismiss is the modus operandi of the militant atheists. This should be very obvious to anyone who cares to read their books or watch their debates. Their strident smart talk and rational pretensions have a following whose numbers are unfortunately increasing. Aided by vitriolic debates and books of the four horsemen of militant atheism—Richard Dawkins, Daniel Dennett, Sam Harris, and late Christopher Hitchens—they are becoming more vocal by the day.

Historically, atheism has always been lame and puerile—not that it is any more potent today—but what makes this new kid on the block different is its scientific and rational pretensions. To the extent that all their books and websites are more about science, its methodology, and its progress rather than about atheism itself. Science is one red herring that they use very effectively in their debates and books.

So far, the theistic response has been mainly from the Abrahamic religions with Christianity on the forefront. This itself is a remarkable testimony of Christianity, that it can be defended even in this age of science and reason. Prior to the rise of militant atheism, the Christian response to atheism has been from Christian apologists like Norman Geisler and C. S. Lewis. But these days many more have taken the onus of responding to militant atheism. Those on the forefront are William Lane Craig, Ravi Zacharias, Alvin Plantinga, Frank Turek, and Dinesh D’souza in the Americas and John Polkinghorne, John Lennox, Richard Swinburne, Alister McGrath, and Keith Ward in the United Kingdom. The defence of frontline apologists has been Christian in word and spirit. Unfortunately, our meekness and forbearance have been perceived as a weakness. It is time to put to rest any such misconceptions the atheists may be having.

The word “Apologetics” is a derivative of the Greek word apologia, which means a verbal defence. Christian Apologetics began in the first century of Christianity to defend its faith and rebut older mythical conceptions of God. Among the different religions today, Christianity is unique in its claim to have a cohesive worldview which at the same time is open to scrutiny and criticism—compared to Islam that allows no room for introspection or criticism whereas most polytheistic religions are too vague and incoherent to be defined and scrutinized.

We will take a radically different approach in Christian Apologetics. Instead of defending theism, we will go on a counter-offensive against atheism in this book, a antepíthesi (Greek for counter-offensive) of sorts. Instead of using traditional arguments to defend the existence of God—except for the Cosmological Argument which we will use briefly in the beginning—we will go on the offensive and show how unscientific and irrational the atheistic worldview is. In the end, even if this book does not convince you to be a Bible-thumping believer, it will make it impossible for you to be an atheist.

This book will argue that science and rationality have its origins in a Christian theistic worldview and that the evidence from science for a Creator God is simply overwhelming. We will also make a strong case that both atheism and science have nothing to do with morality. In the absence of a moral compass, science needs religion—specifically Christianity—more than ever to give it a direction. We will also briefly show why Christianity is unique among all the religions of the world and make a strong case that it alone can provide the rational foundation for peaceful and tolerant nations.

If there was a single event that pushed me to write this book, then it was the Oxford Union debate on November 8, 2014 to defend the proposition: “This house believes in God.” But unfortunately, they did not have the right people defending this proposition except for John Lennox, professor of Mathematics and Philosophy at the University of Oxford, while the atheistic side had their best representatives in Dan Barker, Michael Shermer, and Peter Millican. I wonder why the best in theistic defence like Norman Geisler, Frank Turek, William Lane Craig, and Ravi Zacharias were not invited to the debate. Needless to say, the proposition failed to pass even when the atheistic defence was mediocre at its best. Although this whole book is a rebuttal of what they have said during that debate, the last chapter (If I were in Oxford on that day) contains what I would have said if I were around on that day. If you are hard pressed for time, this chapter along with the summaries at the end of each chapter will give you a good overview of the entire book.

This book is written with extreme urgency and as such its tone may be straight forward to the point of being rude. Suffice it to say that the arguments will be presented without any sugar-coating. But if anyone thinks we are being overly blunt, then they should flip through a few pages of books written by the militant atheists to see the scorn and contempt they have for God and religion. It is high time we returned those compliments. I strongly believe that in our quest for truth, we should keep all etiquette aside.

This book is also intended to be short and concise for the sake of today’s generation. Our concern for them is paramount. They are the ones who are most vulnerable to the scientific and rational pretensions of the militant atheists. We hope this book will enable them to understand that theism has a much stronger scientific and rational basis than atheism.

I have tried my best to keep out technical jargon (except in the chapter on evolution) so that anyone with fleeting interest can also understand the central message of this book. Most of the chapters are written so that they can be read and understood independently without referring to the other chapters, except when we discuss the incoherence among the atheists in the eighteenth chapter. Since each chapter is independent of others, there may be repetitive elements in them. The reader is advised to overlook those and focus on the central message that each chapter is conveying.

This book is specifically against the militant atheists and their arguments. Anyone not familiar with the typical smart talk of the four cowboys of militant atheism might not quite get the drift. I will try my best to set the context before giving the rebuttal but it would help if one were aware of their arguments beforehand.

Before we begin, it is important to set one record straight at the outset. Atheism is not a debate about methodologies or ethical frameworks. The common strategy of atheists is to side-track this debate into a discussion on scientific methodology or secular ethics. We will need to tread carefully here and avoid all such red herrings that distract us. Even though we will answer the questions of methodology and ethics later in the book, we should remember that atheism by definition is a specific claim that God does not exist. It is that specific claim that we will utterly demolish both scientifically and rationally in this book.

Historically, atheism has always been lame and puerile but this new kid in the block called militant atheism uses science and evolution as its twin crutches to rationalize its worldview. To the extent that all their books and web sites are more about science, its methodology, or its progress rather than about atheism itself.

Their strident smart talk and rational pretensions has a following whose numbers are unfortunately increasing. Aided by vitriolic debates and books of Richard Dawkins, Daniel Dennett, and Sam Harris, they are becoming more vocal by the day.

Against Atheism is a concise and devastating rebuttal to militant atheism. This book takes a radically new approach in Christian apologetics by critically examining their arguments and exposing their scientific and rational pretensions. By doing that, one can clearly see the poverty of their worldview and the glaring contradictions within it.

The author is deeply interested in science and religion and how they relate to each other. He has been researching militant atheism and what they have written and said over the past two decades. The conclusion he has drawn after years of study is exactly the opposite of what the militant atheists are saying. Once the glaring contradictions in their worldview became evident, he began to make notes which became a personal blog of sorts. This book is the result of those notes.