The Robin and the Raven 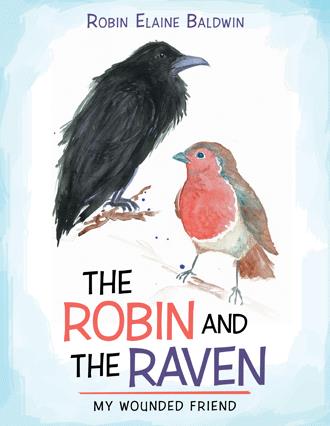 One Cloudy Day both robin bird and bobby bird were heading to the pond near their nest for a day of fun. Then swiftly a big red-eyed hawk bird came flying fast and furious towards them. The hawk swooped down and hit bobby bird so hard, he knocked him out of the air.

Bobby bird landed on his back, at the fence and was wounded. When robin bird saw this, she became fearful and kept circling around and around trying to figure out how to help her best friend. Robin bird didn’t know what to do. She had never seen something like this happen before, and she knew bobby bird was in a bad way.

Robin bird cried out to bobby bird, “Are you okay? Can you fly?” But bobby bird didn’t answer a word. The raven had the wind knocked out of him, and he was trying to right himself from the hit. He kept trying to use his wing, but it would not move, it was broken. His pain was so great, with every attempt to escape the snare the raven dug himself in deeper and deeper into the fence.

This is a story of a true event, written in an allegory form. Both the event of the two raven birds and my own personal story are one in the same. As the raven’s tragedy is underway, mine was about to unfold during the next four years. The day of the ravens, an impression came to my heart that I would write a book on these two birds as my story one day. This story is about faith, hope, love, reconciliation, and redemption. God used a true event of two birds to show us His compassion and mercy for His wounded children.

Robin Elaine Baldwin is a Missionary of the Gospel. She is a graduate of The Kings University of Van Nuys, CA. and The Billy Graham School of Evangelism. Her study focus is in church leadership, church planting, and evangelism. Robin has over 20 years of ministry experience in church ministries and the creative arts, which includes; Church Planting, Children Age Graded Ministries, Sidewalk Sunday Schools, Evangelistic Outreach, Theatre, Christian Radio, and Television.