Stories of Growing Up Together

by John Weitzel & With Lesley Himmel 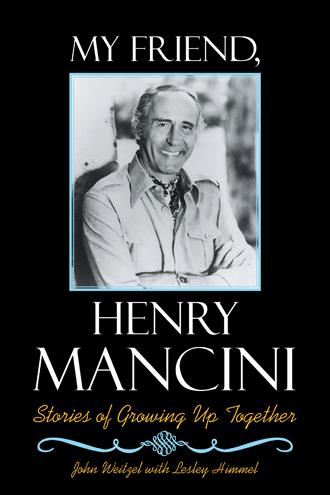 The year was still 1940. Henry and I were both sixteen years old, and we were high-school juniors. I had just gotten my driver’s license. My dad, in a questionable decision, allowed me to drive his 1937 Ford two-door sedan to school one day.

Three of my buddies, including Henry Mancini, encouraged me to skip afternoon classes and take them for a ride. Henry was seated in the front passenger seat, and my other two buddies were in the back seat. We decided to take Kane Road, a notorious “lovers’ lane” in the Pennsylvania hills. The fact that it was snowing didn’t deter us. And of course, in those days, there were no seat belts or safety features on the cars.

The boys encouraged me to see how fast I could make the car go. I got it up to fifty miles an hour! We were in the hills now, and to our right side was a very steep cliff. An unexpected curve in the road ahead led me to hit the brake. It put us into a spin on the gravel road. In that instant, all I could think of was that we were going to roll down that hill and crash.

To the world, the name Henry Mancini brings back memories of amazing songs like Moon River, The Pink Panther Theme, and hundreds more written for movies and television. This prolific composer, arranger, and conductor won Academy, Grammy, and Oscar awards. To John Weitzel, Henry Mancini is simply the name of his best friend since seventh grade in Aliquippa, PA, and throughout life. For the first time, John has shared his stories of growing up with Henry Mancini. You will smile, laugh, and even shed a few tears as you read stories of escapades the two shared. John commented, “We are confident that, even after so many years, there is still a very large audience of Henry Mancini fans who will appreciate our new stories about this beloved man.”

John Ellis Weitzel has lived a very active life. Raised by parents Lorman Bruce and Helene Janet Weitzel in Aliquippa, Pennsylvania, he grew up loving music and took trumpet lessons at an early age. Following high school, he served in the US Army during WWII. John and his wife, Dixie, earned bachelor’s degrees in music from the College of Wooster, Ohio, and John earned a master’s in music education from Columbia University in New York City. They raised two sons, Bruce and John Jr. John worked for thirty-five years as a high school band director in East Liverpool and Alliance, Ohio, winning many awards and leading his band in front of millions of TV viewers and spectators at professional football games. He is now retired and currently resides in Grand Rapids, Michigan. At age ninety-three, he remains very active—spending time with his family and friends, playing baritone horn in several bands, and telling stories of his friendship with Henry Mancini to retirement and nursing home residents and other interested groups in the area. Coauthor Lesley Elizabeth Himmel enjoyed growing up on a farm near Brown City, Michigan, with parents Nick and Alma Himmel, and siblings Susan, Beverly, Debra, and Nick. Following high school, she earned a bachelor’s degree and graduate certificate in business education from Central Michigan University and worked in the field of education. Lesley is now retired and lives in Grand Rapids, Michigan. She enjoys time with daughters Emily (Cory) and Leah (Zachary), and grandchildren Mia, Nolan, Vaughn, Brooke, and Dean, also attending church and playing in a community band.