Under a Bright Yellow Sun 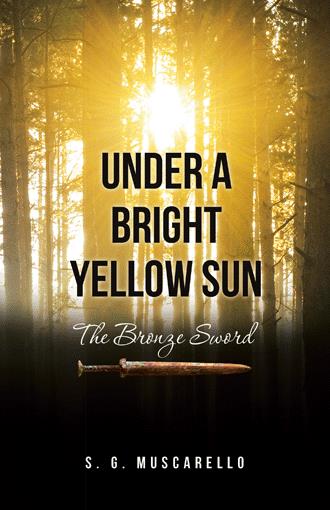 stared back, his eyes the size of saucers.

Peter watched in horror as the Tumitataken chief took a few

striding steps toward him. Andrew looked as if he was going to be

so he could gaze directly into his eyes. Andrew looked terrified and

panicked, as if he was about to scream. Peter couldn’t blame him.

After all, staring into that intimidating face from a distance was

foreboding enough. That cruel smirk of Mittowan’s was almost too

terrible to be true. Peter was sure that he must practice it at home.

toward Charlie. Andrew quietly let out a deep breath and relaxed.

Mittowan, who was now examining a frightened Charlie, scratched his

head thoughtfully as if trying hard to decide if this was his opponent.

He is the biggest coward I have ever seen! Peter thought angrily. Not

only is he not letting the Oreneans choose their own warriors, but he

is only considering inexperienced people half his age! Then a dreadful

thought suddenly occurred to him—what if Mittowan noticed his

sword and decided that since he already had a weapon, he would make

the perfect candidate? He had shown that he was cowardly enough

to choose someone Peter’s age.

to partially hide it. Then Peter’s worst nightmare came true. The

Tumitataken chief had sensed a bit of movement in the still, dismal

tension when Peter had moved his arm, and now he was looking

looking straight at him! It was the most horrible, terrifying, almost

smile spread across Mittowan’s ugly face, and he started to walk

menacingly toward the boy. Peter wanted to bolt, but his feet were

frozen to the spot. His knees felt weak and wobbly. The great serpent

paced slowly in front of him, tapping his large ugly cleft chin steadily

with his finger and continuing to thoroughly inspect him. Peter

sword, which he was still trying to partially conceal behind his hand.

But too late. Mittowan walked up to Peter’s side and lightly touched

the hilt of his sword. Although it was in its sheath, it was obvious he

could tell that it was a sword. Mittowan’s evil grin widened. Peter’s

heart raced at the speed of a thousand galloping horses.

“What’s your name boy?” Mittowan demanded in his own

Hearing his own name coming out of Mittowan’s mouth made

Peter feel almost angry for a moment. He did not know why.

“That sounds like a white man’s name,” he declared mockingly,

pointing at Peter’s very fair skin. “And see, he is a really white man.”

He chuckled at his own joke. No one else thought it was amusing.

“He wants to know how old Peter est,” Keoko whispered.

“I’m not telling him that!” Father shot back.

“If I were ya,” Keoko advised, “I would tell him. He has quite a

Orenea is a land shrouded in mystery, beauty, adventure, and peril. Its people are cursed by the ever tedious presence of an enemy tribe intent on their destruction. In such circumstances, they find a little cluster of Puritans from Plymouth Colony, trapped away from their home as a result of a terrible accident. Among which is young Peter Washingsworth. Now, the small group must work together to survive in this mysterious land… with some help from the mysterious natives. Who are they? And what does this all have to do with a ship full of people who disappeared at sea over a hundred years ago?

S. G. Muscarello is a fourteen year old author who has been writing short stories since she was eight years old. At ten she decided to graduate from short stories to something much longer – this book. It took a while but at thirteen she finally submitted this manuscript for publication. Almost all of the writing was done with just pencil and paper.