The Gospel of Fury

The World of Make Believe 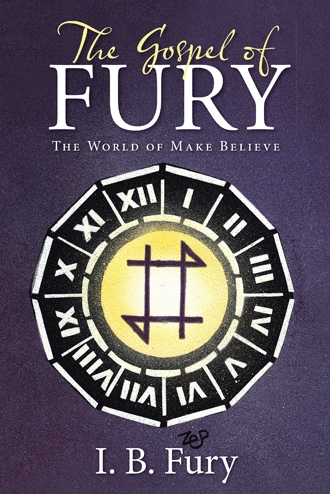 This modern testament is gospel that cherishes all years of history and belief, faith and knowing; targets every heritage and tradition as belonging to the one God, and wholeheartedly claims creation and salvation as the domain of God and heaven. Bring your skepticism and keep it near to your heart as it is golden; leave your sarcasm at the door because it is a waste of time and imagination.

Man exists now at the passing of the first epoch of humanity into the second epoch; he passes from childhood to adulthood; youth and our simpler experience gives way now to accountability and responsibility; two-thousand years have passed since the son-of-God walked the earth; exactly on time has God delivered His powerful message through the modern gospel. Angel Fury enables the progressive words necessary to embrace the past, and to mold the future as He intends. God did send what He promised at just the right time giving all things to the one life of a very real and capable man. The one life presents all the meaning we need to place ourselves safely onto the path the shepherd plans for, and to enable us to understand the history He shapes. Explore the modern gospel through the heart of Fury, be a good skeptic - weigh the stars of reality, embrace the keys to unlock His mystery, and know that He has sent the modern mission out of His goodness.

I. B. Fury authors the modern gospel using the things God made so very clear. Heaven sent stars and key do indeed unlock mystery so we provide more than faith alone for a modern world that requires good skeptics to make careful decisions. Understanding that God has delivered what He promised is a good first step; reading as a healthy skeptic is a good choice; knowing He sent the gospel for the entire world He shepherds provides a good sense of reality. The messenger is real; the message is real; be a real skeptic, and read carefully. There are things blowing in the wind that matter to heaven and earth together; this story brings heaven and earth closer together for todays progressive world. Fury and his family are all very real, and the facts that are presented as facts are verifiable. Years of research and additional writing will yield conclusions that the modern mission and the author known as angel Fury did provide truth.