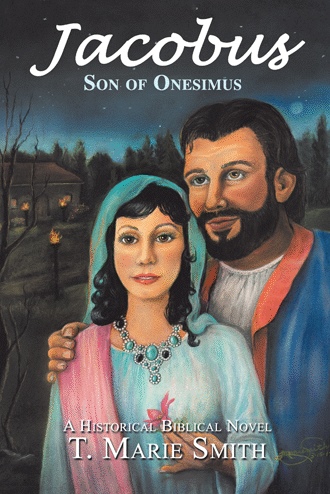 This sequel deals with the persecution of Christians as Domitian and Trajan, Roman emperors, intensify their reign of terror. After Onesimus was stoned to death by the idol-worshippers, Jacobus is determined to continue the work that Onesimus, his father, begun, even though there is now a price on his own head. Moving from one cave to the next in order to keep his family safe, he battles the elements, wild animals, and the pagans who hate him. Finally, they move to Arezzo, a small town in Italy, located at the foot of the Apennine Mountains, where they could worship openly. Here, they continued spreading the Gospel. However, soon persecution reached Arezzo, and they were sorely tested. This is a beautiful picture of love, and it will allow you to share the life of a dedicated minister of the Gospel through very difficult times.

Born in Georgia, T. Marie lived in many areas of the United States from Florida and several other southern states to North and South Dakota, Washington and the beautiful Northwest. She appreciates the magnificence of each region, but considers herself a Floridian.
T. Marie owned Ad-Art Commercial Art Studio in Fort Myers and Lakeland, FL. Later she moved to Cleveland, TN and continued free-lance art.
Known for her pastel paintings and pet portraits, much of her work can be found throughout the Southeastern United States. She also served as Graphic Designer and Make-up Artist for various TV ministries including Forward in Faith, Cleveland, TN, and Christian Broadcasting Network, Virginia Beach, VA.
Her education includes studying at Tennessee Wesleyan College, Athens, TN; correspondence courses from Lee University, Cleveland, TN; Church of God School of Theology, Cleveland, TN; and two courses from Institute of Children’s Literature, West Redding, CT.
Married to Reverend Gene Smith in 1993, she joined his ministry as pastor of Lynn Haven Church of God, Lynn Haven, FL. Continuing her studies, she received Ordination in 2007.
A Chalk-Talk Evangelist, she specializes in “invisible Chalk.”
After retiring, the Smiths began a personal ministry of “Care and Encouragement for the Widowed.”
Wife; mother; grandmother; and minister, T. Marie’s greatest desire is to be a vessel of God’s love.

Beloved, if God so loved us, we ought also to love one another.

And this commandment have we from Him, That he
who loveth God love his brother also.
1 John 11:4, 21(KJV)