Responding to a Pursuing God 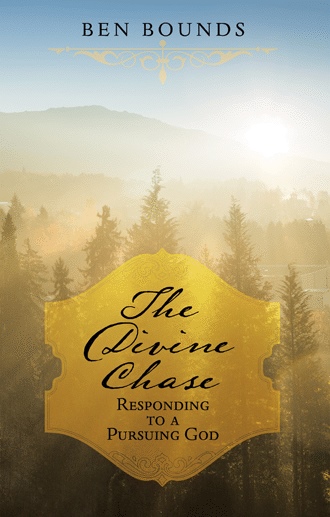 A woman runs through the fading twilight of a garden. Her breathing increases. An inkling of fear and dread are intertwined with a vague and distant hope.
How long would this rift be in her heart? It seemed so ancient. She could not remember a time without this pain. Even as a little girl, the darkness was there. The lingering sadness of it enveloped her and hurt so much, as if she had lost something and could not quite get it to the front of her mind. There was always the searching, looking, seeking, and never finding.
She awoke in the night, dreaming of it. In the darkness of her dreams, it floated along the edges of her awareness just beyond her reach. Images and pieces of thoughts and memories would flood through, but she could never embrace it, if that were even possible. In her dreams, anxiety rose, and her heart raced when she was upon it.


A woman running through the fading twilight of a garden, her breathing
increasing, an inkling of fear and dread intertwined with a vague and
distant hope.


When you see someone walking, someone familiar, the gait, the gesture, the sway. It’s all there, all noticed, all so close. The silhouette turns to you, and slowly it dawns that this is a stranger. It is not the one you thought.
She would still be searching another night, another day. Fear and hope all mixed in together. The painful beating of her heart.
“Will you give me a drink?” he had said.
His voice. Strength. Gentleness.
His eyes. She could not hide from them. How could this man see so clearly into her soul?
This is too close to her heart. This is my pain. If she did not walk this carefully, there would be tears, heartbreak and brokenness. And the river, always, there was the river. A cold, rampaging, maniacal river.
“Will you give me a drink?”
Why did she have an uncomfortable feeling that this stranger really wasn’t asking for water? Could she detect something of an offer in his question? But he was clearly thirsty. She was so incredibly thirsty as too. But she had just drunk from this same well.
Her thirst ran deeper than this well, beyond the quenching of her tongue. She felt the thirst of the human heart, and she had not fully discerned that distinction. All of the ways she had sought for quenching simply inflamed this thirst and drove it deeper into her soul.
She had drunk from another well, another river. A dirty, sewage-filled river.
A cold, rampaging, maniacal river.
It had forced itself upon her. This filthy river had caught her off guard and swept her into the darkness of the night. She was truly, deeply thirsty.
It was not just his words. His eyes pierced her. In the mysteriousness of his gaze, she felt ashamed, healed, embarrassed, humiliated, cleansed, filthy, and pure. When you bathe, you can be dirty and clean simultaneously.
Why would he stop? Why would he even ask? He had to know who she was. Maybe he was just thirsty.
He was no longer speaking, but she could still hear the question, “Will you give me a drink?”
“How can you ask me for a drink?”
Didn’t he know people might be looking? She didn’t know this stranger, but she sensed goodness in him. She didn’t want to see him hurt. It was her problem after all … her dirtiness … her river.
A river is a daunting creature. It exudes sentience. It is living. It is moving. It is breathing. It brings life. It heals. It always beckons. It draws and pulls us to sun-drenched effusions, splashing currents, and wave upon wave of resplendence. We pursue it and immerse in it. It refreshes us and cleanses us and revives us.
In the mountains it hovers and whispers and thunders and sneaks and bends and surprises with its beauty and majesty. It moves toward, onward, around, and beyond. It always moves. It is living, pulsating, and roaring. It cuts through the desert and leaves an oasis, rescuing life from death.
It resurrects.
There are other rivers. They are dead. They are filthy and stinky and contaminated. They continue to draw, to beckon. If they are dead they draw death and if they are dead they give death. They take life. They destroy. They are moving death.
They are cold, rampaging, maniacal rivers.
If you walk too close to their banks, they reach for you and pull you in and under. They will take you without mercy. They will swallow you whole. They will consume you. They will choke you and suffocate you and they will throw you down and drown you. They will deceive you. Through unrelenting darkness and crushing deepness, whatever it is that you were or sought or hoped for is gone. You have been stolen and separated.
You will be broken upon the rocks.
You have been cast away and exiled from dearness and joy, and now only one thing matters, this fissure, this rift between your soul and all preciousness.
These are rivers that run through the human heart.
She had walked too close. She had been broken upon the rocks.

God is passionately pursuing you. There is a notion in our world that we must find God, that it is on our shoulders to search for a hidden God. If God had not or does not reveal himself, we would not even know that there is a God. He is self-revealing and on a mission to provoke a response in us. He pursues us in three fundamental ways.


First, the act of creation itself is an incredible act of pursuit by God. He is the Creator-Artist, with his masterpiece in mind, and we are part of the tapestry of creation.


Second, the act of inspiring a book, the Bible, to codify his message demonstrates God as divine author pursuing us through his written Word.


Finally, the act of the incarnation is the crowning act of pursuit. Christ, the incarnate Son of God, is on a mission to rescue the love of his heart. It is the perfect fixing the broken, the highest becoming the lowest, the resurrected lifting the dying from the very grave.


God’s pursuit of us takes place on his dance floor, his universe, his masterpiece. His pursuit unfolds throughout history on our battlefields, in our crucibles, and through our worst trials. He brings the scars of his crucible—the cross—into our crucibles and rescues us. In responding to our pursuing God we find our greatest healing.

Ben Bounds, an ordained minister with the Christian and Missionary Alliance, has pastored churches across Texas for the last thirty years. Ben holds the BA degree in Pastoral Ministry and Biblical Studies from Southwestern Assemblies of God College (1988) and did graduate theological work at the BMA Theological Seminary (1989-90). Ben and his wife Linda live in East Texas. They have four adult children and six grandchildren. Ben engages in an active preaching and writing ministry.


Contact Ben at benbounds695@gmail.com to schedule preaching or speaking engagements. He may also be contacted by visiting his website www.benbounds.com or his facebook page at www.facebook.com/mercyroadministries.