Rightly Dividing the Bible Volume One

The Basics and Background of Dispensationalism 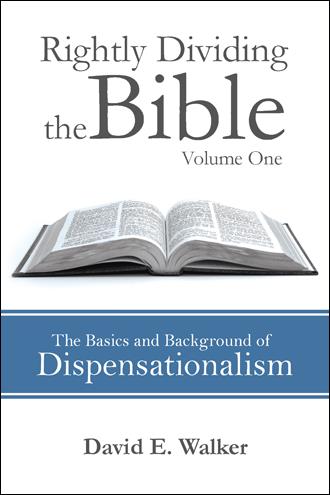 HISTORICAL PRINCIPALS IN INTERPRETATION Those who allegorize the Bible really don’t care what the context of passages are – as long as they can use them to their benefit. Sincere and honest believers will ask who is speaking when reading a passage. Just because a quotation comes from the Bible doesn’t mean what is said in that quotation is right or even good. For instance, in the book of Ecclesiastes, the author is a man “under the sun” (Ecclesiastes 1:3, 9, 14 etc.), and it is written from that viewpoint. So, when Solomon says, “There is nothing better for a man, than that he should eat and drink, and that he should make his soul enjoy good in his labour” (Ecclesiastes 2:24), that doesn’t mean you should quit going to church so you can stay home and stuff yourself. Likewise, when he says, “All go unto one place; all are of the dust, and all turn to dust again” (Ecclesiastes 3:20), he’s not giving a doctrinal statement on life after death. You must be careful when reading the Bible, because even some of Satan’s words are recorded in Scripture, but you would be a fool to follow them as instructions. The context of a word or phrase in Scripture is so very important because the context lays the foundation upon which that phrase is built. Just because a word or phrase is contained in Scripture does not validate it to be true. The words of Gamaliel sound good: “if it be of God, ye cannot overthrow it” (Acts 5:39), but are they true? The Roman Catholic Church hasn’t been overthrown yet, so is it of God? What about Islam or Mormonism? When the context of that phrase in Acts 5:39 is considered, it is clear that Gamaliel was an unbelieving Pharisee and wasn’t speaking authoritatively for God at all!
We know that God is the author of the Bible and that the Bible is intended for man, but when we deal with the specifics of Bible passages, we must be careful. The entire Bible was written for us, but not all of the Bible was written directly to us! This concept is particularly helpful while reading passages like Acts chapter two, where a distinctly Jewish message is preached to a Jewish audience. The requirement of water baptism as a prerequisite for getting the Holy Ghost (Acts 2:38) should be a “red flag” for anyone today reading the passage. Attempting to use verse 39 as proof that verse 38 should be applied to us is double jeopardy because verse 39 is actually an Old Testament quotation from Daniel 9:7 – a reference to the Jews of the dispersion, not Gentiles.
It is also important to understand that many things referred to in the Bible are purely a part of historical culture and are not commands for Christians today – some things are doctrine and other things are historical culture. For example, many Primitive Baptist churches practice foot washing, which typically “takes place after communion,” because they claim it is an ordinance for the church and should be observed based on John 13:14 where Jesus washed the disciples’ feet. Is foot washing an ordinance for local churches or just a part of the culture during the time of Christ? First, notice in John’s Gospel that the Lord is not in a local church setting like you find today; He is “in first century Palestine, where people walked long distances in sandals and where roads were dusty.” In the culture of Christ’s day, the host typically washed the feet of his guests. The next thing to listen for is the sound of crickets, because the rest of the Bible is silent on this topic. You will not find foot washing in the Acts of the Apostles or commanded in any of Paul’s epistles. Finally, we must admit that foot washing merely cleans feet and isn’t a picture of the death, burial, and resurrection of Christ like baptism (1 Peter 3:21), and neither does it commemorate Jesus’s death, burial and resurrection like the Lord’s Supper does (1 Corinthians 11). Foot washing then, isn’t an ordinance, nor does it commemorate anything but a cultural practice. If you visit a church that observes foot washing and they want you to “unloose,” just tell them to “pucker up” because holy kisses were also part of the culture of the day (Romans 16:16; 1 Corinthians 16:20, etc.)! Ron Rhodes, The Complete Guide to Christian Denominations (Eugene: Harvest House, 2005), 64. Andreas J. Kostenberger and Clinton E. Arnold, Zondervan Illustrated Bible Backgrounds Commentary, vol. 2, John, Acts, (Grand Rapids: Zondervan, 2002), 131.

An extensive, yet simple and easy-to-read book about how to properly interpret the Bible.

Dr. Walker has dedicated his time and effort in thorough research and answers most questions about dispensations and dispensationalism. Upon reading these volumes, the reader will find himself, not only well informed, but also with a great wealth of reference material for future use.
—Dr. David Peacock, Pastor, Bible Believers Baptist, Jacksonville, Florida.

GET THE BACKGROUND—The excuse that there are “so many interpretations of the Bible” is exposed with a clear concise defining of biblical terms, using the Bible itself to define those terms.

DISCOVER THE HISTORY—Learn about the men, manuscripts, and movements that have shaped views of Bible interpretation. Find out who really believed the Bible and those who merely used the Bible to support their opinions.

UNLOCK THE PROPHECIES—Many prophecies are unraveled and shown how they relate to the return of Christ, the church, and the nation of Israel.

Dr. David E. Walker (B.D., Th.M., Th.D.) is the pastor of Calvary Baptist Church in Monticello, Florida. He also serves as the dean of students for The Bible Doctrine Institute - an online Bible institute. He has written books covering both basic and advanced Bible topics.