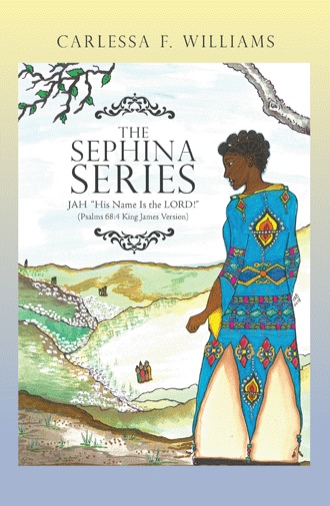 of his kingdom. As Cooran approaches the throne and bows, the

king asks with an excited smile, “How was your journey?”

But before his son can answer, the king tells him with great

Cooran looks up with great surprise and asks, “Father, you have

the answers to both of your dreams?”

The king says excitedly, “I’ve got the answer to my dreams and

a whole lot more. Let’s go to my chamber to discuss this before we

meet with the others.”

They both proceed to the king’s chamber, where King Rohaan

freely dances with delight. Cooran is surprised at the delightful

a few days before.

King Rohaan tells his son of the unbelievably great things that

took place during his absence from Daaveran. He tells Cooran the

meaning of his dreams, the plan that was given to save his people

and his kingdom, and the person he has chosen to make sure this

plan works. Finally, he tells Cooran about the beautiful maiden,

once a servant to the captain of the guard, who had told him of her

God—Jah, who gave the dreams, the interpretation, the plan, and

“And this maiden is perfect for you, Cooran! She will make you a

Dumbfounded, Cooran responds, “And you have known her

for how long? All of several hours, and you now know that she is

perfect for me?” Cooran whines, “Father!”

“Let me meet with the other officials for a final discussion, and

then we shall all dine with this maiden, Sephina, and you will see!”

the king tells him.

“Yes, that is the maiden’s name,” King Rohaan says. “Did I not

The king now looks rather puzzled himself, but is still smiling

King Rohaan then informs his son that he plans to make

the special announcement during his birthday feast. Cooran is

thankful, excited, yet confused by all the information his father has

Cooran quickly goes to refresh himself before heading to

the dining chamber. As he cleans up and changes his attire, he is

giddy with excitement at the possibility of his “little one” being

here in the land of his birth. But how can that be? Sephina,

Cooran shakes his head quizzically and says out loud, “No way

this maiden could be my Sephina.” He hesitates and thinks, Nah …

no way! Then he hurries to the celebration.

As King Rohaan meets with his top officials, he discusses the

situation. He tells them how his dreams reveal a period to come,

having seven years of plenty, with good harvests, and then seven

years of famine—no rain and no full harvest. Nothing but death

and suffering can be expected, if Jah’s plan is not properly followed.

The king tells them about the maiden Sephina and how

impressed he is by her ability to interpret dreams, her confidence

in her God, and her beauty. He lightly jokes about appointing her

to Cooran as his wife. They all chuckle.

The king then shares with them his chosen appointee. They all

agree that the king has made the perfect choice. They all leave

to quickly refresh themselves before joining the others.

head to the dining chamber together. Cooran, on the other hand,

arrives by himself. He got so caught up in his thoughts, he believes

he is the last to arrive at the dining chamber. When Cooran finally

joins the others, their special guest has not yet arrived.

Just as they sit, the large and beautifully carved wooden double

doors open, announcing their special guest. As she enters the

dining chamber, all the men stand and are in awe of her beauty.

surroundings, and to be there is truly remarkable.

Sephina’s thoughts immediately turn to the faithfulness and

truth of Jah, the God whom she serves and trusts with her very life.

Sephina then whispers, “Jah, You are so faithful.”

Sephina is not yet aware, but she is being escorted to be seated

next to King Rohaan and his son, Prince Cooran. As she comes

closer, Cooran smiles excitedly, thinking that his father might be

right in saying that she is perfect for him. Then, to his surprise, he

village, town, territory, and kingdom he has traveled over the years.

But now here she is, walking toward him. He then asks himself if this

is the maiden his father told him of. Though he is rather excited, he is

again puzzled, because he had hoped from his father’s description

that she might be a friend from his youth. He is now totally confused;

yet the mysterious maiden is being escorted ever closer to him.

Then Sephina stops in mid-stride and says just above a whisper,

“Cooran?’ His mind races and is dizzy with confusion, as he sees

her lips form his name.

Cooran moves from the table toward her, as everyone looks

on in utter surprise. He now knows her, but not as the mysterious

and beautiful maiden he first recognized. It is … is it really? … He

then softly calls out, “Sephina? My ‘little one’—is that really you?”

Everyone is surprised! The king is so excited he can hardly

toward each other. They both stop short, looking incredulously at

each other. And then they embrace.

The Sephina Series is a fantasy book based on the biblical story of Joseph, one of the twelve sons of Jacob. Sephina is a fictional Nubian female character depicting the life of Joseph with several twists. The Sephina series reads like a fairy tale of a princess, her prince, and her God. It comes complete with the “happily ever after” ending and all of life’s challenges, opportunities, and drama in between.

Carlessa F. Williams is a self-employed accountant with a heart for evangelism. She worships, fellowships, and serves at Words of Life Fellowship Church in North Miami Beach, Florida. There she has learned and continues to learn numerous biblical principles that deeply influence her walk with God. Her desire is to encourage young people to live an abundant, exciting, joy- and love-filled life totally dedicated and pleasing unto God and to inspire others with these life-changing truths.