A Preacher’s Son Who Had It All, Lost It All, and then Regained True Wealth

by Mike Hardwick With Dava Guerin 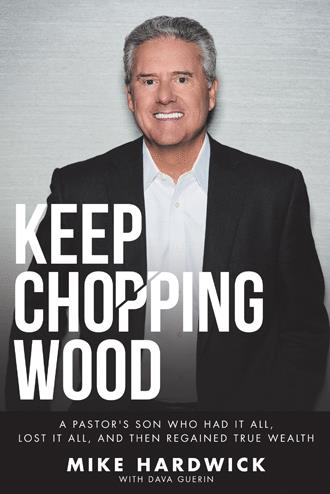 My Coincidental Education: From Theology to the Market

Everyone in life has a calling. In many ways I thought mine would be fairly obvious and straightforward. Either I would become a pastor like my dad or a professional musician. I certainly grew up in the church and was blessed by having the very best education anyone could have in that regard. I was surrounded by talented musicians who gave me the love of melodies and the written word, and at 18 years old I was convinced that either one of those pursuits would be my own life’s calling.

Little did I realize at the time that one chance encounter with a naked man in a health club would change my life; God surely had a different plan for me, though it was somewhat strange how it un-folded.

Gateway College was a school that focused on theology and music, and many of my friends who went there had dreams of either becoming a pastor or a professional musician, just like me. In high school most of my friends knew that because I was the “preacher’s kid” I didn’t smoke or drink. They enjoyed hanging out with me because I always liked to have fun and also because I could be their designated driver. Their parents felt the same way and thought I was a good influence on their children. But the truth is I loved sports way too much which affected my grades for sure, and piano lessons were my nemesis. Regardless, I entered college hoping either theology or music would be my “calling.”

One of the requirements of being a theology major was that every student was required to preach. Yes, actually prepare and deliver sermons to a live audience. We had to do this at small churches around the Greater St. Louis area, and I soon discovered it was not for me. I never felt comfortable and was always very nervous. Maybe it was because dad was so good at it and I just never felt good enough? I remember struggling to write words that I thought would be meaningful and that folks would want to hear.

But a funny thing happened during my college days. While I was starting to realize that being in the ministry was not a calling like it was for dad, I realized something that to this day I am grateful. That is being a theology major taught me to really dig deep into the Bible and learn much more than I ever would have if I had gone in another direction. There are so many things I know today that I learned by reading and actually studying the Bible, especially how to live like Christ would want me to live. And, also because I was also a music major, somehow the two disciplines gave me a spring in my step and the ability to think deeply about the world around me. Studying theology and music for so many years helped develop in me a type of daily discipline that really paid off in my future business years. I simply had to commit to a daily routine of study and practice in order to learn and advance in my college years.

When I reached a point in my twenties that I actually began to think seriously and critically about my future career I had completed my first undergraduate degree at Gateway College. I knew I had to get serious about my future, and the best way for me to do that, I thought at the time, was to get another degree in business and finance. I had come to realize while at Gateway College in St. Louis, Missouri, that first, I didn’t feel God’s calling for me to become a minister and pastor of a church, and second, that while I played the piano and baritone horn reasonably well and was a fairly good singer, I just wasn’t at the level to do any of those occupations professionally. Luckily for me, after I graduated from Gateway College I immediately applied to Belmont University in Nashville and they accepted many of my class credits from Gateway College; I was able to complete my BBA Degree in Finance in just two years.

Right before I graduated, my Uncle Jim Hardwick, who happened to work for First American National Bank in Nashville, asked me if I wanted to consider getting a part time job there. Uncle Jim had started his own business career after studying at Vanderbilt University and was the branch manager of the bank’s Donelson branch office while another Uncle of mine – Joe Carson, was the branch manager of the Harding Mall branch of First American National Bank. There is nothing like having uncles in your life. I grew up being a sports fanatic and both Uncle Jim and Uncle Joe were very good athletes in several sports. When we were boys they would take Steve and me to baseball and football games all over Tennessee and beyond. Uncle Joe even took us on weekend road trips where we would watch the Cincinnati Reds play at the old Crosley Field in Cincinnati, Ohio. We visited so many putt-putt golf courses where we would be thrilled to putt our way into the fire-breathing dragon’s mouth or the pirate’s wooden leg— earning endless accolades from our uncles and passer’s by. We were fiercely competitive for sure!

Keep Chopping Wood is an engaging and inspirational book that tells the colorful life story of Lawson H. (Mike) Hardwick, III, one of the most well-known businessmen and philanthropists in Nashville, Tennessee and around the country. He tells his story with passion and heart, from growing up as the son of a pastor, who founded a church in Nashville that grew to roughly 8,000 members during his tenure of over sixty years, to building many successful businesses, surviving depression and creating a corporate culture dedicated to serving others. His compelling story is also filled with life lessons on how to achieve  a better and happier life which he shares in a lively and interesting manner. Readers from all walks of life will enjoy and learn from his many experiences and reflections as well as his captivating storytelling.

Lawson H. (Mike) Hardwick, III, is the founder and president of Churchill Mortgage Corporation, a national mortgage banker headquartered in Brentwood, Tennessee. Hardwick is a highly successful entrepreneur and seasoned businessman who has built and managed businesses in the financial and real estate industries. He has also created a corporate culture based on a “people versus profits” philosophy, and as a faith-based business encourages all employees to give back to the community. Hardwick graduated from Gateway College with a Bachelor’s Degree in Theology and Music, and went on to earn a BBA Degree in Finance from Belmont University. He has served on various corporate and industry boards and committees, and is a sought after speaker on a variety of subjects including general business, real estate and finance.