Parenting from the Best of Both Worlds 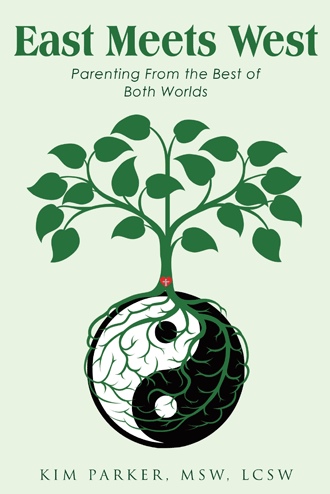 Another example of ancient mindfulness practice making its way into popular Western culture is the 2008 Dreamworks animation, Kung Fu Panda. This hit movie practically made some aspects of traditional Chinese culture palatable for American consumption. In fact, art director Tang Heng and production designer Raymond Zibach spent years researching Chinese sculpture, architecture, painting, and kung fu films to help bring authentic Chinese culture to the film. The lead character—a clumsy, insecure panda named Po—musters up some courage to protect his village from an oncoming evil threat—the snow leopard Tai Lung. Po believed that he was to protect “the secret to limitless power,” which was supposed to be inscribed in the Dragon Scroll from getting into the hands of the evil leopard. However, after putting up an awesome fight with his master trainer to retrieve the scroll in order to have limitless power to fight the evil leopard, both the master and his apprentice discovered that the scroll was blank. It was just a reflective surface with no writings, teachings, or secrets whatsoever. Po then lost confidence in his ability to defeat Tai Lung or protect the village.

Feeling hopeless, the young panda returned home discouraged. There, his father revealed yet another secret, that the “secret to the secret-ingredient soup” is nothing. All this time, Po had loved his father’s noodle soups and believed that there was a secret to what made it so special. Finally, he realized that it was all in the mind, the placebo effect. Whatever his father had said about the noodle soup had him imagining that there was something grand and special to the ingredients. This manufactured mental delight/awe had served its purpose—allowing the son to enjoy the soup and market it effectively. Upon discovering this truth, Po finally makes the connection that if there was no secret to the secret-ingredient soup, and yet it could still be so delicious, surely the secret to the scroll of limitless power was within himself. Once he understood that the key power in the blank scroll was the power of the mind, and Tai Lung did not know this “secret,” Po gained confidence to fight the evil leopard to defend the village.

So, what do non-secrets and Jedi mind tricks have to do with parenting? Oftentimes, we parents tend to lose hope and courage when our kids don’t behave the way we expect. The competition for parental success seems to get steeper as our kids get older. Friends’ children tend to outshine ours, either academically, athletically, socially, in extracurriculars, or in some other way. While social media is a wonderful tool for parents to show off their pride in their children’s successes, it also serves as a stumbling block for many hardworking parents who are not mindful that only a fraction of the parenting story is being depicted online. Who wants to post pictures of crying, whining, fighting, disobedient kids?

With the onslaught of nontraditional family values exhibited in the media, conscientious caregivers often feel that they are training up kids against the prevailing but corrupt worldly influences. On top of that, we have to listen to our hard-sought investments argue with us, put us down, sneer at us, and take us for granted. We become frustrated that our idealistic dreams of raising a child to be better than us may not be fruitful after all. We become stressed that our naïve visions of putting our child on the path of the straight and narrow to make a positive difference in this world seem to be going nowhere. We compare ourselves to the Jones or the Nguyens relentlessly. Parenthood can become so difficult just a few years into the journey that we forget our ideals, our lofty values when we first started out. That’s why it’s important to maintain focus.

Training your mind to work for you is going on the offense. While I believe that playing offense is most effective, my husband believes the best offense is a strong defense (yin and yang again). While he’s mainly talking about football, I believe these ideas apply to the parent-child relationship as well. Parents who remember that children are not our enemies can cope much better when these precious beings manage to deplete all of our precious energy in a single day. You, any current spouse, and children (biological, step, adopted, foster, any other type) are all on one team. Differences will undoubtedly arise when you have any two humans in a relationship. As family, we need to remind ourselves that we are not a threat to each other. We do not need to react in the three Fs of survival instincts (see chapter 10). It’s especially pertinent to remember this when we are interacting during stressful, conflicting moments. The more we’re mindful of this one-team paradigm, the more we can stay focused on strengthening each other and solving problems together. Blaming, or attacking a family member as if one wins when one loses, keeps us in the perpetual mire of stress and conflicts. If your spouse loses an argument with you, you lose as well. If your child feels attacked by you or is demeaned by you, then you lose as well.

Taking the parenting responsibility on the offense does not mean that we completely ignore defensive strategies. But I say go on the offense because playing defense in parenting is tiresome, unending, and unsatisfying.

Parenting can be the toughest journey a person ever makes. The author transparently addresses the difficult parts of this role while pointing us to some practical ways of thinking and relating with children to lighten the responsibility. This book is as fascinating as Amy Chua’s Battle Hymn of the Tiger Mother memoir, as relatable as Jen Hatmaker’s Christian foibles, as uplifting as Iyanla Vanzant’s inspirational messages, and backed by solid research of the likes of Brene Brown. By deftly combining four of America’s favorite genres into one enjoyable read, the author does not force us to compare and choose one world view over another, but honors all.

Kim understands the unique challenges and opportunities that arise when you’re parenting in a culture different than the one in which you were raised. Her words are wise and just what you need to figure out what is best for your family!

—Jill Savage, author of Better Together: Because You’re Not Meant to Mom Alone

This is an insightful book, full of sound and practical advice. I highly reccommend it.

—Dr. Helen Mendes Love, MSW, author of Reflections on the Upsides of Aging

Kim gives invaluable insight on the intricacies of parenting in a more globalized and culturally-relevant world, while respecting tradition and heritage.

Humorous, yet educational, this book is a must read for any parent.

Kim Parker is an American social worker and therapist of Chinese Vietnamese descent. A young refugee from the fallout of the Vietnam War who was sponsored by a Christian church to come to America in 1979, Kim has journeyed through identity crisis, adopted the culture of her new homeland, found Christian faith, and years later even married Philip--a white Southerner from her sponsoring church. She is now sharing her personal story to honor the sacrifice of her amazing parents and glean from the wisdom of ancient eastern religions and philosophies as it relates to parenting. Together, Kim and her husband are parenting three precious boys from the best of both Eastern and Western traditions.