48 Stories for Use in Christian Worship and on Other Occasions

by Brian A Curtis 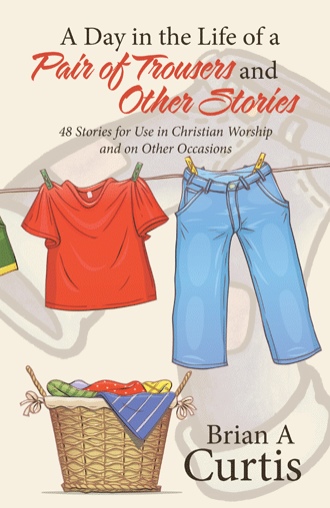 1. A DAY IN THE LIFE OF A PAIR OF TROUSERS

Theme: Not to hold a grudge

It was getting light and the pair of trousers, hanging in the wardrobe, were feeling good about themselves. They’d only been washed the day before, and it was relaxing sleeping in the darkness of the cupboard. Then all of a sudden, the wardrobe door opened, a pair of hands appeared, and they were whisked off the coat hanger and being filled with their owner’s legs. They were off, and for a pair of trousers what lay ahead could be quite an adventure. People did all sorts of things. And what adventures lay ahead of those trousers… well they could only wait and find out.

Now the morning started quite normally. They were taken to the kitchen for breakfast, and had the usual bit of milk and cereal slopped on them. Then there was the dog that came and sat upon them. But the trousers didn’t complain and they didn’t hold a grudge. After that, it was out of the house to . . . well who knows where.

However, as they were being walked along the street, the trousers recognised where they were going—they were going to the shops. And it wasn’t long before their owner sat down and had a break. But when he did, this time it wasn’t milk and cereal that the owner slopped on them, but a bit of ice cream. And bbbrrr that felt cold.

But that wasn’t all. At lunch time the trousers had a whole meal dropped on them. And on the way home, a car went speeding past, and it found the only muddy puddle that could be found. And, well . . . you can imagine the rest. But still the trousers didn’t complain, and they didn’t hold a grudge.

By the time they got home that afternoon, the trousers looked a real mess. But the trousers had been around long enough to know what would happen next. In no time they were being taken off, and being put in the wash.

The trousers breathed in, ‘Here we go again’, as they had powder thrown over them, and as the water began to run. And the trousers held their breath as the bowl began to spin. But before long, they found themselves being hung up to dry. And then, a little later, a hot— very hot—iron was run all over them. But still the trousers didn’t complain and they didn’t hold a grudge.

But by the end of the day the trousers were content. All clean, and peacefully hanging up in the cupboard, where they could have a decent night’s sleep. It had been a big day.

However it wasn’t long before it was dawn again, and all of a sudden the wardrobe door opened and a pair of hands appeared and grabbed them off the hanger. And for the trousers everything began to happen all over again.

You know for all of us life is mostly routine, but a routine where little adventures happen on the way. And just like the pair of trousers, during those adventures we often get dirty, and not always of our own making. Because apart from our own dirt, we have other people’s dirt thrown at us too.

Now the Apostle Paul had some very good advice about that. He said that we should not let our anger cause us to sin; that we should not let the sun go down whilst we are still angry (and we can find that in the Bible in Ephesians 4:26-27). What he meant by that, is that we need to deal quickly with the dirt that comes our way; that we are not to make a big deal of things, but quickly put it all behind us. And that is what the trousers in our story knew so well.

So when something happened to the trousers in the story, they never complained, and, more importantly, they never held a grudge. Whatever was thrown at them, they just got on with life. Life was too short to hold a grudge. But can we say the same?

A Day in the Life of a Pair of Trousers and Other Stories: 48 Stories for Use in Christian Worship and on Other Occasions offers worship leaders a treasury that opens up the Scriptures to children.

The storyteller, Brian A. Curtis, recognizes the deep need for churches to share biblically grounded stories with children who come to worship, especially in congregations where worship tends to cater to adults. He also acknowledges the difficulties faced in asking children, who are unfamiliar with church practices, to gather at the front of the church. As a consequence, A Day in the Life of a Pair of Trousers and Other Stories is designed to work well with children, particularly with those who wish to remain seated with their families.

The stories use simple, colourful, and enchanting language to tell memorable tales that bring key biblical themes and texts to life. They can be read aloud, straight from the page, to children of all ages. Indeed, adults may well be found listening and engaged in the stories. Forty-four of the stories stand on their own. The remaining four are linked in episodic format intended to be used over consecutive worship services.

This collection of forty-eight stories equips worship leaders to offer uplifting biblical messages to children, especially to those who may be unfamiliar with Christian worship.

Brian A. Curtis, born in Kent, England, worked in insurance before emigrating to Australia, where he studied theology and was ordained by the Anglican Church. He has served in ministry and worked with welfare recipients and people facing long-term unemployment. His passion calls him to promote a deeper appreciation of the Scriptures.